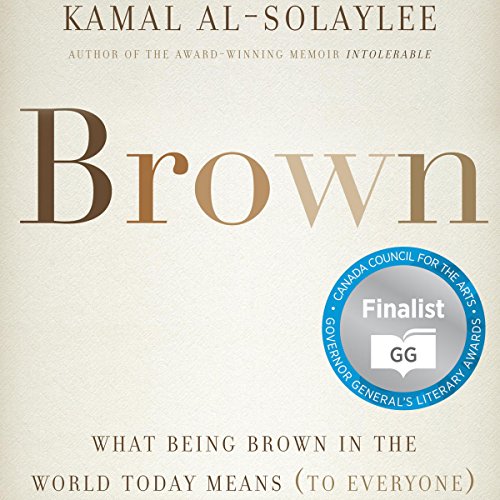 What Being Brown in the World Today Means (to Everyone)
By: Kamal Al-Solaylee
Narrated by: Fajer Al-Kaisi
Length: 9 hrs and 42 mins
Categories: Nonfiction, Social Sciences
4 out of 5 stars 4.3 (4 ratings)

Winner of the Shaughnessy Cohen Prize for Political Writing

With the urgency and passion of Ta-Nehisi Coates (Between the World and Me), the seductive storytelling of JD Vance (Hillbilly Elegy) and the historical rigor of Carol Anderson (White Rage), Kamal Al-Solaylee explores the in-between space that brown people occupy in today's world: on the cusp of whiteness and the edge of blackness. Brown proposes a cohesive racial identity and politics for the millions of people from the Global South and provides a timely context for the frictions and anxieties around immigration and multiculturalism that have led to the rise of populist movements in Europe and the election of Donald Trump.

At once personal and global, Brown is packed with storytelling and on-the-street reporting conducted over two years in 10 countries on four continents that reveals a multitude of lives and stories from destinations as far apart as the United Arab Emirates, the Philippines, the United States, Britain, Trinidad, France, Hong Kong, Sri Lanka, Qatar, and Canada. It features striking research about the emergence of brown as the color of cheap labor and the pursuit of a lighter skin tone as a global status symbol. As he studies the significance of brown skin for people from North Africa and the Middle East, Mexico and Central America, and South and East Asia, Al-Solaylee also reflects on his own identity and experiences as a brown-skinned person (in his case from Yemen) who grew up with images of whiteness as the only indicators of beauty and success.

This is a daring and politically resonant work that challenges our assumptions about race, immigration, and globalism and recounts the heartbreaking stories of the people caught in the middle.