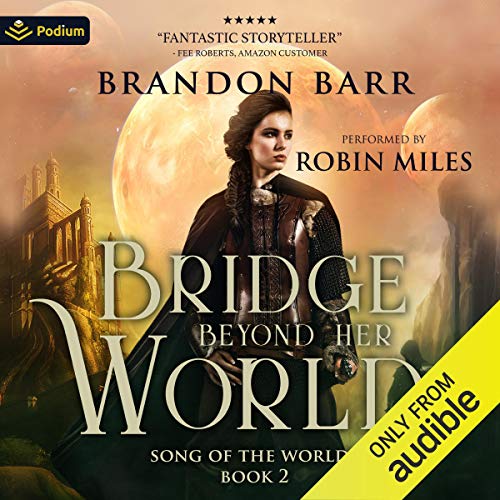 Bridge Beyond Her World

By: Brandon Barr
Narrated by: Robin Miles
Try for $0.00

Can Winter’s visions save her and her brother? Winter and Aven are thrust into the Guardian order. Winter clings fiercely to her god-given destiny as she discovers the mysteries of the Guardians and the portal that exists on her world. But her visionary gift is no longer a secret, and she soon finds herself face to face with assassins, Shadowmen, and a new terrifying vision of the future.

Meluscia’s hunger for intimacy burns ever brighter. Her eye remains on Mica, and her desire for him pushes her beyond boundaries she never dreamed she would cross. Despite the rejection from her Father and her failed attempts to attain the throne and bring peace to her kingdom, has she actually lost her power? Or does hope remain?

Savarah’s mission to destroy her master’s work continues, but her killing spree must come face to face with Osiiun, the only man in the realm capable of striking fear in her well-armored heart.

What listeners say about Bridge Beyond Her World

Wow.
This makes three in a row that have utterly wowed me!

As with the previous book, Robin Miles narrates beautifully, with an excellent assortment of voices. My one quip is that sometimes her inflections do not match the descriptions of the voices.

This one brings in a much stronger Sci-fi element and begins to tie things together while simultaneously bringing in quite a few new threads.

I have a strong sense of where this seems to be heading and I can't wait for the rest of the series to take us there.

I love the dynamic between Winter and her brother, and the new elements with Pyke are absolutely brilliant!

While she is extremely well-written, I'm really starting to dislike Melluscia. Her questionable ethics in the first book didn't bother me too much, but in this one she takes a downward turn that while 100% in keeping with her character, makes her really unlikable for me.

The cast of side and supporting characters grows considerably here, and (blessedly) does so without the pages and pages of Backstory that worms its way into so many epic fantasies.

As I've come to expect from Brandon Barr, the prose is almost flawless, leaving my attention free to focus on this wonderful story that is building into a true epic.

I definitely recommend this series to anyone looking for a brilliant epic fantasy, particularly if you like a little science fiction mixed in with your fantasy.

Book two is a book of journeys, for both Winter and Meluscia. Winter's visions begin to grow, but can they save her brother? The mystery of the Guardians is slowly unravelling. Meluscia is joined by her sister on her journey for peace; and I am still finding it a little confusing with all the characters coming in and out.

That said, this series where sci-fi meets fantasy is something of an epic