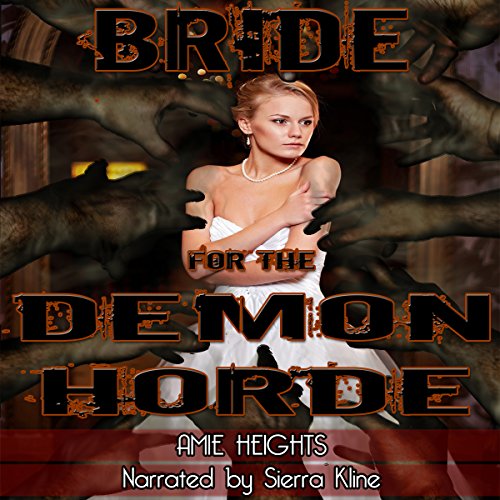 Bride for the Demon Horde

By: Amie Heights
Narrated by: Sierra Kline
Try for $0.00

When Jenna Malcone left for work on a normal day, she had no idea how her life was going to change. Taken by the wicked minister, Solomon, she finds herself in the middle of a profane wedding to free a demon horde from the abyss - with her as the bride! Jenna's body might not be able to consummate the unholy union, but the swarm of monstrous demons will try like hell to make her theirs forever.

The dark, naked bodies rose from the shadows. Jenna was too terrified to scream, unable to run, and could only watch in horror as she saw the forms of the demons take shape before her. Unnoticed, her bouquet fell from her trembling hands to land on the floor at her feet. Jenna turned back to the minister, and saw that he had a perverse grin spreading wide on his face. His blasphemous ceremony had worked, and the demon horde was becoming incarnate to take their bride.

She had agreed to this, she had said the words "I do", but now everything was becoming too real.

The figures were dark-skinned and shaped like hulking human men, for the most part. Their muscles rippled in a grotesque parody of natural life, and a dark smoke emanated from their pores, dissipating in the cathedral. Jenna realized that she could smell the soot from where she stood, a heady pollution with the scent of brimstone and fire. She saw that there were at least 20 of the monsters coming for her, their eyes glowing pale yellow, greedy for her flesh.

Suddenly, Jenna found that the fear had flipped a switch inside her. She regained enough control of herself to run. She turned to flee, spinning as fast as she could, her wedding dress billowing out behind her. Before she had taken two steps, her feet caught and she tumbled to the stone floor of the cathedral. Glancing over her shoulder, she saw the creatures were nearly to her already, their arms reaching for her where she had fell.

What listeners say about Bride for the Demon Horde