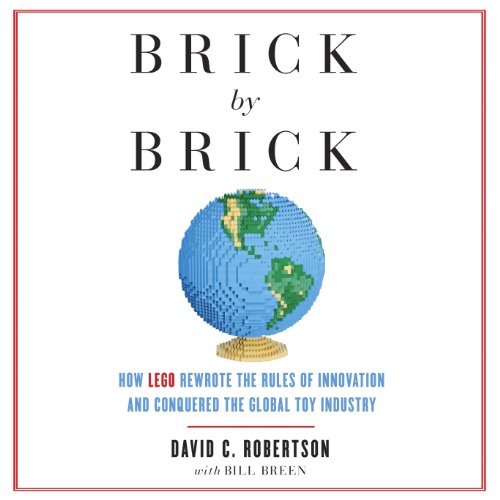 Brick by Brick takes you inside the LEGO you've never seen. By following the teams that are inventing some of the world's best-loved toys, it spotlights the company's disciplined approach to harnessing creativity and recounts one of the most remarkable business transformations in recent memory.

Brick by Brick reveals how LEGO failed to keep pace with the revolutionary changes in kids' lives and began sliding into irrelevance. When the company's leaders implemented some of the business world's most widely espoused prescriptions for boosting innovation, they ironically pushed the iconic toymaker to the brink of bankruptcy. The company's near-collapse shows that what works in theory can fail spectacularly in the brutally competitive global economy.

It took a new LEGO management team - faced with the growing rage for electronic toys, few barriers to entry, and ultra-demanding consumers (10-year old boys) - to reinvent the innovation rule book and transform LEGO into one of the world's most profitable, fastest-growing companies.

Along the way, Brick by Brick reveals how LEGO:

Sometimes radical yet always applicable, Brick by Brick abounds with real-world lessons for unleashing breakthrough innovation in your organization, just like LEGO. Whether you're a senior executive looking to make your company grow, an entrepreneur building a startup from scratch, or a fan who wants to instill some of that LEGO magic in your career, you'll learn how to build your own innovation advantage, brick by brick.

“A valuable read for any business leader or student, but will also delight those familiar with the beloved toy.” –Publishers Weekly starred review

"A fascinating book. The story of how Lego came perilously close to disaster but then transformed itself into one of the most successful and innovative companies in the world serves both as an inspiration and an object lesson." -Chris Anderson, bestselling author of The Long Tail and Makers

" Brick by Brick is a fascinating study of an iconic toy company that figured out how to stay relevant in a rapidly changing market by returning to its core values and the guiding principles that made it a success in the first place. A must-read for any executive struggling with change." – Bryce G. Hoffman, journalist and author of American Icon: Alan Mulally and the Fight to Save Ford Motor Company

"In an era filled with so many disheartening stories of corporate failure its refreshing to witness the turn-a-round  success of one we have all grown up with during our childhood and that will  continue for generations to come." –Adam Reed Tucker, LEGO Architectural Artist

“David Robertson and Bill Breen have done a wonderful job explaining brick by brick why Lego is loved around the world and what it took to keep this product at the center of toy industry for so long. Like Disney, Lego’s success can be attributed to their drive for innovation, creativity and persistence. While the bricks are loved by children, Brick by Brick is for any business person wanting to understand what it takes to be great.” –Lee Cockerell, executive vice president (retired and inspired), Walt Disney World Resort, author, Creating Magic and The Customer Rules


From the Hardcover edition.

What listeners say about Brick by Brick

Not a biography of lego

Maybe its my own fault, but I was very disappointed to discover that this book was not about the history of Lego but instead a business case study of recent events. If you’re in an MBA programming doing a paper on Legos transformation, this is the book for you. If you want to hear the long and rich history of this famous company you’ll have to look elsewhere.

Okay read but gets long near the end

Would you recommend Brick by Brick to your friends? Why or why not?

Yes. Some great background and business lessons on a private and somewhat sheltered iconic company.

Have you listened to any of Thomas Vincent Kelly’s other performances before? How does this one compare?

Was Brick by Brick worth the listening time?

I thought the author tried to force the story a bit into his innovation framework, which is overly generic in my view.

This book shared interesting insider story of how the company turned around from the downturn in the 90s to revival in the 2000s. As the author tried to criss-cross the history in various cuts, the story was repetitive to significant degree, but as a LEGO enthusiast, it was tolerable. I would not recommend this book to people who just wants to understand the cause and effect of how the turnaround occurred, as the author could not crystallize it himself either.

I love Legos so it was a great recent history of the company and some bad business habits to steer clear of. Great narrator.

This was a well written, and we'll researched book. The insights on innovation should be read and applied by every business leader today. Fans of LEGO will likely enjoy it for the anecdotes, but the story and history of LEGO is only weaved into the business perspective... so fans may find the majority of the book boring. That said, I found the business side fascinating and frankly brilliant.

nice to listen to, but not that insightful

nice and easy to listen to, but not as insightful as I had hoped and not very compelling storytelling

Not for kids but interesting

This book tells about the rise and near fall of Lego from the point of view of a business.
My kids turned off after a couple of hours but I always enjoy turn around business stories about products I know.

This was more a business case study than a discussion of all things Lego. Nevertheless is was very interesting.

I got both some great business insights AND some good Lego insights.

I did occasionally seem (as some reviewers noted) that it was a set of distinct case studies "smoothed" into a coherent narrative, but it generally flowed well.