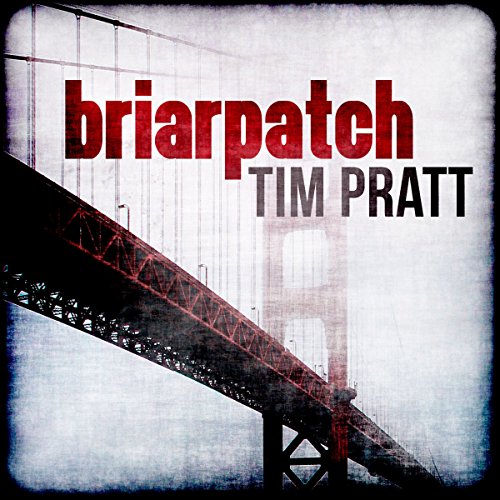 By: Tim Pratt
Narrated by: Dave Thompson
Try for $0.00

Darrin's life has been going downhill ever since his girlfriend Bridget walked out on him without a word of explanation six months ago. Soon after losing her, he lost his job, and his car, and eventually his enthusiasm for life. He can't imagine things getting worse - until he sees Bridget again, for the first time since she walked out, just moments before she leaps to her death from a bridge.

In his quest to find out why Bridget took her own life, he encounters a depressive (and possibly immortal) cult leader; a man with a car that can drive out of this world and into others; a beautiful psychotic with a chrome shotgun; and a bridge that, maybe, leads to heaven. Darrin's journey leads him into a place called the Briarpatch, which is either the crawlspace of the universe, or a series of ambitious building projects abandoned by god, or a tangle of alternative universes, depending on who you ask. Somewhere in that disorderly snarl of worlds, he hopes to find Bridget again.

What listeners say about Briarpatch

A fun experience, as expected from Pratt

I really enjoyed my trip into the Briarpatch. The world was built well, and the characters were interesting to watch develop which did a good job of making me feel sympathetic toward them. There were a few points where I couldn't follow a characters logic, or they reacted in a way that I found hard to believe, but it was usually amusingso it didn't bother me much. Plus they're in a fantasy world so unexpected reactions are expected at times.
I also really enjoyed Dave Thompson's reading, he really gave me a feel for the characters.
I hope to see more from the both of them, maybe even more trips into the Briarpatch.

I downloaded this book after listing to a podcast by the narrator and was not disappointed. I thought the story line was very original with plot twists and turns. The book did what I want a book to do: Take my mind to a different reality. This was my first Tim Pratt book, and I liked this enough to seek out more of his writing.

Makes you want to find the Briarpatch

Would you consider the audio edition of Briarpatch to be better than the print version?

Sure! Dave Thompson's performance was done so well it definitely added to my enjoyment of the story. I really love performers that use different tones for each character without being obnoxious about it.

What was one of the most memorable moments of Briarpatch?

The descriptions of this crazy alternate realm, the awesome concept, the very real and complex characters

Simply tasteful and memorable. I really love performers that use different tones for each character without being obnoxious about it.

The summary provided is a bit misleading and sort of makes the work sound cheesy and tacky, so if you feel like this might not be for you due to the description, don't be thwarted

Would you listen to Briarpatch again? Why?

I have every intention of listening again. In fact, I had read the book already when I bought the audiobook, I love the story that much. Dave Thompson narrating Tim Pratts words is a perfect match.

Darrin is a wonderful character. Certainly flawed, somewhat tragic, but someone that is easy to root for.
Arturo and The Wendigo, however, bring some wonderful humor to the story.

Have you listened to any of Dave Thompson’s other performances before? How does this one compare?

I've been a huge fan of Mr. Thompson's narrations through PodCastle and jumped at the opportunity to listen to a full length audiobook. I am thrilled that he has more to choose from!

As I mentioned above, I had already bought and read the print version. I laughed AND cried.

You will not be sorry buying this audiobook. Seriously.

If you enjoy strange supernatural stories, you will enjoy this one. Unlike those involving ordinary evil and dangers, this one seems realistic and funny and the plot keeps you guessing as to what will happen next. Especially liked the chapter titles such as, when everyone gets what they deserve.