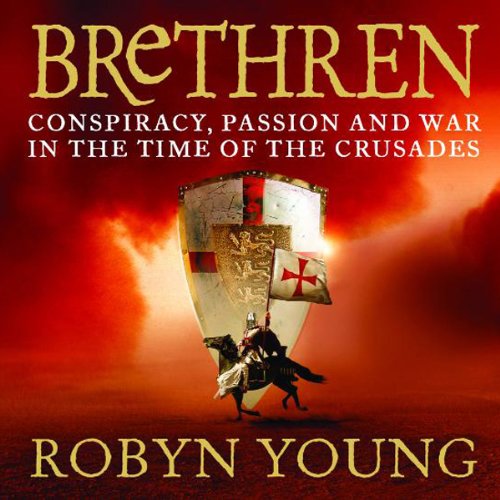 Brethren is a fabulously rich and exciting novel set on the eve of the last Crusade, at the end of the 13th century. Before young Will Campbell can take his place in the all-powerful Order of the Knights Templar, he faces a long, hard apprenticeship to the foul-tempered scholar, Everard. As he struggles to survive in the harsh discipline of the Temple, Will must try to make sense of his own tragic past, the dangerous mystery that surrounds Everard, and his confused feelings for Elwen, the strong-willed young woman whose path seems always to cross his own.

Meanwhile, a new star is rising in the East. A ruthless fighter and brilliant tactician, the former slave Baybars has become one of the greatest generals and rulers of his time. Haunted by his early life, he is driven by an unquenchable desire to free his people from the European invaders of his homeland. These two men are destined to collide, as Templar Knight and Muslim warrior, in that extraordinary clash of civilizations known in the West as the Crusades.

What listeners say about Brethren

This is not only a weak book, but by far the worst narration I have heard. I do not normally write reviews but I was so disappointed with this purchase I feel duty bound to pass on my experience so that you can avoid this audio like the plague.

There are many comments that this book is lacking however what they haven't taken into account is that this is only an abridged version so there are large chunks of the main text missing. I agree that this audio book is pretty bad. As with all abridged audiobooks this book doesn't do justice to the book. I would suggest you either wait for the unabridged version or read the book as it is wonderfully written.

This is one of the very few audiobooks that I have struggled to finish. The narration has no fluency and the narrator's characterisation is poor. The story is weak, though this may reflect the narration as much as the story itself - its difficult to tell! My recommendation - don't bother.