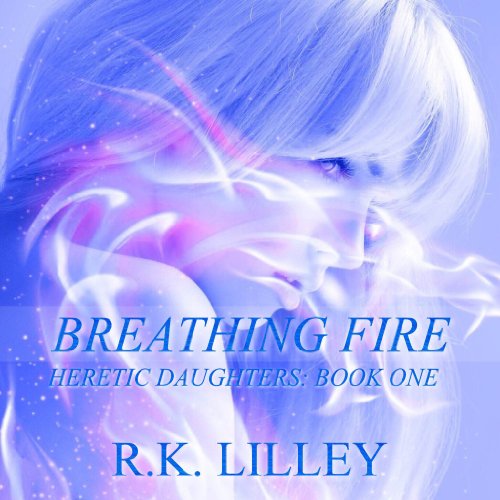 By: Rebecca K. Lilley
Narrated by: Nicole Phillips
Try for $0.00

Every head start has a price. Seven years ago, Jillian burned just about every bridge she ever had. Being a lifelong fugitive, she'd seen it as her only chance to get away clean, but it had taken its toll. In a world where those with supernatural powers must stay hidden from normal society, being a creature that even most of the supernatural community considered a myth did not make for an easy life. And when the ex she ran away from finds her again, it's about to get much harder. It doesn't help that she's still hopelessly in love with him...

What listeners say about Breathing Fire

I LOVE THIS SERIES!!!

I have been reading this fantastic book every year waiting for Crossing Fire to come out. I adore the characters it’s unique and the world building is fantastic I can’t wait to see what happens. It’s driving me crazy

I can't wait for CrossingFire!

Loved the world R.K. Lilley created! I cannot wait until CrossingFire comes out! You can't rush a beautiful thing

this was a funny and a intense read. I loved the narrator's character voices. I cant wait for next installment and I am dying to know if jillian and dom will ever reconcile and when their egg will hatch.

I Always Want A HEA

There is absolutely no HEA here. None. If you want the slightest bit of people being happy, skip this book. If you like a love/hate, rip-our-clothes-off-every-time-we-get-in-the-same-room-then-hate-each-other-for-it antagonist 'relationship', you might like it. It's "edgy", and I cant tell you how many times I wanted to throw the iPod across the room and scream in frustration. ONE GOOD CONVERSATION and they could have cleared much of the problems. Well, the current ones. There'd still be the things she did before, but at least there would be an explanation *why*, instead of the "because you're a horrible B of a person" that ends up being assumed.

Every interaction she had with Dom (the hero), she was either emotionless or witchy-with-a-B. I found myself longing to reach through the book and violently punch the heroine (who's otherwise quite likeable and badass) for being such a cowardly B that she throws everything away, constantly, because she's scared of what *could* happen. Ok, I understand. Her life is jacked up. She's got centuries of running, lying, hiding, unable to trust anyone. But besides just running from the guy she utterly and completely loves, she actively tries to burn her bridges with him. Constantly. "Burn bridges" is actually a mild description. She goes out of her way to make him hate and distrust her "to make a clean break." Only she doesnt get (even tho he's told her) that he loves her like crazy. And having her constantly hurt him makes him insane, so he hates her too. I could completely sympathize. She's also upset because she's hated by everyone around him; what she acknowledges, but doesnt seem to *get*, is everyone hates her because she's made someone who loved her beyond reason a miserable ball of pain and rage. Yeah, I can see how the other druids would have a tad bit of animosity towards her. Granted, there's one druid in particular who has it out for her, and she's "the princess" who covets the hero. But Jillian (the heroine) wont actually tell anyone how Siobhan (the "princess") torments her. So they usually see what looks like Siobhan mouthing off, and Jillian beating the crap out of her. Know what that makes Jillian look like? A horrible mean jealous bully who cant control (and doesnt even try) her temper. Again. I can sympathize with their dislike. If the reader wasnt privy to Jillian's thoughts and feelings as she's showing the world this cold, emotionless face, we'd probably dislike her too.

Finally, the book ends with one heck of a cliffhanger, and almost nothing resolved. She has a tiny part of a conversation with Dom where she explains a little bit of why she did what she did (and GOSH! It helps!) but not enough to fix anything. It seems like he doesnt actively hate her anymore, but he's still exhausted with her issues. I feel ya, dude.

Honestly, as cool of a book it was (in everything but Jullian's behavior/attitude), I really wish I would have skipped it. If I would have read a review like the one I wrote, I wouldnt have bought it. It was such an exercise in frustration that I feel like going and reading some retardedly simple romance novel. A Julie Garwood or something, where the hero & heroine dont spend the entire book fighting, but instead form a team and fight their enemy together. And live happily ever after, damnit!

Whew. Rant over. Remember, I liked the book :) I just hated the heroine. If she would have been half a normal person who knew how to communicate, I would have given it 5 stars and reread it forever.

A Fabulous beginning to an Engaging new series !!

I don't read many books about dragon shifters but I could not put this book down. I was hooked from the first few pages and Jillian was such a snarky kick ass woman who was hiding a deep dark secret. Not only was she and her sister Lynne from a family of ancient dragons, they were both on the run. They befriended a motley crew of paranormals and I just adored Caleb who loved to blow stuff up, had an affinity with guns and he seemed to be everywhere which was great in a crisis. Then there was Christian, how ironic considering he was a dragon slayer yet completely unaware that his best friend and her sister were his arch enemies, talk about keeping your friends close and your enemies closer. As for Dom, well Mr brooding Alpha. He sounded awesome to me but Jillian had her reasons to do what she done. Jillian decided not to bow out gracefully and burnt all of her bridges behind her. She made sure the relationship crashed and burned in a spectacular manner and I kind of felt sorry for her as her heart was in the right place, it was for the right reasons but it was just the way she went about it. Despite the fact they couldn't keep their hands off each other when they crossed paths, I can't see a "happily ever after" in their future but never say never...

When her past finally catches up to her, Jillian will make a choice that will change her world forever. New alliances will be formed with old foes returning and she will have to take a stand. Heaps of action and plenty of twists to this tale. This series is now one of my new favorites, I just hope the author writes the second book soon as I am dying to know what happens next...

Audible Review: Nicole Phillips did a fantastic job as narrator. My biggest compliant in audible books is when a female impersonates a male voice. I had no issues with Nicole's male voice or any of the other characters she impersonated. Listening to this book was just as entertaining as when I originally read it two years ago.

Story Review: Holy Cow Batman! This book was out of this world! I loved it the first time I read it and I loved it the second time I listened to the audible. It had everything I could want in a shifter book. The action was so entertaining and the side characters were just as fascinating as the main characters.

Jillian and her sister have been in hiding for years from her clan. They are dragon shifters and the males have gone insane. Jillian and Lynn are considered the last known breeders. During their time of hiding out, Jillian met and fell in love with a Druid.

The Druid's are not accepting of other races and have always conspired to come between Jillian and Dom, who is expected to become Arch. On top of that, the current Arch is threatened by Dom and will do anything necessary to take him out. Jillian knew she had to do something drastic or the current Arch would have him killed.

Jillian is pretty much everything I love in a strong heroine. She's practically indestructible and she doesn't put up with anyone's crap. She is one of my favorite heroines! The only thing I didn't like about this book and left me very conflicted was Dom. He is everything I love in a Hero. Dominant, dangerous and possessive. Even though he thinks Jillian betrays him, he never gives up his search for her. His people want her dead and he has demanded that no one hurt her.

Here's what has me so conflicted. Yes, he loves her and he's obsessed with her but he was so blind to what his people were doing to her when they were together. And then when Jillian &quot;betrays&quot; him, he turns so cold. He sleeps with a different women every night just to get back at her and he never really warms back up. I'm hoping the second book will see these two back together and Dom will start protecting Jillian better...even though she truly can protect herself.

The concept for this book was intriguing. Unfortunately the poor narration, underdeveloped characters, and weak language contributed to many frustrating moments and confusing transitions.

The narrator mispronounced a lot of pretty common words, demonstrated odd prosidy within her sentences (putting emphasis on the wrong elements per the syntactic construction that would make sense), and just didn't seem that invested in the story.

The sentence formulation was sometimes awkward and the vocabulary repetitive (e.g., "self examine myself"). I had a hard time caring about what happened to the characters and felt like chunks of the story and some transitions were just missing.

Sounds depressed to be reading the book

Christians who hate witches but believe in dragons

The reader was emotionless. Just reading words with no emotion

This author sure has it out for witches too strongly

brilliant book just such a shame it doesn't carry on. please write the following book.

Perhaps a different editor may have been able to tighten up the dialogue and prevent some of the inconsistencies in the characters and plots.

The narrator was certainly not the worst I have come across. Perhaps, the old saying that you can't make a silk purse out of a pig's ear holds true as far as the dialogue is concerned.

Well, this was a strange little book. Full of contradictions and periods of really awful writing. But, although there were peaks and troughs, fortunately the peaks were more numerous than the troughs. It is a story that captured me although the characters were unoriginal and some of the dialogue and inner thoughts were dire. Oh - and the ending was a bit, well, cheesy is the only word that comes to me at the moment. Definitely worth a try though.