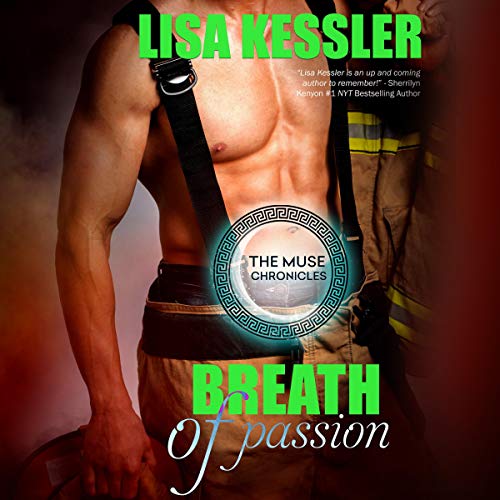 By: Lisa Kessler
Narrated by: Gwendolyn Druyor
Try for $0.00

Erica Sterling owns her curves and inspires passion in every person she meets. It's the curse of having the Greek muse Erato lurking in her soul. After a hot night with a firefighter, she struggles to keep her distance from him. The gods have other plans.

No one understands fire and heat like firefighter Reed McIntosh. After meeting Erica, a new ability is awakened inside of him, along with the desire to keep her safe. The gods have marked him, and fate has chosen him to be her protector.

When a stalker's threats turn up the heat, Reed will put his life - and his heart - on the line. But when the ashes settle, will love be too late?

The Prophecy: Every generation, the nine daughters of Zeus are reborn, and with their rebirth are also nine Guardians. They will be marked by the gods and given gifts to protect his treasure. Their abilities will only be unlocked when they find their muse.

"Another beautiful series from an unbelievable author. She gets me every time." (Number one New York Times best-selling author Sherrilyn Kenyon)

What listeners say about Breath of Passion

Best yet in series

Erica and Reed star in this 3rd book which builds again onto this strong series. We continue to know and enjoy all the characters, both Muses and Guardians, and even the "bad guys." The theme may be the same, but each book improves and revels the layers of personalities, and adds action. Death is not a stranger in the dark moments as our protagonists push to the future. I'm looking forward to continuing the series as it plays out.

Best one yet! I really liked Erica and Reed. By far my favorite...so far. Warning though, there is a part that will bring you close to if not full blown tears and I'm still trying to wrap my head around it.

Narrator gave a quality performance. I'm still not loving her male voice, but still enjoy the listening experience. She did a good job.

Love Lisa Kessler's writing, and I love this series! This installment of The Muse Chronicles is definitely a hot one! I'd suggest reading the first 2 books in the series first, but each book is about a different muse, so it isn't completely necessary, but there are characters from the previous books, and there is a continuing storyline throughout the series, so read those first! They are awesome too, so no hardship there! In Breath of Passion, Erica's muse brings on passion in others, and Erica has had a bad experience with this, so she tries to keep her relationships only on the surface, but when sexy, hot fireman, Reed, comes into her life, their chemistry is off the charts! I love the suspense of the evil group trying to get rid of the muses, and I love getting glimpses of the past muses. I do think the muses need to take a more active role in protecting themselves, they all feel rather blasé about the whole thing, and it's getting a bit frustrating that they aren't being more pro-active. I love the whole muse plotline, and the romance was wonderful. I love when characters try to stay away from each other, but they just can't keep their hands off of each other! It makes for some intense, passionate scenes! Definitely enjoyed this book, and am definitely looking forward to the next!