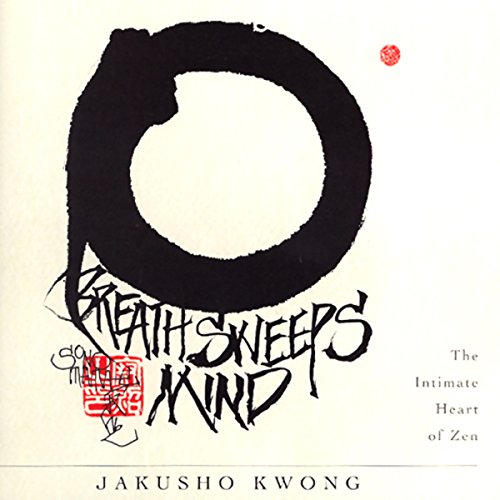 From a Dharma successor to the late Shunryu Suzuki-roshi comes Breath Sweeps Mind, an invitation to experience the living presence of a true Zen master. With more than 40 years of experience practicing traditional Zen, Jakusho Kwong-roshi removes some of the mystery surrounding this enigmatic philosophy. Here is clear instruction in its core principles and how it relates to our everyday world, including methods of zazen meditation, why delusion is inseparable from enlightenment, turning our light inward, and more.

Breath Sweeps Mind presents a refreshing and easily accessible transmission of Zen practice to help us return to our own profundity ¿ which is always with us ¿ and realize the richness of this very moment.

This is a slow moving dharma talk with lots of space to experience the void between words. I found myself soaking it in. There is a lot of wisdom within. It isn't like a lots of recent Buddhist marketed self help type audios that are sort of a hyped sales pitch for whatever method is new. It's like an old school teacher talking to his students. I found it very refreshing and I learned a lot. Felt like a zen retreat.

Was one of the first times listening to an audiobook where, once I put it down, I felt perfect, at ease, calm, and held a kind of internal peace that I've never really experienced before. And I'm no stranger to inner peace and calm. I'm a life coach, and it's what I do. But with that I'm incredibly picky when it comes to information, especially integrating new information. ...this book, .. is perfect.

I highly recommend this to anyone interested in the subjects of peacefulness and release. I'm grateful that I found this book. Jakusho Kwong-Roshi thoughtfully speaks on the subject with ease and clarity, and with such a way that you identify with him and his words effortlessly.

Pretty cool feeling after listening to an audiobook on a subject that I'm no stranger of.
Nice work. ...very nice work.

this is a terrific book. Genuine and full of good teaching. The talks are clear and wise. If you have an interest in Zen or in life...this is a must listen. Enjoy!

Jakusho Kwong-roshi brings humor, compassion and clear explanations to some Zen concepts that had previously evaded me. I listen to certain sections over and over, it's like peeling an onion - the layers fall away to reveal a new more fascinating layer and a deeper understanding.
One of the treasures in my library, now and for many lifetimes to come!

This is a wonderful examination of Zen and person by a master. Jakusho Kwong-roshi is funny, poingnant, insightful and authentic. His stories bring to life some of the rather esoteric aspects of Zen. His voice is soothing, his message profound.

He quotes a poem from Tozan:

Excellent ebook. Many thanks Jakusho Kwong-roshi

Would you consider the audio edition of Breath Sweeps Mind to be better than the print version?

I will definitely buy the book and add it to my collection.

Important but not concise

Felt this one was a bit stale... I found it bland in its message and delivery. Maybe this is because I listened to it right after 'You're It' by Alan Watts (life changer) and my expectations had to been set to high in comparison. Either way, I would recommend purchasing 'You're It' before giving this one a go.

You're better off finding a podcast about Buddhism

This is basically a recording of a guy giving a lecture about maintaining positive thinking. Which I don't have a problem with, but it reminded me of a basic podcast (which are free btw) I can't say I gained anything from this but maybe it just wasn't my style either. I stopped it within listening to a few chapters and regretted spending my Audible credit on what could easily be put into a podcast category.

Common sense Zen for the soul.

Great, plain-spoken American English talk on being yourself with lots of great Zen stories on sutra commentaries.

presence of awareness. in the oneness this uncovers this which is.
..

Jakusho Kwong Will Sweep You Away

If you have read Eckhardt Tolle or Deepak Chopra, if you are seeking a more fulfilled and peaceful existence, if you have an interest in the spiritual then this is for you. Jakusho Kwong is a long-practising Zen monk with a large following worldwide.

I have listened to this audiobook twice already and it's my first choice when I have a long drive or stressful work situation forthcoming. It has helped me learn to focus on one thing at a time, to meditate and to remember to breathe!

Jakusho Kwong has such a big heart. In one of his stories he chances upon a dying man, and retells the experience so vividly that it made me cry. Beautiful.

He really does possess the Power of Now!

As the other reviewer has already stated, this is a beautiful book, narrated beautifully by Jakusho Kwong-roshi, but . . . .spoiled totally by the publishers, who have decided to use the two minutes 'silence' at the end of each section, as indicated by the traditional ringing of three bells, to tell you what you are listening to, and who the publishers are, not once, but twice, by a loud american female, interspersed with the playing of loud, pseudo oriental sounding panpipes, leaving no time for thought unless you actually pause or stop the CD.

This harsh treatment at the end of every section of what is a peaceful, thoughtful and tranquil book was so disappointing, and somewhat jarring on the nerves. I'm sure if Jakusho Kwong-roshi were to listen to what the publishers have done throughout this recording of his talks, he would be mortified.

The ringing of three bells at the start of each section, and two bells at the end, is explained by Jakusho at the beginning of the audiobook, so it is expected and anticipated. This two minutes 'silence' is supposed to be used for quiet reflection on the beautiful words that have been spoken, and would have complimented the book perfectly, given that is based on Zen thoughts and ideals.

I would have given it one star purely because the publishers spoiled my enjoyment, but that would be at the expense of such a beautiful, thought provoking book, by a wonderful teacher.

If you can cope with fast forwarding at the end of the sections, whilst getting lost in thought, then don't let my review put you off. This audiobook really is a must.

What did you like most about Breath Sweeps Mind?

What other book might you compare Breath Sweeps Mind to, and why?

I don't know of any other book like this

Have you listened to any of the narrator’s other performances? How does this one compare?

I've never heard this narrator before.

It's a very calming thing to listen to. Quite encouraging if you're feeling down.

If you feel the world is falling away beneath you this would be a good listen.

Jakusho Kwong is amazing to listen to, with some really interesting stories and explanations of practice's, would highly recommend!

If this was only title I had ever received from Audible it would have worth it. The teachings are simply delivered and relevant to life.I found Breath Sweeps Mind inspiring.

Boring, I couldn't convince myself to hear more

Very different approach to try to inform someone.
I was pushing myself to hear more but I could manage.