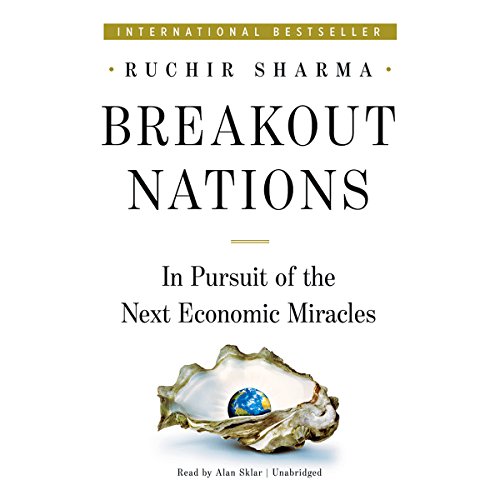 By: Ruchir Sharma
Narrated by: Alan Sklar
Try for $0.00

After a decade of rapid growth, the world’s most celebrated emerging markets are poised to slow down. Which countries will rise to challenge them?

To identify the economic stars of the future, we should abandon the habit of extrapolating from the recent past and lumping wildly diverse countries together. We need to remember that sustained economic success is a rare phenomenon.

As an era of easy money and easy growth comes to a close, China in particular will cool down. Other major players including Brazil, Russia, and India face their own daunting challenges and inflated expectations. The new “breakout nations” will probably spring from the margins, even from the shadows. Ruchir Sharma, the head of Morgan Stanley’s emerging markets division, here identifies which are most likely to leap ahead and why.

After two decades spent traveling the globe tracking the progress of developing countries, Sharma has produced a book full of surprises: why overpriced cocktails in Rio are a sign of revival in Detroit; how the threat of the “population bomb” came to be seen as a competitive advantage; how an industrial revolution in Asia is redefining what manufacturing can do for a modern economy; and how the coming shakeout in the big emerging markets could shift the spotlight back to the West, especially American technology and German manufacturing.

What emerges is a clear picture of the shifting balance of global economic power and how it plays out for emerging nations and for the West. In a captivating exploration studded with vignettes, Sharma reveals his rules on how to spot economic success stories. Breakout Nations is a rollicking education for anyone looking to understand where the future will happen.

Ruchir Sharma is the head of emerging markets at Morgan Stanley and a longtime columnist for Newsweek, the Wall Street Journal, and the Economic Times of India. He lives in New York City.

“[A] country-by-country tour de force of what makes emerging markets tick. He is an excellent writer with a keen eye for detail and a lyrical prose sense…As with Michael Lewis’ Boomerang on the European crisis, for sheer readability and insight on the various parts of the ongoing emerging drama, I daresay you won’t find a better choice.” ( Wall Street Journal)
“A primer to guide us…This is a great road map to the new and better-balanced world in which we will all live and an encouraging one.” ( Independent, London)
“In Breakout Nations, he takes us on a fascinating gallop through the countries at the edges of the developed world. Not only does he challenge the accepted wisdom—that China and India will motor on, ad infinitum—but he comes up with some surprising candidates for the next decade’s economic stars.”—( Sunday Times, London)

What listeners say about Breakout Nations

After listening to this book, I feel that I understand the developing world much better. I totally agree with everything the author said about my home country -- Russia. This makes me think that what he says about other countries is also quite true. The author carefully examines each country and provides a lot of facts, which he thinks are important in making investment decisions in these countries. If I am to talk about Russia, I would probably use the same facts as he provided in the book.

As the head of Emerging Market Equity at Morgan Stanley Investment Management, the author knows emerging market well. With many practical discussions supplemented by his experience on the ground, he listed the nations that could have the best chance to break out the boom then crash or stagnant pattern experienced by most emerging nations and eventually make to the league of developed countries. Five start book.

A romp of the economies of a decade past. Today it is just an example of how hard, or misguided, we are in predicting the future.

A must read for investors

Very good analysis. Some of the facts presented are little dated (there have been changes in government in several of the nations he profiles) but the basics he covers remain true.

So boring I don't think I can finish it

What would have made Breakout Nations better?

If he got to the point. He drags on about all these details on each country, but really the reader just wants to an overall conclusion on what he thinks each countries economic potential is. He goes on for so long that you really don't know what he actually thinks about the country. It is not too much help unless you pay extremely close attention to everything he is saying.

Would you be willing to try another one of Alan Sklar’s performances?