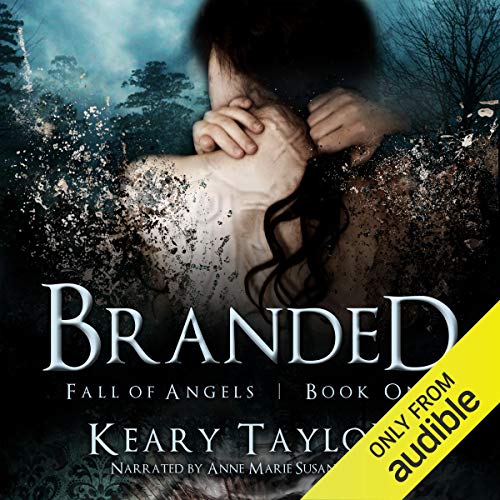 Jessica's had the nightmares for as long as she can remember. Nightmares of being judged for people who have died, of being branded by the angels. Her friends and family think she's crazy because of it all. Yet she carries the mark of the condemned, seared into the back of her neck, and hides it and herself away from the world.

But when two men she can't ignore enter her life, everything changes, including the nightmares. The two of them couldn't be more different. She will do anything to be with one of them. Even tell him the truth about angels, why she never sleeps, and the scar on the back of her neck. But one of the two has set events into motion that will pull her toward her own judgment and turn her into the object of her greatest fear.

What listeners say about Branded

The Nightmare From Judgement Day

I loved ....I loved... loved this set of books and only hope Keary Taylor continues to write this Saga.
It's somewhat put me on the mind frame of Twilight Fiction Fan, however with Angels & Demons instead of Vampires.
Jessica is so my type of normal chick with kra-kra troubles .. who ends up meeting the hot sexy buff rich guy, Alex while the hottest Baddest ACE Angel in Hell is chancing after her affections?
This is an awesome must listen to Audible.com favorite ...I first came across this book on my kindle on Amazon and wanted so badly to hear it narrated ....well, I must say...Great Job Anne Silvey....smoothly done 4star performance.... luved ....luved ..luved you! The villain in the story Cole even makes you wana fan yourself ....way to go Keary! keep writing ...I'll keep reading....

Love this perspective on Angels...

This is an amazing story, very detailed, keeps you interested. narrator was great, showing emotion, truly giving the best to make sure you felt what the Characters felt.

What would you do if you nightmares were real?

Jessica is a young woman who keeps a wary distance from most people. Whenever she falls asleep she is judged by condemned and exalted angels for the lives others have led. Whether she goes up or down there is always pain. Anyone she has ever told including her parents assured her they are only dreams but Jessica knows the truth.

While bits of the story seem repetitive in the beginning stay with it. Silvey is a great narrator and I am looking into her other performances.

I felt the speaker was trying too hard to pronounce each word to the full degree - so much so, that it was distracting to listen to the story at times because I could only keep hearing the emphasis on slowly saying each word. It didn't seem like it was being read naturally - as if the main character was telling us the story. Also, I felt some of what was said should have been said in the way it was meant. A whisper should have been whispered or at least said much quieter. Still okay. But. Not the best.

Unique YA story about angels

Would you try another book from Keary Taylor and/or Anne Marie Susan Silvey?

Yes - I liked this story. It was a little slow but the story was unique, thought provoking and definitely provided an escape from reality.

What about Anne Marie Susan Silvey’s performance did you like?

The narrator did a fair job with the various characters voices which helped in distinguishing which character was speaking.

Was Branded worth the listening time?

Yes and No. It was a little slow at times but other times I was engaged in what was happening. I had an overwhelming need to know what happened, so I sped up the narration to help get through the slower parts of the story more quickly. It seemed to help.

Worth a try! The narrator did a great job. she read with such emotion. In contrast, the story was slow. It did have a nice end, but it drug on too long. There was too much description (never thought I would say something like that) and too much long winded monologues. It had such great potential. However, the story line was an original one and that is why I continued and why I encourage you to give it a try, if not for the sheer originality of it all.

**REVIEW FOR THE ENTIRE SERIES ** SOME SPOILERS.

Narrator did a good job in her performances of all character's and giving them their own voices. My only complaint is her incessantly sighing throughout the entire series.


Didn’t enjoy this nowhere near as much as the House of Royals series, which is why I ventured into more from Ms. Taylor as I devoured that series in a matter of a week, all 3 of the intertwining series within.

Quite a few flaws with this one. SO much angst. Insta love. Immature. etc. It's been only 4 mos and mentions of Alex's non aging comes up more than I could kept count of. At 23yrs old, why would this even be mentioned ??

Cole's storyline just didn't make sense to me in the end.

I couldn't like Jessica after her constant berating of Alex for not proposing to her.

This was altogether much too YA (clean) for me. I find it very difficult to buy into any 20yr old heroine or 23 yr old hero, to have enough life experience/maturity to behave the way these two do, well, Jessica acted her age in her ridiculous behaviors.  I wouldn't recommend it.

Narrator as adult-good. Narrator as a child voice-painful. Will try to get through the next book.

Ok, let's start with the good.
the premise is good. it's so unique and out of the box that I love it. It was the only thing that kept me going. Although the story was loooooooooooooooooong I had to know what was gonna happen in the end. The fact that I couldn't predict the ending is another kudos to the author. (I mean as far as the surprise twist with what's his face)
Then there's the main character...is she really 20? because ALL her actions and desicions seem to contradict her age. it's so annoying and unrealistic . Especially because she's a runaway. Runaways have to grow up faster and be more mature than everyone else simplest because in their situation they can't afford to be naive. This chick...man.
and I'm gonna need the author to look up a synonym for erupted. coz every chapter something is erupting outta this girls chest.
lastly, the reader. oh. my. gosh. She was bad. That sometimey accent she put on cole....Lawd! and I could have done without the crying. just read! leave something to the imagination.
maybe one day I'll get around to the sequel. but sheeesh. I need a little break before that.

So Glad I Gave This a Chance

This was the first paranormal romance I've read, and I have not been disappointed. I've been a fan of Urban Fantasy for years, and when I was this was on offer and the audiobook so cheap, I decided to give it a chance. The narration is fantastic, in just the style I enjoy. The story itself, though predictable to some extent, was an enjoyable ride. Other than a little bit of a pacing problem in the 1st 1/3 (I just think it would have been good to have all plot lines begin at roughly the same time), the book was well written.

probably one of the most boring books I can never read the whole thing tho I have tried just tales way to long to get to anything good which i am yet to see. spends 9 chapters with her going round in circles gushing over a boy fml