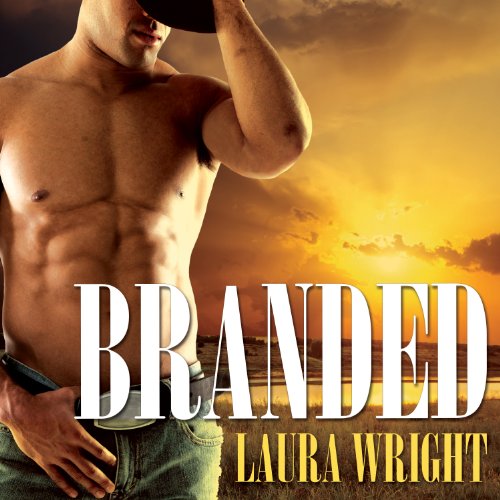 When the Cavanaugh brothers return home for their father's funeral, they discover unexpected evidence of the old man's surprising double life - a son named Blue, who wants the Triple C Ranch as much as they do. The eldest son, Deacon, a wealthy businessman who couldn't wait to leave the ranch and move on with his life, is looking to use his powerful connections to stop Blue at any cost. He never expected the ranch's forewoman, Mackenzie Byrd, to get in his way. Mac knows Deacon means to destroy the ranch and therefore destroy her livelihood. But as the two battle for control, their attraction builds. Now Deacon is faced with the choice of a lifetime: Take down the Triple C to feed his need for revenge, or embrace the love of the one person who has broken down every barrier to his heart.

"Saddle up for a sexy, intensely emotional ride with cowboys that put the wild in wild west. Laura Wright never disappoints!" ---Alexandra Ivy, author of Hunt the Darkness

Really liked this one, looking forward to the next

Would you consider the audio edition of Branded to be better than the print version?

Since I didn't read the print version, I guess I can't really answer. However I use audio because I don't have time to sit down with the print, and I can listen while doing other things. That being said I really enjoyed the audio version.

What was one of the most memorable moments of Branded?

I think answering this question in any detail would be a bit of a spoiler, so I will just say, I think I could actually feel Mac's trepidation of the intrusion during the pool scene.

Which character – as performed by Kaleo Griffith – was your favorite?

I love a bit of mystery with my romance, and I found this one intriguing. I am looking forward to the rest of this series. The only complaint I have (and it is just a small annoyance) is that the scene changes happened so quickly that I felt like they were spliced together.

The story is good and well written with very likeable characters however, it ends with a cliffhanger. I have listened to the second book in the series too and it also leaves you hanging! The third and fourth books are not on audible and on kindle they are around $7.99 for only about 300+ pages. Had I known I wouldn't have started the series. Based on what I've listened to so far I'm sure it continues to be a good story but not worth the expense to me.

What was one of the most memorable moments of Branded?

Have you listened to any of Kaleo Griffith’s other performances before? How does this one compare?

No but I enjoyed his narration and will definitely look for him in other books!

Good premise for a story but fell a little short

While I enjoyed the story and was reasonably entertained, it seemed a bit rushed and undeveloped. The relationship between Mac and Deacon happened very quickly and went from cool to over-the-top lust almost immediately.

The narrator isn't horrible, but he has a hard time making the females sound credible.

Also, I get that a lot of authors feel a need to add explicit sex to their work and I'm not especially bothered by it - but in this case it was overdone and repetitive. Most of it did not add anything to the story and it got boring.

All of this being said - I liked the main characters as well as the secondary and will more than likely pick up the 2nd book in the series.

Loved the story. The narrator, Kaleo Griffith, earns ten stars for the great voices. Yumm, I could listen to his performance of Deacon all day and all night.

This book was alright. Not my favorite, but I will continue the series to see what happens.

Deacon is a handsome, confident, sexy but bitter Billionaire hell bent on revenge and destruction so after his Father's funeral he enlists the help and co-operation of his two other successful brothers to put and end to a bitter chapter in their lives by destroying his Father's legacy... the Triple C Ranch. But he wasn't counting on Mac, the beautiful, strong and dedicated Foreman of his Father Ranch and, although they're fighting on opposite sides, their sexual chemistry, sizzling attraction, quick dialogue, jabs and dirty talk makes it a tense bitter-sweet fight as both are prepared to fight dirty.... despite their mutual lust.

As Laura Wright skilfully created and richly describes a tantalising world and blended a past tragic unresolved murder along with emotional tension, secrets, betrayal, conflicts, angst, passion, likeable complex secondary characters each with their own demons, mystery and revelations. All that and a fiery, hot and passionate romance which results in the lines between love/hate and revenge/forgiveness to slowly become blurred. It's told from various POVs which enriches the story and deliciously sets the outlines for future books.... and new clues means there's hopefully a killer to catch too.

Worth a credit? He started off as a cold-hearted bully but Deacon's character growth, revelations, quick wit and his passionate personality had me quickly falling for all his macho charms and that, coupled with the hot romance and all the sub plots and mystery makes this not only a definite creditworthy listen but also a good series to follow.

5 of 10 people found this review helpful

Thoroughly engrossed with the story, the characters & the mystery behind the murder of Cass. Left with somewhat of a cliffhanger, can not wait for the next one.

Okay a lot cheesy but the story was good, didn't really care for the narrator, maybe a different narrator would've been better.