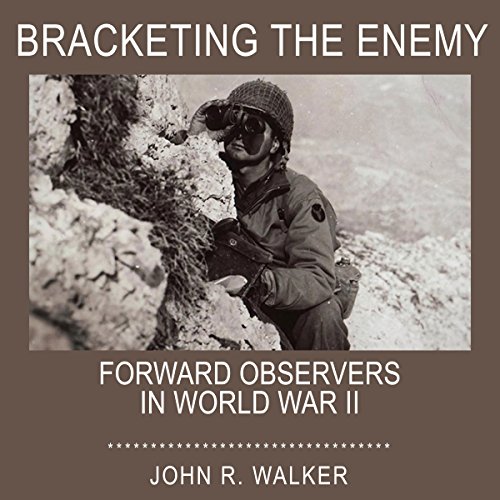 After the end of World War II, General George Patton declared that artillery had won the war. Yet howitzers did not achieve victory on their own. Crucial to the success of these big guns were forward observers, artillerymen on the front lines who directed the artillery fire. In Bracketing the Enemy, John R. Walker offers the first full-length history of forward observer teams during World War II. As early as the US Civil War, artillery fire could reach as far as two miles, but without an "FO" (forward observer) to report where the first shot had landed in relation to the target, and to direct subsequent fire by outlining or "bracketing" the targeted range, many of the advantages of longer-range fire were wasted. During World War II, FOs accompanied infantrymen on the front lines. Now, for the first time, gun crews could bring deadly accurate fire on enemy positions immediately as advancing riflemen encountered these enemy strongpoints. According to Walker, this transition from direct to indirect fire was one of the most important innovations to have occurred in ground combat in centuries.

Using the 37th Division in the Pacific Theater and the 87th in Europe as case studies, Walker presents a vivid picture of the dangers involved in FO duty and shows how vitally important forward observers were to the success of ground operations in a variety of scenarios.

"A must read for specialists, and of equal value to any person wishing to better understand the evolution of forward observers from concept to practice." ( On Point)

What listeners say about Bracketing the Enemy: Forward Observers in World War II

I’m absolutely thrilled to have found a book dedicated to the Forward Observer (FO). For 16 years, I have served in this field as a Marine and as a Soldier, including tours in South Korea, Iraq, and Afghanistan. I’ve served at levels from platoon to Division.

This book does an excellent job at detailing the evolution of our profession. We often refer to ourselves as the ‘red headed step children’ of the infantry, and it seems our work is often overlooked.

This book is well-worth the listen. A modern FO might be disappointed. It’s apparent the author and/or narrator didn’t consult a current FO. My fellow Artillerists, you must forgive. It is worth the gratification that we now have a book dedicated to the efforts our FO brethren performed in the past. I’m hopeful more will follow.