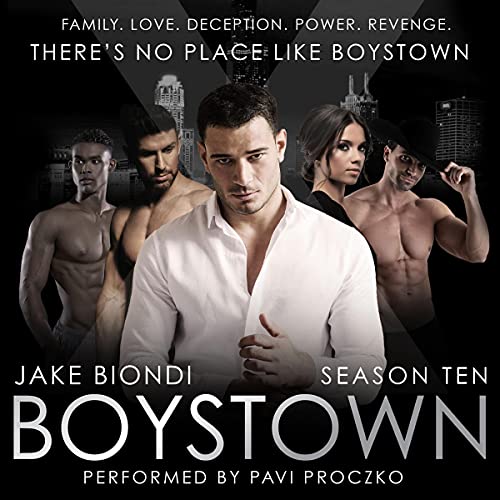 By: Jake Biondi
Narrated by: Pavi Proczko
Try for $0.00

The epic 10th installment of the Boystown series is like no other that has come before it. Two timelines in one book, Boystown, Season Ten not only propels the thrilling action forward, but also reveals the events of the 25-year jump that occurred at the end of Season Nine.

At the wedding of the year, the parents of Hope Ciancio and Joseph Mancini prepare to watch their children get married, unaware that an uninvited guest will forever change the course of their lives. A sexy cowboy arrives to claim what belongs to him, unaware of his own ties to the Ciancio and Mancini families. His presence quickly sparks a fire that reignites the Ciancio-Mancini feud.

In the meantime, Cole and Victor DelVecchio’s marriage is put to the test not only when Derek Mancini returns to Chicago very much alive, but also when a hot young model unleashes a twisted plan to get Cole for himself. As Emmett Mancini and Keith Colgan expand their own empire, one of their restaurants becomes the scene of a shocking death that devastates their circle of friends. And an international scheme puts many of Boystown’s residents in danger.

It all leads up to a birthday celebration that leaves many of its guests on the brink of life and death.