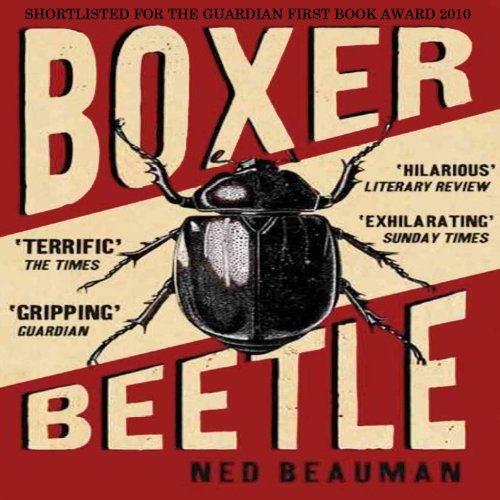 By: Ned Beauman
Narrated by: Robert Sams
Try for $0.00

Kevin "Fishy" Broom has his nickname for a reason - a rare genetic condition that makes his sweat and other bodily excretions smell markedly like rotting fish. Consequently, he rarely ventures out of the London apartment where he deals online in Nazi memorabilia. But when Fishy stumbles upon a crime scene, he finds himself on the long-cold trail of a pair of small-time players in interwar British history. First, there's Philip Erskine, a fascist gentleman entomologist who dreams of breeding an indomitable beetle as tribute to Reich Chancellor Hitler's glory, all the while aspiring to arguably more sinister projects in human eugenics. And then there's Seth "Sinner" Roach, a homosexual Jewish boxer, nine-toed, runtish, brutish - but perfect in his way - who becomes an object of obsession for Erskine, professionally and most decidedly otherwise. What became of the boxer? What became of the beetle? And what will become of anyone who dares to unearth the answers?

First-time novelist Ned Beauman spins out a dazzling narrative across decades and continents, weaving his manic fiction through the back alleys of history. Boxer, Beetle is a remarkably assured, wildly enjoyable debut.

What listeners say about Boxer, Beetle

Robert Sams reads this book sounding almost like a computer-generated voice--with little variation of tone and clearly NO idea what he's saying. Since I'm whispersyncing with a Kindle copy, I can tell you that this novel is filled with hilarious characters and biting social commentary, but he misses the point entirely! I had to stop sometimes and think through the words to get the joke or even just to get the meaning. Sams has no interest in this book and should really be replaced with a reader who will deign to make it comprehensible. BOO!

The characters are almost all British--why didn't they get an English actor to read it?

Where does Boxer, Beetle rank among all the audiobooks you’ve listened to so far?

about the middle. I prefer really long books and this is fairly short

What was one of the most memorable moments of Boxer, Beetle?

Which character – as performed by Robert Sams – was your favorite?

Who was the most memorable character of Boxer, Beetle and why?

the boxer. a sociopath with a penchant for directness. he cuts to the chase

an odd book for a Austin fan, but it was engaging