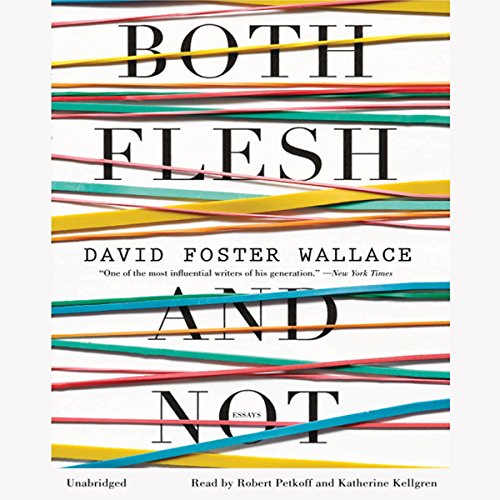 Both Flesh and Not

Beloved for his epic agony, brilliantly discerning eye, and hilarious and constantly self-questioning tone, David Foster Wallace was heralded by both critics and fans as the voice of a generation. Both Flesh and Not gathers 15 essays never published in book form, including "Federer Both Flesh and Not", considered by many to be his nonfiction masterpiece; "The (As it Were) Seminal Importance of Terminator 2", which deftly dissects James Cameron's blockbuster; and "Fictional Futures and the Conspicuously Young", an examination of television's effect on a new generation of writers.

A sweeping, exhilarating collection of the author's most emotionally immediate work, Both Flesh and Not spans almost 20 years of Wallace's career and reminds us why A.O. Scott called him "The Best Mind of His Generation" (The New York Times).

What listeners say about Both Flesh and Not

This is the first posthumous collection of David Foster Wallace's nonfiction work. It is hard to say whether or not the pieces here are of any value to non-fans of Wallace, but as someone who thoroughly enjoys both his fiction and non-fiction alike, this is a collection most definitely worth the read. The collected pieces were all previously published elsewhere, so there is nothing here that has never been seen before.

The titular piece on Federer is a great one and has been referred to by many as a masterpiece. Tennis has always been a major writing point of Wallace's with the subject featuring prominently in Infinite Jest as well as pieces focusing on the sport in "Derivative Sport in Tornado Alley" in the Supposedly Fun Thing... collection and a review of Tracy Austin's autobiography in Consider the Lobster. As a gifted writer, powerful observer and tennis aficionado (he tinkered around in the junior rankings as a teenager), Wallace make's the sport of tennis, oft not considered a major one in here in the U.S., come to life; adding beauty and grace in a manner that transfers his enthusiasm and understanding to his audience with ease.

Fictive futures may very well seem dated at first glance as it discusses authors and a sense of things from the point of view of 1987 when it was written, but carries with many universal and still true points. Wallace discusses creative writing programs, teachers, students, the role of pop culture and the roll of how said culture and entertainment is delivered. He discusses film and television and fitting true to his nature, poses insightful questions and perceptions about where the culture is and where it is going in various respects made all the more interesting by the fact that it is now a quarter century later and we now have the benefit of hindsight and comparison.

Without doing a piece by piece review, I will simply say that this is a very approachable collection with familiar and understandable topics. I will not say that is collection is easy however, as the thing I enjoy most about Wallace's subjects and style is the challenge of his writing and the topics he writes about. They are often things I would not investigate on my own, but items none the less that are much appreciated and enjoyed through David Foster Wallace's looking glass.
Highly Recommended!!

Both Perfect and Not

I loved and appreciated this book more than the four stars might suggest. I loved the way it was formated. I loved revisiting essays I had read previously in New York TImes, Salon, the Atlantic, BAE 2007. I loved the ability to again be surprised by DFW's wit, charm, inteligence, and in the last couple essays anger. Having recently lost a loved one in a rather dramatic fashion, I was also taken back those ordurous emotions I felt on September 12/13, 2008 when I heard that DFW killed himself. In the middle of this enormous banking/economic collapse, losing DFW (to others) might have seemed small. But almost 4.5 years later my 401(k) has recovered but I have yet to get over DFW killing himself. A tad dramatic? I'm sure. Anyway, back to my review of Both Flesh and Not. Part of what I loved about this series of essays was how the publisher used his definitions and usage notes as paragraph breaks. It was brilliant and insightful and actually VERY intimate.

Both Robert Petkoff and Katherine Kellgren^1 did a fantastic job with narration.

1. It does make me wonder how Katherine will put this on her resume. Does she say she was a narrator for Both Flesh and Not or a footnote narrator? Anyway, the narration worked well and showed how Hachette could have addressed the narration debacle that was Infinite Jest.

Too bad it's padded

David Foster Wallace is my favorite writer. But in this recording, the producers decided to pad it with vocabulary. This is done by having the female narrator read words that were in Wallace's notebook, along with their definitions from the dictionary (not ever Wallace's own definitions). And these vocabulary sections precede each actual essay by Wallace, so there is no easy way to skip them. And finally, the voice of the female reader is annoying in the extreme--completely unlike the voice of Wallace himself, which you can hear (and I strongly recommend that you hear) in his collection "Consider the Lobster." What a shame that the producers felt this padding was necessary.

Would you listen to Both Flesh and Not again? Why?

They pad out this book with some pedestrian definitions from DFW's notebook at the beginning of each essay. With the lame table of contents you cant find where each essay is and you have to listen to interminable reading of definitions to get to the next essay

Worth a read for the serious DFW fan

I wouldn't necessarily have left all of the essays included in the book. It's piecemeal of his material for various magazines over the year and, while insightful and certainly entertaining at spots, it's overall just *ok* and I certainly don't believe Wallace would have chosen these specific essays for a collection of his material (for the most part these essays were available for him to have chosen from previously and he clearly opted not to do so).

Before every chapter (as punishment) Hachette Audio has a woman named Katherine Kellgren read long list of vocabulary words in the most annoying fake English Accent. I can't skip over them when I am driving in my car on mountain roads, so I have to turn the volume down and wait. The vocabulary words are not word including within the essays which are read by Robert Petkoff who has a perfect reading voice for David Foster Wallace. Why are they forcing us to learn these words when they are not included in the essays? Why were they not included a separate chapter and read by Robert Petkoff?

In the middle of the essays (any time) Katherine Kellgren interupts Robert Petkoff and reads the footnotes. She was NOT English. She was putting on a phony English Accent thinking he made her sound high class. She reads with a smug self congratulating tone as if she is very pleased with herself. I could tell right away there was something wrong with her voice. Nothing I have ever heard from Black Stone Audio ever sounded this bad. She has the worst reading voice I have ever heard on any audio book! Sadly I will exchange this Audio Book and buy the Kindle Edition. Robert Petkoff sounds fantastic as David Foster Wallace. I demand to find out who was behind this decision to not only use Katherine Kellgren but fix it so her voice can not skipped over. The only way to make this audio book work would be buy the CDs and use audio editing software to edit out Katherine Kellgren’s voice, and that is too much work as these are not the best of David Foster Wallace’s Essays. These are second string essays published after he died.

What am I missing?

Would you try another book from David Foster Wallace and/or Robert Petkoff and Katherine Kellgren ?

Not sure about that.

Do you think Both Flesh and Not needs a follow-up book? Why or why not?

So I listened to this because I had heard about DFW and wanted to see what he was like. I understand he is very popular and well respected so maybe I am just missing something. He gets really obsessive about stuff that I just don't find that interesting, maybe it is just my personality but I found my mind wondering. He is obviously very smart and it is brilliantly written but the topics bored me. Highly recommended if you love literary analysis and tennis, emphasis on the tennis.

Both Alive and Not

This one sags a bit here and there under the weight of specificity and obsessive opposition to solipsism and her modern indulgences, but remains well worth the trouble.