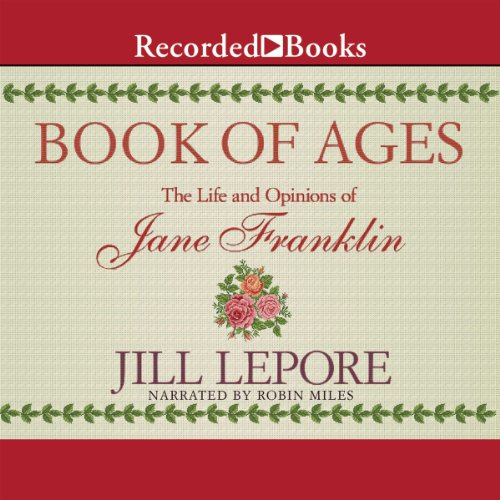 By: Jill Lepore
Narrated by: Robin Miles
Try for $0.00

From one of our most accomplished and widely admired historians, a revelatory portrait of Benjamin Franklin' s youngest sister and a history of history itself. Like her brother, Jane Franklin was a passionate reader, a gifted writer, and an astonishingly shrewd political commentator.

Unlike him, she was a mother of twelve Benjamin Franklin, who wrote more letters to his sister than he wrote to anyone else, was the original American self-made man; his sister spent her life caring for her children. They left very different traces behind. Making use of an amazing cache of little-studied material, including documents, objects, and portraits only just discovered, Jill Lepore brings Jane Franklin to life in a way that illuminates not only this one woman but an entire world - a world usually lost to history.

Lepore' s life of Jane Franklin, with its strikingly original vantage on her remarkable brother, is at once a wholly different account of the founding of the United States and one of the great untold stories of American history and letters: a life unknown.

What listeners say about Book of Ages

Women during and after the Revolution

This book offers incredible insight into the role of women and the burden they carried in the days of the United States. While her brother, Benjamin Franklin, was traveling the world and heralded as a innovative forerunner and scholar, Jane was spending her days caring for people suffering from consumption, while married to a deadbeat. I kept waiting for a reckoning for Jane. All I can think is how fortunate I am to not have been born 200 years earlier.

what a fantastic book

loved it every word. all the way to the last page of the appendix.

Bought this book for my Early American History course. It made a boring topic interesting and a good listen on my commute to school.

Life in the 1700s was harsh . . . families had a dozen or more children . . . and women and babies died in childbirth . . . death was a way of life . . . so was faith . . . and acceptance of one's lot in life . . . Jane and Benjamin Franklin, the children of a blacksmith who had immigrated to Boston from London, were unashamed of their working class background, and were two of a total of seventeen children of their father, Josiah Franklin . . . who was first married to Anne Child, then widowed, and next married to Abiah Folger, Benjamin and Jane's mother . . . Book of Ages is a wonderfully honest book, leaving nothing off of the story of Jane and Benjamin's childhood friendship, youth, and diverging paths as each eventually married and became adults . . . Jane, marrying young at age 15 and Benjamin, sowing wild oats and never really being the "settling" sort, but having a common law marriage with Deborah Read . . . the closeness of Jane and her brother, Benjamin, despite the fact that he spent years overseas is amazing . . . and one cannot help but to lament that so many of Jane's letters have been lost to history . . . but enough remain to see her toughness of spirit and will, her wit and growth as a person and as a woman . . . as a mother, I grieved with her as she suffered the madness of her son . . . and was furious as she suffered the laziness of her husband, without a peep of self-pity . . . the book is not short, for the detail that it brings . . . daily life, day in and day out . . . and some may find it tedious . . . but not me . . . for that is exactly what life is like . . . it is made up of minutes, hours, DAYS . . .thank you, Jill Lepore, for bringing us Jane Franklin's, Book of Ages . . .

Back story of Ben Franklin

If you could sum up Book of Ages in three words, what would they be?

Jane is a survivor during a difficult time in America.

It is a little slow in places, but overall very interesting.