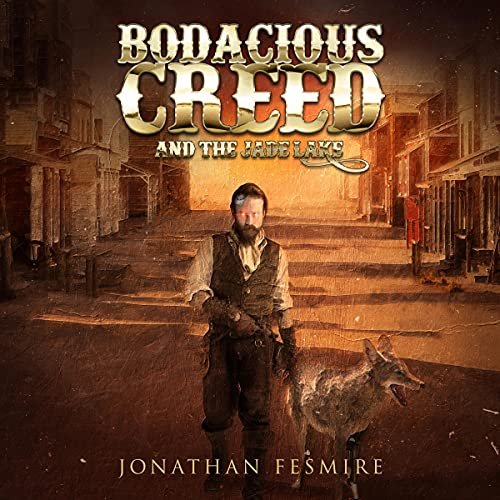 Bodacious Creed and the Jade Lake

By: Jonathan Fesmire
Narrated by: Drew Blood
Try for $0.00

James "Bodacious" Creed stopped a killer and helped bring peace to Santa Cruz, a coastal California city on the edge of the American frontier. Now, the undead lawman, resurrected with steam-based technology, takes on dangerous criminal cases as a private investigator.

One night while riding by the wharf, Creed hears a gunshot. He and his coyote companion, Coconino, rush to the scene. In a forest clearing, he finds two dead men and a dying woman. Mechanical parts ring her neck and wrist, and as she whispers of her travails, the former Chinese slave dies in his arms.

Someone in San Francisco is using illegal machinery to alter and control women like her. To hunt down the perpetrator, Creed travels to the City by the Bay. His journey takes him into the depths of Chinatown, reveals a secret society, and puts old and new friends in danger.

How can Creed learn the truth before more women are changed, manipulated, or killed?

What listeners say about Bodacious Creed and the Jade Lake

A wild world, Fesmire created. A really creative mashup of different genres. An undead, superhuman hero on a quest for justice! Loved it! Some heavy theme in here, which gave the story a lot of weight.

The performance was fantastic. There's a sprawling cast of characters, and the narrator handled them all consistently and distinctly. Expertly, I'll add! Incredibly well done.

Bodacious Creed To The Rescue!

This second book in the series was great also, but to have a complete understanding of the character of Bodacious Creed, the reader needs to have read the first book in the series. I'm enjoying the adventures of Bodacious Creed and his companion. I'm looking forward to more books in this series as Bodacious Creed is an awesome character. I recommend this series to others. If you've never tried Steampunk fiction before, this would be a good series to give it a try. Drew Blood's narration started slow for me as I was expecting the first narrator, but as the story continued I found that Drew's style gave the story its own unique voice and I was entertained by it. I was given a free copy of the audiobook and I have voluntarily left this review.

The Old West with Steampunk touches. Kept my intertest even tho this is not my normal genre! The storyline, character development, and narration were excellent.
This was a great stand-alone story, and now I have to get book 1 -- and watch for the next one in the series.

Wasn't sure if this would be good or not but it actually was. Short story, well enough pace and action 8/10.