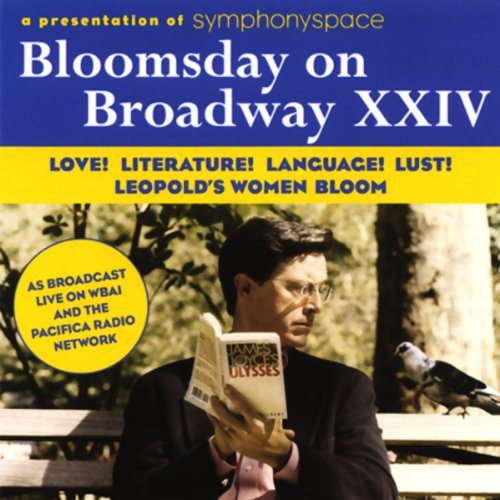 By: Symphony Space
Narrated by: Stephen Colbert
Try for $0.00

Bloomsday on Broadway celebrates June 16, 1904, the most famous fictional date in literature, when Leopold Bloom walked around Dublin in the pages of James Joyce's Ulysses. Since 1981, hundreds of acclaimed actors have joined avid Joyceans, writers, critics, and scholars on stage at Symphony Space to read selections from the book that heralded the birth of modern literature.

What listeners say about Bloomsday on Broadway XXIV

For Advanced Joyce Fans Only

Don't let the fact that Stephen Colbert is involved with this project lead you to believe this is comical but slightly informative romp through this literary epic. This presentation is designed for Joycean fans who are more devoted than the most reverant Trekkies at Star Trek conventions.

I was hoping this presentation would give me light and enjoyable insights into the significance of this monumental work - but found I'd need a few more college level classes first. They do a great job at bringing to life sections and songs of the work - but most selections are out of sequence and assume that you know what part of the epic they are jumping into and which mythological allegories they are comparing. But I can safely say if you are a Joyce fanatic you will appreciate and enjoy this program - and you'll probably start making plans to attend next year's party and share the Soda Break and Guiness.

I wish I could collect the whole set of these performances. These selections from Ulysses really bring the text to life in a way regular reading just can't. Just knowing there is an auditorium full of Joyce fans experiencing this with you is kind of a rush. Hard as it is to pick out just one favorite from all these bits, I have to mention the scene that they translated into Yiddish. I like to think Joyce would have found it as funny (and appropriate) as everyone else did.