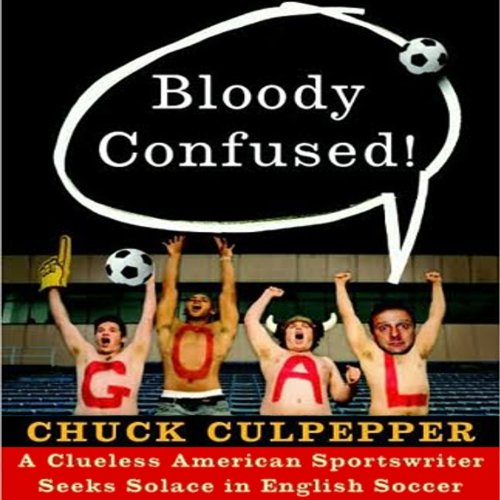 By: Chuck Culpepper
Narrated by: Alex Hyde-White
Free with a 30-day trial

Chuck Culpepper was a veteran sports journalist edging toward burnout...then he went to London and discovered the high-octane, fanatical (and bloody confusing!) world of English soccer.

After covering the American sports scene for 15 years, Chuck Culpepper suffered from a profound case of Common Sportswriter Malaise. He was fed up with self-righteous proclamations, steroid scandals, and the deluge of in-your-face PR that saturated the NFL, the NBA, and MLB. Then in 2006, he moved to London and discovered a new and baffling world - the renowned Premiership soccer league. Culpepper pledged his loyalty to Portsmouth, a gutsy, small-market team at the bottom of the standings. As he puts it, “It was like childhood, with beer.”

Writing in the vein of perennial best sellers such as Fever Pitch and Among the Thugs, Chuck Culpepper brings penetrating insight to the vibrant landscape of English soccer - visiting such storied franchises as Manchester United, Chelsea, and Liverpool...and an equally celebrated assortment of pubs. Bloody Confused! will put a smile on the face of any sports fan who has ever questioned what makes us love sports in the first place.

What listeners say about Bloody Confused!

A person who is both utterly jaded by the cliches of American culture and completely naive of and a bit reverential toward culture in the UK.

Not have the reader add a juvenile brat quality to the bitter views of the author.

As an American and a long time fan of English football i failed to gain further insight into uk fb or to be entertained. i have English and Scottish friends that would be the first to highlight that sports corruption in the UK is every bit as rampant as it is in the US however the author spends a line every paragraph, a full quarter of the book puking on everything American as greedy, backwards, mean-spirited and imbecilic while extolling all things English as ingenious, thoughtful, pure, efficient and noble. The man is dour and angry at his former country i love the uk and us but really I can't listen to this without feeling this old alcoholic sports writer's 40 failed years in America as they sour every one of his genuine ex-pat discoveries. I fail to see the entertainment value in his out dated cliches about America and i am glad that portsmouth fc is still a fourth rate club. LIVERPOOL FC FOREVER!

How difficult is it to get somebody who is familiar with sports or football/soccer to actually narrate a sports book. It can’t be that hard. Can it?! The narrator keeps mispronouncing UEFA. The E is pronounced like the E in BET, not like the E in BEAT. And when referring to an American college football team, the narrator refers to an organization called the NAAC rather than the NCAA. Does anyone proof or edit these things?!

This is a fantastic story! I hope every American Soccer Fan listens to this, and not choose a team, but live for a team.

I should have been the prime target for this book, since I too am an American who fell in love with English soccer while living abroad. I recognized so much of my history of learning about the intricacies of the how soccer in Europe is different from American football, with all the different concurrent cup competitions and histories and organizations of the league pyramid.

So why don't I love this book?

Because Culpepper is the worst sort of fan: it isn't enough that he loves his sport, he has to tell you constantly why your sport is worse. I personally have grown to love soccer more than the football I grew up watching, but I don't think people who prefer football are stupid or wrong for preferring their favorite sport. Culpepper, from the evidence here, does think that Americans who watch American sports are stupid.

He is also the worst sort of expat American: the one who is constantly going on about how America is worse than where he is now, and won't shut up about it. America has problems, I don't deny it. But it also has lots of good points too. It is hardly the backwards cesspool he seems to think it is. And England, like all places populated by humans, is hardly perfect.

Admittedly, there are two excuses for his attitude. The first Culpepper talks about at length, namely that he was burned out from years of being a sportswriter and having to cover the worst parts of American sports (scandals, money, etc.) while at the same time being prevented by his profession from enjoying all the positive aspects of fandom. The best parts of the book are him rediscovering the joys of fandom.

The other factor is probably just the result of all this being so new to him. I know from experience that is a common failing of new expats and fans to fall too much in love and not see the problems with their new obsession. I wonder if Mr. Culpepper wrote a book about the next 10 years of his fandom (the book is about the 2006-7 season) if it would not be much more interesting and balanced, especially considering the difficulties that his chosen club, Portsmouth, has experienced in those next 10 years (three more seasons in the EPL, then relgated again and again and again to the fourth level of the English pyramid, entering administration to avoid liquidation, not being able to pay its players, etc.) and the current resurgence (last year they won their league and were promoted to the third level and are currently on course to be promoted again).

I really enjoyed this book. It’s more about Portsmouth season from the year he wrote is than the EPL as a whole. It’s definitely worth a listen if you enjoy soccer though.

EPL for "my American brain."

Great! Love it!! Makes you want to move to England and follow a Premiere team. Then again how will i feed myself in England?

Utterly fantastic. Cannot recommend this enough to any fan of football (the real kind) who ever went to a game