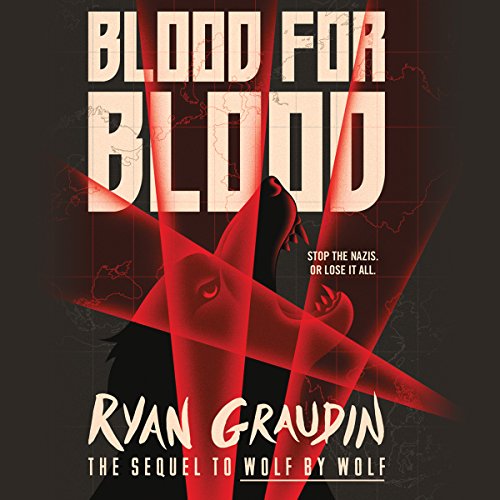 By: Ryan Graudin
Narrated by: Christa Lewis
Try for $0.00

The action-packed, thrilling sequel to Ryan Graudin's Wolf by Wolf.

There would be blood.

An entire world of it.

For the resistance in 1950s Germany, the war may be over, but the fight has just begun.

Death camp survivor Yael, who has the power to skinshift, is on the run: the world has just seen her shoot and kill Hitler. But the truth of what happened is far more complicated, and its consequences are deadly. Yael and her unlikely comrades dive into enemy territory to try to turn the tide against the New Order, and there is no alternative but to see their mission through to the end, whatever the cost.

But dark secrets reveal dark truths, and one question hangs over them all: How far can you go for the ones you love?

This gripping, thought-provoking sequel to Wolf by Wolf will grab listeners by the throat with its cinematic writing, fast-paced action, and relentless twists.

"Christa Lewis, who narrated Graudin's first WWII alt-history, Wolf by Wolf, narrates this companion. Lewis immediately picks up the dramatic intensity she built at the end of the first audiobook.... Author and narrator deliver on the promise of the first book as love and terror, courage and heartbreak keep listeners glued to a story that's as well told as it is consuming." ( AudioFile)

What listeners say about Blood for Blood

A welcome return to the world of Wolf By Wolf, allowing the author to tie up most of the loose ends left in the first novel and leaves us with a bittersweet ending.

Christa Lewis does a great job with the narration.

Recommended, but you really need to read Wolf by Wolf first.

the narrator does an amazing job. this book was a great finish to the duo! at first I thought it was too slow, but it certainly picked up. Great story!

I think the voice actor is really well-suited for Graudin's work. She can read the purple work with a poetic lilt without it feeling like an overenthusiastic community theater actor reading Shakespeare.

The world is as intricate and well-thoughtout as the first, clearly using logic to envision this other reality. I loved watching the characters react to new situations now that they know what is actually happening.

Seeing Luka come to terms with who he is, both his feelings for Yael and his cowardice of the consequences of realizing the truth of the Holocaust was very emotional and written gorgeously.
When Luka admits that he could have joined the resistance if he tried hard enough was so harsh because he didn't want to lose his privilege and he didn't want to put himself in danger. I loved how relatable Luka became, and that he realized you can always change for the better. His new resolve was lovely to read.

I loved seeing Yael forced to face the fact that she killed a man, and the wrong man at that. Her character went through so much in the first book, and I'm glad we got to see her grow even more in the second. Her reunion with Miriam was absolutely amazing; I was so happy that Yael finally had something good happen to her.
I really liked Miriam's character and her story. Being able to compare how they both created lives for themselves outside of the concentration camps was really cool. Miriam's character still felt true to what Yael told us about her from all those years ago, so that was really well-written that she seemed like the same person, just changed a bit due to the circumstances.

I wish we could have understood Adele a bit more, but she's just not a very bit character herself, even though she affects the story quite a bit.
I was so mad Felix never even thought for a second that he could have been hearing skin-shifters and not his parents until a really long time. And he still chose to betray the resistance. I wish he at least could have slipped some information to Yael to kind of even it out at least.

really loved it. it's full of unexpected twists and turns. great story and lots of fun.

This is an amazing alternative history. I ejoyed the sci-fi aspect of the story as well! If you've ever wondered what would have happened if Hitler had one, this book is for you. Other main points are loyalty, family, promises, & motorcycles.

So pleased to have had this author recommended to me. This is the third book I've read by Ryan Graudin and the second I've listened to performed by Christa Lewis. If you enjoy historical fiction with a cunning twist then this series is for you.

I’ve both read and listened to this series. It’s heart-stoppingly quick paced and intense while remaining respectful and so so human.