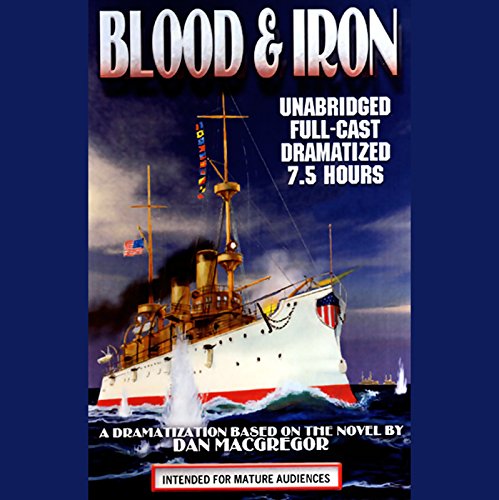 Beginning aboard the U.S.S. Olympia, Blood and Iron is the first in a planned series of six books chronicling the adventures of Levi Rankin. Fresh from the wilds of Wyoming, young Marine Corporal Rankin is savagely tested in the Spanish American War (Battle of Manila Bay) while serving under Commodore Dewey. Rankin's courage is rewarded with a promotion, and he comes of age and learns the lessons of leadership and betrayal in the heat of the Philippine jungles, gunboat duty on the Yellow River, and finally during the brutal Siege of Peking during the Boxer Rebellion.

"From beginning to end, the story has a lot of detail and energy." (AudioFile)

Abridged or Unabridged I loved it. Bring on the next five in the series. If you have ever been a Marine you will like it for the glimpse into life when the Corps was young. I am not sure I like the dramatization as much as narration, but I loved the story. Usually I listen to Audible on my daily commute on the "L", but this one had me listening in my kitchen. You won't be disappointed

This is a great story. Let me say that right off the bat. And if it was abridged they did a good job of it and there are no holes or gaps. If your a Marine you'll like it because it deals with a part of the history of the Marine Corps that most of us are a bit foggy on and hasnt been dealt with very much in books or movies. I liked the way that Macgregor inserted actual events (Dan Dalys actions during the Boxer rebellion)and real life characters (Smedley Butler who he names Buller)and weaves them around the main character. He did his homework on the technical side and I only found a couple of things that didnt fit, I think we had Lee straight pulls not Krags then and dont call me Sarge.
Like I said before this is a great story, however that being said the dramitization SUCKED. The fellow that played the main character, Levi was ok and the narrator was good but with very few exceptions the cast was awful. Way overacted and some of the accents were so fake as to be offensive If you can work around the awful voice acting and just pay attention to the story you'll like it.

I haven't listened to a production better than this in years. The book is well written and the acting and voices enhance an already good book. I will be watching for another book or production from this author.

Beware of this title unless you like abridged works. It's billed as 'unabridged' but the intro clearly states that it is an unabridged dramatization BASED on the book of the same title, by the same author. You could sort of say it is an unabridged version of the abridged version! Any way you look at it, it is NOT an unabridged reading of the original book as the description leads you to believe. I encountered this same subterfuge with the supposedly unabridged title, 'Calculated Risk.' Audible was gracious in refunding my credits when I complained but I hope in the future, notice will be given in the description.

If you did like and enjoy Richard Sharpe you will really like this one,I could not stop listening once I started, thanks Aubible.

I heard a few chapters of this book on XM Radio. I HAD to hear the rest of the book. It was the reason I signed up for audible.com. One of the best audio books ever! I know I will listen to it more than once! ~ Jenna

And it's such a #^*$!$@% shame! As some of the other reviewers (USMC vets it seems) point out the times (1898-1900), places (Phillipines, China river patrol boat, Peking), people and events (Battle of Manila Bay, Phillipines Insurrection, Boxer Rebellion, Seige of the Foreign Legations in Peking) of Blood and Iron are fascinating, exotic and little known. My fellow reviewers show their Semper Fi and make perfectly valid points about parallels with historical greats Dan Daly and Smedley Butler. Why aren't they absolutely furious about the lousy job this "dramatization" did with such terrific material? This story could have been ABSOLUTELY AMAZING in the hands of a good writer. Instead, it rivals the quality of the early volumes of the Mack Bolan canon. I listened to the very end in disbelief, hoping against hope that the story would heave itself up out of the muck and end in a more satisfying flourish. When it was all over, I popped the last disk from the CD player, gathered up the others and threw them in the round file.

This book is so well written that you feel like you are there with the charters. Story keeps yo u wanting more, to see how the adventure will turn out. Highly recommend this book.

it keeps you going on audio,the only bad part is its not a series, that would be ausume