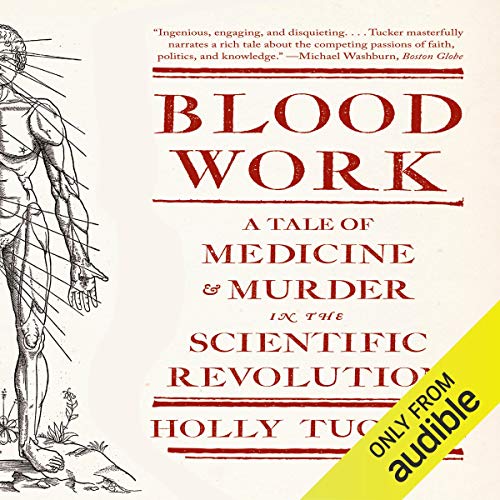 By: Holly Tucker
Narrated by: Julia Farhat
Try for $0.00

In December 1667, maverick physician Jean Denis transfused calf’s blood into one of Paris’s most notorious madmen. Days later, the madman was dead and Denis was framed for murder. A riveting expos of the fierce debates, deadly politics, and cutthroat rivalries behind the first transfusion experiments, Blood Work takes us from dissection rooms in palaces to the streets of Paris, providing an unforgettable portrait of an era that wrestled with the same questions about morality and experimentation that haunt medical science today.

“Excellent.... Tucker’s chronicle of the world of 17th-century science in London and Paris is fascinating.” (The Economist)

What listeners say about Blood Work

Can't even give an honest review of the story because the sound is so bad I can't stand to listen to it.

Would you be willing to try another book from Holly Tucker? Why or why not?

Sure, if I could hear a real narrator read it.

What made the experience of listening to Blood Work the most enjoyable?

Interesting medical history for period about which little is commonly known.

Narrator does not appear to have professional voice -- my wife and I both felt that her inflection and tone were incredibly "grating". Attempts at dramatic inflection just made things worse. Almost painful to listen to.

While enjoyable, it was not such a compelling narrative that I felt the need to get through it in one sitting. Part of the problem was the poor narrator. Listening for too long was just painful.

I will exercise care never to order a book with this narrator. Audible should not use this narrator again -- at least for any kind of non-fiction (which is genrally all I listen do).

Is that even a human narrator?

After listening to the authors interview on Stuff You Missed in History Class, I was keen to read Blood Work. Unfortunately I could not find it locally and it isn't available on kindle, so I purchased the audio book. I wish I had looked at the reviews first!!!
The narration sounds like a text to speech computer programme. After 2 minutes I couldn't cope any more and turned it off. I'm sure the book is great, but the audiobook should be avoided.

Quality of her voice

A great book about history and science

This is one of the best science books I have listened to on audible. Well researched and engagingly written. Tucker builds a compelling narrative around the facts of the trial of Jean Baptist Denis, a fascinating and lesser known participant in the scientific revolution.

The solid research that underpins this book makes the extraordinary tale even more compelling.

Tucker's description of transfusion and vivisection in the seventeenth century are a grisly but fascinating onslaught.

I hope that Audible will publish more science books of this quality and less of the dubious self-help and pseudoscience vanity books.

What a shame. great writing, robotic reader. How could someone give the okay on this?

Book is great but the narrator is horrible. She sounds like a robot!! It’s so annoying that I might just read the book so I can stop listening to her.

The content is interesting but the narration is a bland monotone that, while well-pronounced and articulate, is almost completely lacking in emotion or flavor.

It ends up sounding a bit like a Wikipedia article being read by a computer.

As a an RN I’ve given my share of blood. It’s been fun to listen to the history of this procedure. The narration was delightful. I hope Julia Farhat does more great work.

I will have to read this book because I couldn’t make it through chapter one with the narration.