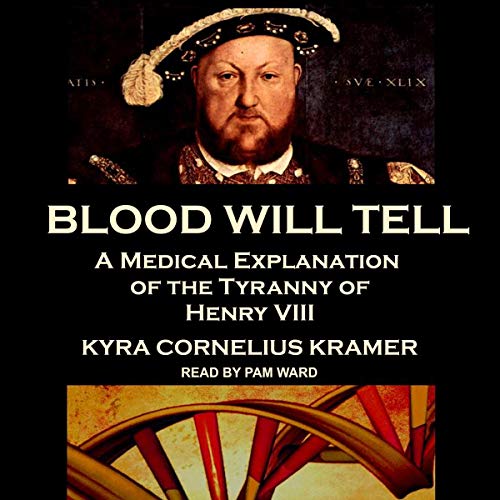 By: Kyra Cornelius Kramer
Narrated by: Pam Ward
Try for $0.00

With his tumultuous love life, relentless pursuit of a male heir, and drastic religious transformation, England's King Henry VIII's life sounds more like reality television than history. He was a man of fascinating contradictions - he pursued a woman he loved for almost a decade only to behead her less than four years after their marriage. He defended Catholicism so vigorously that he was honored as defender of the faith, but he went on to break with Rome and have himself declared supreme head of the Church of England. Worst of all, the king who began his reign praised as "hero" and "lover of justice and goodness" ended it having metamorphosed into such a monster that he was called the "English Nero".

What could have caused these incredible paradoxes? Could there be a simple medical explanation for the king's descent into tyranny? Where do the answers lie? Blood will tell.

What listeners say about Blood Will Tell

I don't know that I would have had the band width to read this book and truly appreciate it as much. The narrator was wonderful! She engaged me and held me right where I needed to be in order to make sense of the material. Fortunately for me, the author did the same. I've so desperately wanted a a reason not to despise Henry. I was always in love with the versions of the young Tudor Prince and King that I read about. I could not fathom what happened. Kyra managed to educate me without intimidating me. She was hilariously informative and connected more dots than any historical novel ever did for me, fiction or non fiction. I'm glad to give King Henry a dx mental illness. I married a narcissistic man so I knew it wasn't that dx🙄 Thanks ladies. This book gets another listen over the summer on the beach 😎 I love Henry💜

subject matter was often unrelated to medical theories, but rather was largely a biographical narrative which could be found in any number of better written accounts. The author presented many theories (which often contradicted generally accepted historical beliefs) with little to no evidence outside of personal beliefs to back them up. I enjoy a good counter-theory, but there must be reasoning for it. In addition, the voice of the reader was a rather grating pitch and just made listening difficult overall.

A vindication for Anne Boleyn?

I feel like this book doubles as a vindication for Anne Boleyn and Katherine Howard. I was frustrated when a considerable portion of this book was purely devoted to explaining why Anne Boleyn was a doe eyed, innocent, naive victim. It frames her as though she was repulsed by the idea of marrying Henry and was defenseless to his resolve to make her his wife. I didn't enjoy these asides that were all about defending wives when the reason I was listening was to hear about the medical issues Henry faced.

It is also frustrating that anytime something looks like it might be attributed to a certain illness, it is immediately contradicted by something else. The author will say something that happens and how it may look like one illness, and then pull out another thing that is an indication that he didn't have said illness. I just wanted there to be some solid stance the author would take on a lot of illnesses or personality disorders it mentions.

I give it three stars because a lot of the writing style is entertaining, there are some interesting facts I hadn't considered before, and the narration is great. I was displeased at first that the narrator didn't have an English accent as I have become accustomed to in all the Tudor books I have listened to, but she did a great job and I forgot about my 0reference to hear British history in a British accent.

I really enjoyed the detailed descriptions in this book about medicine at the time, speech and why certain words had different meanings then, and how the narrator did such a great job giving emphasis on certain parts. Greatly enjoyed!

This was an interesting look at the actions of King Henry VIII. There’s some clever humor and some information I learned for the first time. The entire book is based on speculation which has to be considered while listening.

I really enjoyed this book. The fine details, the intertwined relationships of all the key players.
Gosh, the lengths Henry went to justify his means were absolutely shocking. It was further proof to me why separation of powers is such a vital safety net.
One man should never have that much power (ie. the Trump administration. ) History repeats itself continually because we are too stupid to learn.

I am really glad I listened to this book.
The narrator did a great job and the author bought this history lesson to life. Most of the time I was deeply ingrossed and interested.

Listening to Pam Ward echo the thoughts of Kyra Cornelius Kramer is like being chained to a chair with lock on headphones.

better than I expected

The title made me suspect this was another writer with a pet-theorie about the cause of Henry VIII character, but it turned out to be a far wider look at the king and his surrounding influences. Very enjoyable.

a very plausible reason for the tyraniccal life of Henry VIII. we'll never know unless we can look at the remains of this Tudor king

Unfortunately, due to quality of narration, this book was difficult to listen to. I cannot recommend it therefore.