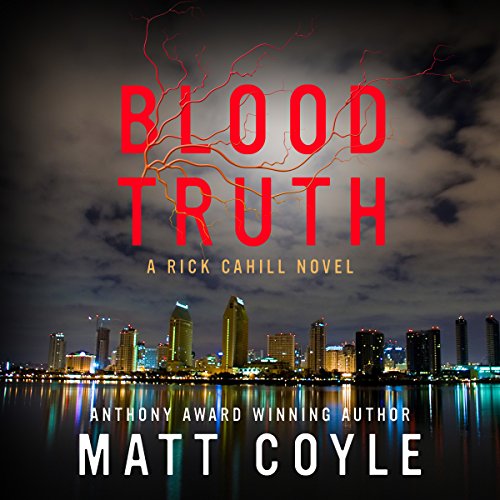 By: Matt Coyle
Narrated by: Travis Baldree
Try for $0.00

Rick Cahill has long feared the truth about his own blood - the blood of his father coursing through his veins.

When a long-hidden safe unlocks clues about why his father was kicked off the police force 27 years ago and then spiraled into an early drunken death, Rick determines to find the truth, even if it proves the one thing he's always feared.

But as he grapples with his father's past, the woman he still loves pleads with him to find out if her husband is having an affair - or is involved in something much more sinister. Could the truth send her back into Rick’s arms? Would he have a last shot at happiness? He may never get the chance to find out, as killers who will do anything to protect their secrets lurk in the shadows.

What listeners say about Blood Truth

A Great Story With Lots Of Action

This is my first Matt Cole book and I am so impressed with the book I have already purchased the first book of the series. Storytelling is a skill and Coyle has got it. This book is one that is easy to get into and keeps you interested till the end.
It’s a story about bitterness and dying inside day by day. Its a story about wondering who your father really was inside and what the clues about him really mean. Was a hero or a crook? It’s a story about swindlers, cheats, and conspiracies. It’s a private eye story set in the modern age in San Diego and La Jolla with many of the traditional moorings such as a lone wolf st odds with the local police, run ins with the local scion of wealth, and mobsters hovering in the background. A lot of fun to listen.

I was given a free copy of this book for an honest and unbiased review.

Travis Baldree was outstanding with the delivery story.

I will listen to literally anything narrated by Travis Baldree - his narration is always phenomenal without fail. 'Blood Truth' is the 4th book in the Rick Cahill series and while I started on book 4, I had no trouble getting into the story and following along. I intend to go back to the beginning because 'Blood Truth' was so compelling! Rich Cahill is a character you won't soon forget and the competing, action packed story lines in this thriller will leave you satisfied at the end. I would recommend this book to anyone at all who enjoys a mystery/thriller!

Blood Truth is Book 4 in the Rick Cahill Series but can easily be enjoyed as a standalone. With lots of action and two great storylines, I was hooked from the beginning. Terrific writing and interesting characters made the 10+ hours fly by. Secrets from the past will finally be revealed, as well as those of his ex-girlfriend's husband. But what will Rick do with the information?

Another highlight of this story was the outstanding narration of Travis Baldree. He did a wonderful job of drawing me in and holding my interest throughout. Blood Truth was a great listening experience and I would recommend it.

Excellent narration of a great cold case mystery. Rick is a PI, ex cop who doesn’t have a great reputation with the local police. After his ex contacts him to investigate her husband for a simple case of adultery adultery, events are set in motion that bring him face to face with his fathers alleged corruption. It was an excellent story that I also found frustrating and anxiety provoking. The cops are sooo irritatingly stupid and pompous to Rick. This is my first in the series and it is fine as a stand alone, but I will be seeking out the others so I can understand Rick’s situation better. I received a free review copy of this book at my request and have voluntarily left this review.

This story had me from the start! Travis Baldree did a great job with the narration! I was given this free review copy audiobook at my request and have voluntarily left this review.

Where does Blood Truth rank among all the audiobooks you’ve listened to so far?

Of course it was the main character

I loved his intonation, and his ability to impersonate voices

It made me alert and interested. This book is extremely addictive. I listened to it while I was driving to school and back and it was hard to leave my car sometimes, because the story was very interesting.

This book was amazing I wish I had listen to the others in this series. I loved the whole story line and I was unfamiliar with Ricks story. I loved the 2 story lines going on at the same time. A wonderful P.I. story with secrets at very turn! This book is more than worth a credit and without reading the others in the series I can guarantee they are worth reading!! The author created the best protagonist that a mystery could ask for who is Rick and what will he/wont he do to solve his father's "crimes"?!! A maybe bad guy and surprise good guy all rolled into one! I received this book for free for an honest review.

"The storyline is crisp and moves at an enjoyable pace. There is humor, which is sometimes dark, but will have you chuckling out loud.... I truly enjoyed reading Blood Truth and look forward to reading the whole Rick Cahil series.
The narration is impeccable.. Travis Baldree gives an masterful performance of the characters depth and style that I have not in quite some time.. !!

This book is heady, and interesting, a being a fan of the Noir genre I have to say it's a must read.!!!
"I was given this free review copy audiobook at my request and have voluntarily left this review."

This is the second Rick Cahill by Matt Coyle book that I have listened to. I am glad to have heard “Dark Fissures” to get a bit of background, but this one can also stand alone. I would definitely love to read the first two in the series to get even more background. Private investigator Rick Cahill is asked by an old girlfriend, Kim Connelly, to follow her husband as she is unsure if he is being truthful with her. In a second story line Cahill gets access to his late father’s hidden safe. This leads to safety deposit box, and an unsolved murder from 28 years ago.. Rick investigates hoping to find confirmation that his father was or was not “a bad Cop” I thoroughly enjoyed this book and Travis Baldree’s narration. I look forward to more in the series.
I was given this free review copy audiobook at my request and have voluntarily left this review.

The setting and main characters were all very visible in my mind; many many plots behind the main detective work...excellent writing Matt Coyle. Your foreshadowing and tidbits of info kept me guessing and of course I really didn’t see the person who really done it until the end of the book ... it kept me guessing and kept me interested. The narrator did a fabulous job even assuming female voices the characters were very clear to me. I so enjoy listening to Audible as I drive, sure makes the commute much more enjoyable.

Even mo than the truth.

Rick's father had been a cop for 22 years, respected by all and loved and admired by his son. Until suddenly, after the killing of a man named Phelps, a murder still unsolved 28 years later, Charlie Cahill was suspected of being dirty, of taking mob money, and dismissed from the force. He turned to drink, his wife left him, and he spiralled downwards to die an alcoholic just 8 years later. By then the respect that Rick had held for him was gone. His father had not lived by the code that he'd preached.

The discovery of an old hidden safe in the house they had lived in revealed a gun, a key to a bank safe deposit box and an envelope containing fifteen thousand dollars. For Rick it was the final proof that the rumours were true - his dad had been dirty. But why had he not touched the money even when the family had struggled so hard to make ends meet? He wished the revived memories would go away.
Then a new job, the usual, following a man whose wife thinks he is cheating on her. But it isn't quite a normal case - the wife is Kim who he had loved and lost. And it looked as if Kim's husband was guilty as expected, disappearing for 90 minutes into an hotel room with Sophie, a rather beautiful woman. Photos were taken, results shown to Kim. But there was more going on than simple infidelity

This exciting and well constructed book alternates with action and then quieter, more introspective periods, just long enough for the reader to catch their breath before one again p!unging into the set and furious. The characterisations are good, three dimensional, and Rick himself could walk off the page and mingle, a fully fledged real person. He's clever at what he does but not infallible, pleasant enough but it really nice and his past is still influencing him, both the good and the bad. A loner, with a touch of the loser.

Rick is beautifully interpreted by narrator, Travis Baldree. His voice, slightly downbeat and noir, has perfect pacing and is a pleasure to hear, well modulated, conveying quietly the full emotional impact of the story. Other protagonist voices are also distinctive and appropriate. His performance carries the book forward, adding to the already good story.

My thanks to the rights holder of Blood Truth who, at my request, gifted me with a complimentary copy via Audiobook Boom. This is the second book that I have read in the Rick Cohill series, but stands alone, no previous readings necessary. However, I will certainly be looking out for more books by author Matt Coyle and, hopefully Mr.Baldree, and i have no hesitation in recommending this book to anyone who enjoys a good detective based mystery thriller, full of action but not at the expense of story, peopled by well constructed believable characters.

The style of the narration and story was that of a traditional 1920's private investigator and although this could come across as a bit "cheesy" it was great. it was very entertaining and i would always look forward to driving to work to listen to the next part.
Well worth a listen....who doesn't like a little bit of cheese every now and again...