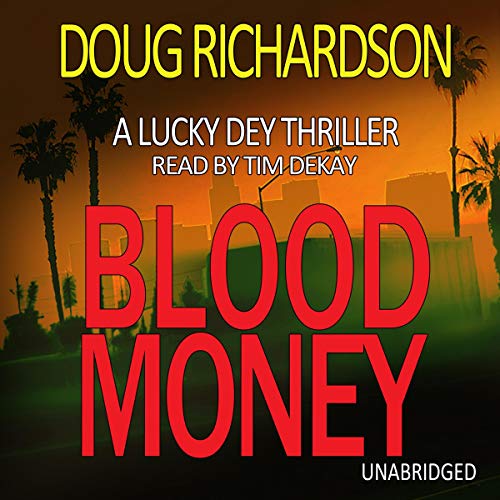 By: Doug Richardson
Narrated by: Tim DeKay
Try for $0.00

When deputy Lucky Dey discovers his little brother has been murdered, he’ll stop at nothing until he takes down the cop-killer.

Hell-bent on getting answers, he disobeys his superiors and follows the trail of a killer, who’s driving a hijacked truck full of illegal contraband.

Lucky finds himself in L.A., trapped in a storm of media and political indifference. The entire city is whirling in the wake of a major star’s fatal accident and people want a story - a story that might be more tangled than anyone ever imagined. With peril and mayhem around every corner, the risk-addicted cop might not be so lucky this time around.

What listeners say about Blood Money

Blood Money is the first book in the Lucky Dey Series of Mystery Thrillers by Doug Richardson and it was released in audiobook format this July, about 6 years after its original publication. As the saying goes, better late than never, especially when we are talking about such an interesting, well written and immersive novel.

The audiobook is narrated by Tim DeKay and discovering him was another nice surprise, as his reading style and voice reminds me a lot of the great Dick Hill, who has retired from the Audiobook Industry about two years ago. But, i’ll get to Tim later.

In Blood Money we follow deputy Lucky Dey as he tries to find and stop a very dangerous individual that at the beginning of the story kills in cold blood Lucky‘s little brother and two others, one of them a rising star in Hollywood, loved by millions of children.

Haunted by guilt, fuelled by hate, disregarding all the orders from his superiors, Lucky follows the trail of murder and destruction left behind by the killer. The only compromise he does is that he grudgingly accepts to be paired with an LAPD Detective.

What follows is an unputdownable adventure, filled with action, interesting characters, immersive scenarios and set in and around Lost Angeles, aka The City of Angels.

The audiobook version of Blood Money is brought to life with much love and work by actor and now, narrator, Tin DeKay. He reads the story in a voice that many of us audiobook listeners will at times confuse with Dick Hill, but let me assure you that none of them knew about one another until now. I fixed that, as I consider Dick a great friend. Even he said that the similarities are there for sure.

I mentioned this in my review because what can be a bigger compliment to a newcommer in this industry as to be compaired with one of the best voices in it. Rest assured, although Blood Money is his first audiobook, Tim is a renowned actor who played important roles in a lot of TV Series for USA and HBO, plus other appearances in movies and theatre.

Tim reads the story, acts the parts, brings all the characters to life with care and keeps the action going all the time. I am really glad that this series has such a great narrator, because that makes all the difference, between a good audiobook and one made better by the man or woman who brings it to life in the listener’s mind.

Both author Doug Richardson and narrator Tim DeKay are in top shape with Blood Money and I will be keeping an eye for all upcoming audiobooks in this series. At this time there are two more novels available in audio and I’ll review them both in the upcoming months, as this pair of author and narrator deserves a big shoutout for what they are doing.

Oh, yeah, and one more thing. Doug Richardson has written in the past such movies as Die Hard 2, Bad Boys and Hostage, so you can bet that he knows how to tell an entertaining story.

If you enjoy Mystery Thrillers, if you like Michael Connelly or Robert Crais, and miss, like I do, Dick Hill as narrator, you’ll be very satisfied with Blood Money.

Plese vote Helpful below if you like this review and find more of them here and on theAudiobookBlog dot com.
Sometimes I post reviews at the author / narrator / publisher's request.
Thank you,
Victor

A fun and for LA locals even more fun engrossing store. I throughly enjoyed it.

The book gripped me from the start. It's dark! But the characters are layered and the plot is nuanced. Really good writing and narrating. It's a series so I look forward to more of these characters.

A fun and exciting ride.

I’m not big on fiction. I like biographies and non fiction but Blood Money had me from chapter one. I loved the writing and all the characters were so specific and compelling. But what brought this book to life was the outstanding performance of Tim Dekay. This reader is truly amazing. There is a fine line when you read a book in my opinion— you can flatline or go over the top in a way that draws attention to the reader and you lose the story. NOT IN THIS CASE. Mr. Dekay found the perfect balance that draws you in and never lets you go. His read never gets in the way or takes you out of the story. Can’t wait for Book 2

“I promise you'll notice subtleties and shadings you may have missed the first time around,” writes author Doug Richardson in his email press release to all of us rabid Luckyland fans.

Such as when Lucky’s little brother Tony Dey as a Kern County Sheriff’s Deputy is working a metal-twisting roadside accident involving a Porsche Cayenne and its two injured occupants. DeKay switches from his pitch perfect and controlled cadence narration to betraying just enough fear in the younger Dey's voice when he’s pleading to a nearby trucker for assistance.

All ears we immediately sense something is up, something is wrong with this accident that all eyes we can’t see just by reading the book alone. At least until it’s finally spelled out to us, but by that time we’ve missed out on the enjoyment of the growing suspense the author masterfully built into the text.

However with Doug Richardson's excellent selection and audio partnership with Tim DeKay, like salt to food and how it can pull out it’s hidden flavors DeKay's performance allows us to taste and savor this tension building suspense. At least up until the trucker switches gears on the deputy, and a new terror begins …

I’ve enjoyed Hollywood screenwriter and thriller author Doug Richardson's story-telling ever since I stumbled across his Smoking Gun blogs long ago. And I haven’t stopped gushing since.

So, what do you say? Are you against hours of dopamine grade entertainment?

I welcome you to download Blood Money today. DeKay will read, and you – just sit back, relax and enjoy the listen!