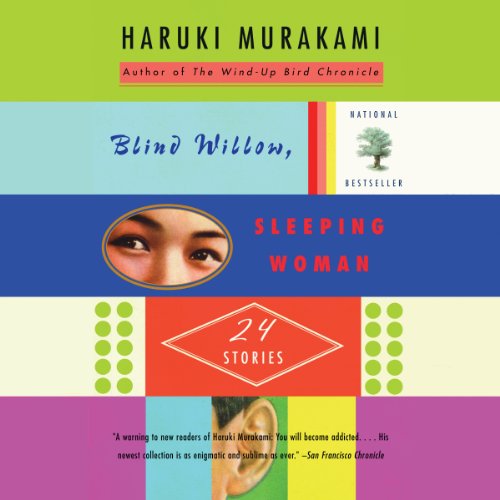 By: Haruki Murakami
Narrated by: Patrick Lawlor,Ellen Archer
Try for $0.00

The 24 stories that make up Blind Willow, Sleeping Woman generously express the incomparable Haruki Murakami’s mastery of the form.

Here are animated crows, a criminal monkey, and an ice man, as well as the dreams that shape us and the things for which we might wish. From the surreal to the mundane, these stories exhibit Murakami’s ability to transform the full range of human experience in ways that are instructive, surprising, and entertaining.

“A true miscellany [or] more like one of those overstuffed, career-spanning CD box sets…[But] the tales seem to speak with one, very seductive, voice. That voice, in each of these wildly varied excursions into the strange, dim territory of the self, says that someone named Haruki Murakami is still looking, quixotically, for something less fragile, less provisional than the usual accommodations we make do with on the road.” (Terrence Rafferty, New York Times Book Review)
"A virtuosic demonstration of Murakami's incredible range . . . thrilling, funny, sad, moving, scary--all at once. Since 1980, the year Haruki Murakami wrote his first short story, the Japanese author has been a walking definition of genius . . . He is a master of tone, and can manipulate a reader's curiosity at will, [and he] approaches the large subjects indirectly, through mood and bizarre occurrences, and always trusts his reader to be moved." (John Freeman, Atlanta Journal-Constitution)
"In this extraordinary new story collection by the Japanese writer Haruki Murakami, reality is ever in danger of breaking loose of its moorings . . . The inconsequential registers as significant in these wonderful stories as people struggle to figure out how to be, and what 'normal' means, if anything." (Joan Mellen, Baltimore Sun)

Amazing collection of short stories. While I prefer his novels, simply because I love his writing so much that I love the fact I can stay longer in a novel's unique reality than in a short story's, it must be said that these short stories were also a fantastic experience.

What fantastic voyages! What surreal experiences intertwined with moments that are instantly relatable! I find Murakami extremely brilliant and quotable, I have made countless Facebook status updates that are just quotes from his works. This short story collection is no exception, with plenty poignantly worded quotes that speak to me.

Those who have read Murakami's novels will recognize that one of the short stories is almost like an excerpt from one of his novels... I didn't look at publication years but I assume this short story collection came first. Perhaps the short story is what inspired the novel to come to be? If so, I wonder if any of the other short stories will blossom into full length novels someday.

Not bad Not great

Stories were good but the narration choices were just awful. Patrick is very shouty. Ellen is alright.

Not the right actors

Murakami has a particular tone to his books and the actors chosen for this book totally through off the kind of writing he’s well known for. I couldn’t finish the audio at all. Preview before buying.

MURAKAMI’S short stories are easily to be engaged. The narrators are great. The stories are all very engaging and fascinating.

This author is usually creative and amazing but

This particular book of short stories was bland. I kept thinking I must be misunderstanding something.