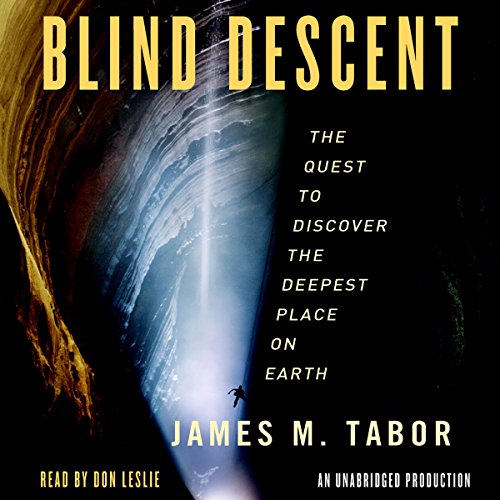 The deepest cave on earth was a prize that had remained unclaimed for centuries, long after every other ultimate discovery had been made: both poles by 1912, Everest in 1958, the Challenger Deep in 1961. In 1969 we even walked on the moon. And yet as late as 2000, the earth’s deepest cave - the supercave - remained undiscovered. This is the story of the men and women who risked everything to find it, earning their place in history beside the likes of Peary, Amundsen, Hillary, and Armstrong.

In 2004, two great scientist-explorers are attempting to find the bottom of the world. Bold, heroic American Bill Stone is committed to the vast Cheve Cave, located in Southern Mexico and deadly even by supercave standards. On the other side of the globe, legendary Ukrainian explorer Alexander Klimchouk - Stone’s polar opposite in temperament and style, but every bit his equal in scientific expertise, physical bravery, and sheer determination - has targeted Krubera, a freezing nightmare of a supercave in the Republic of Georgia, where underground dangers are compounded by the horrors of separatist war in this former Soviet republic.

Blind Descent explores both the brightest and darkest aspects of the timeless human urge to discover - to be first. It is also a thrilling epic about a pursuit that makes even extreme mountaineering and ocean exploration pale by comparison.

These supercavers spent months in multiple camps almost two vertical miles deep and many more miles from their caves’ exits. They had to contend with thousand-foot drops, deadly flooded tunnels, raging whitewater rivers, monstrous waterfalls, mile-long belly crawls, and much more. Perhaps even worse were the psychological horrors produced by weeks plunged into absolute, perpetual darkness, beyond all hope of rescue, including a particularly insidious derangement called The Rapture.

James M. Tabor was granted unprecedented access to logs, journals, photographs, and video footage of these expeditions, as well as many hours of personal interviews with surviving participants. Blind Descent is an unforgettable addition to the classic literature of discovery and adventure. It is also a testament to human survival and endurance - and to two extraordinary men whose relentless pursuit of greatness led them to heights of triumph and depths of tragedy neither could have imagined.

What listeners say about Blind Descent

I'm an adventure/travel story buff. I loved Into Thin Air, Lost City of Z, Shadow Divers and Endurance. This one ranks right up there with those amazing true stories. I'm amazed at the courage it takes to explore the deepest caves in the world and the dibilitating panic attack they call, "The Rapture" that can hit anyone at anytime whilst inside the deep recesses of the Earth!! I highly recommend this adventure and the narrator does an excellent job. A credit well spent!!!

Well, I am always lookiing for books that inform in areas which are unfamiliar. So with some interest I downloaded Blind Descent. I actually put off listening because my other Audible downloads seemed more interesting. Well, this is one of the best books I have listened to in years and I have been following Audible for a long time and Books on Tape before. This is an adventure story, science exposition, and I can't say what else.

Anyway, this is James Tabor's effort to describe the work of primier cavers (Bill Stone and ALexander Kliimchouk) as they labor to find the world's deepest caves. It details their adventures, the logistical problems encountered, political maneuvering necessary and everything else that you cannot ever expect in advance.

The book is wonderfully written and researched. Don Leslie could not be topped in his reading. Grab your mouse and click "Buy" - now. Download this volume and plug in your ear phones as soon as you can. It is well worth the time.

Being an explorer myself or kind of passionate about the subject, I can't get the headphones out of my ear. Amazing job by Tabor and great narration by Don Leslie.

I never knew there were caves that existed like that on this planet. Exelent on going in to the details of what it takes to discover new frontiers; let downs, failures, sucesses and inventing new and improved technolagies to do so.

What could James Tabor have done to make this a more enjoyable book for you?

1) Tabor sets up his story with the assertion that people historically have mourned the loss of exploration with each great discovery. After every accomplishment (crossing the Atlantic, stepping on the moon, etc.), people have thought that it is the end of exploration. Then Tabor says, “No! There is another! Finding the deepest cave is just as big a deal!” That’s fine with me—that seems worthy of being important. However, Tabor calls the discovery of the deepest cave “the LAST great discovery” many, many times. By saying this, he is guilty of doing exactly the thing that he so boldly ridiculed! Talk about undermining his own thesis!

2) One of Tabor’s major themes is that caving is an equal among other kinds of exploration that have more recognition. Tabor tirelessly references other adventures: climbing Everest, reaching the South Pole, trying to reach the South Pole (Shackleton), walking on the moon, and deep sea diving. Basically, the book goes something like this:

Tabor’s support for his theme of the danger and greatness of caving is simply analogy after analogy. After the first few mentions of mountaineering, I started to yawn. Can't he let caving stand on it's own? He needs to quit using analogies and just to a better job of describing the subject on hand. Tabor was probably inspired by tales like “Into Thin Air” and “Endurance”, but his own story pales in comparison. Krakouer and Lansing had me on the edge of my seat and nearly crying when they told stories that were suspenseful, scary, and beautiful. The heroes in these stories were people that I marveled at. Tabor’s CONSTANT references to these other types of exploration were simply a crutch that he hoped would make his story equally impressive. The descriptions of caves were dull and the human elements were uninteresting. For example, one of Stone’s girlfriends made pancakes once, and I was like “Oh…so? Who cares if she made pancakes?”; that’s what the entire book was like.

3) Why did Tabor keep calling this thing a race? The competition between was between two different caves. It didn’t matter at all which explorers finished first, one cave was deeper. It never was a race.

4) Okay, I’ve criticized Tabor’s writing skills enough. This was my first book about caving. I looked at some pictures of Krubera online and it looks terrifying and awesome! The people who explore supercaves must be very brave and thoughtful. I would love to learn more from an author who is a stronger writer.

Sorry for all the complaining, but I didn't enjoy it much.

Race to the Bottom of the Earth

This story will introduce the reader to the little known world of extreme deep-cave exploration. And you thought mountaineering was tough? At least they could see what they had to climb and rappel! The author and narrator do a good job of transporting the listener/reader into the grueling, dangerous, and often terrifying pitch black darkness of the cave, as well as character studies of some of the modern-day Hillarys and Shackletons who voluntarily, and eagerly, descend. Well written, fascinating, this book made me both search online for videos and websites of extreme caving to learn more, as well as thinkig that this is something I'd never want to do!!! Highly recommend to fans, like myself, of adventure stories like "The Worst Journey In The World" and "Into Thin Air".

So few books are written about cave diving and exploration, this is a fascinating account and description of underground waterfalls and cave exploration that goes beyond imagination. I loved this book so much I've listened to it about four or five times.

For the Most Part Quite Entertaining

I listened to this book straight through on a long road trip. I found it educational and it painted a good image of what was happening in the caves and life of the main characters in the book. It tried to put you in their shoes. Finding the deepest cave.

This book is immensely interesting & informative. The achievements of these super cavers verges on the unbelievable. A real life page turner

I really like how the book presents two separate accounts of teams seeking the same goal. Very good read.

Fascinating look at a world I knew nothing about

A great introduction to the world of caving and cave diving in the worlds deepest caves. I thought it was at its best in the first two thirds when focusing on the Americans in the Mexican caves.