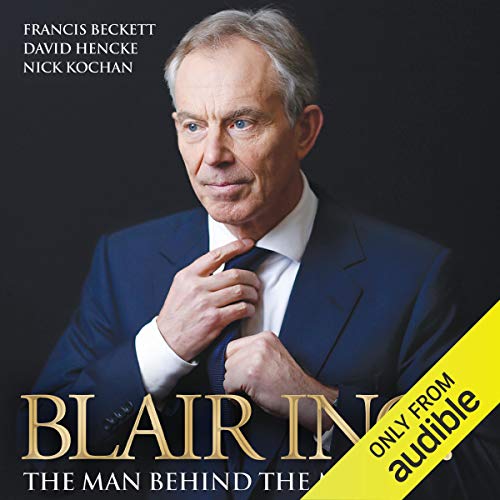 Since he left office in 2007, the empire of Tony Blair has grown exponentially. As a businessman he has been unprecedentedly successful for a former public servant, with a large property portfolio and an estimated GBP80 million of earnings accrued in just a few short years. But how has he managed to achieve this?

Being an ex-prime minister comes with certain advantages, and besides his excellent state pension and twenty-four-hour security team, Blair enjoys the best contacts that money can buy - as do those willing to pay him for access to those contacts. Consequently Tony Blair Associates' clients can be found around the world and include the controversial presidents of Kazakhstan and Burma. There is also Blair's role as special envoy in the Middle East.

While his record as a peacemaker is in doubt, the position has brought him into contact with a variety of oil-rich potentates in the region who now number among his most profitable clients. Blair Inc.: The Man Behind the Mask takes a close look at the complex financial structures in Blair's world. From the many layers of tax liability to the multiple conflicts of interest produced by his increasing web of relationships, this book exposes the private dealings of this very public figure.

I was expecting to enjoy this book as I have an interest in the subject matter however I found it to be an effort to listen to and unable to hold my attention. I gave up half way through.

Blair is a snake (Riled me but a great read)

This book is a brilliant insight into the world of Tony Blair and his shady dealings. He is a sneaky, money-grabbing individual who sidesteps the truth, never gives a straight answer and then wonders why people hate him.

He not only lied about the Iraq war bit he has abused his position as Middle East Peace Envoy to cuddle up to bad people to land oil contracts for his mates, open doors for the likes of JPMorgan and taken money from dictators to help them improve their image.

He is a master manipulator and has no care about what people think of him. His Faith Foundation is also a joke since its been created for political gain in emerging countries.

This book goes into detail and speculation for many areas of this snake's life. His employees offer no argument or insight the help his cause. He is secretive because he has a lot to lose.

Roger Davis reading of the book is excellent and his impression of TB actually made me grit my teeth in anger. He should play the villain in pantomime.

On a final note, I've actually warmed to Cheri Blair. She appears to be a shrewd character but a fairly honest and reputable business person who looks after her family and their interests. I don't have a problem with people making themselves rich if they do it in the right way.

Tony Blair on the other hand, is paid to offer advice to dictators from public purses. He's a matchmaker for the bad guys and I hope he gets his comeuppance.

Loved it even though it angered me.

What disappointed you about Blair, Inc.?

The book is NOT balanced in any way. It sets out to damn Blair and no matter what, it refuses to do anything but criticise him. That's not to say Blair is an angel - most definitely not. And it's clear that many of his delaings are shady (to say the least!) but that doesnt make his every move a criminal act. A more balanced approach would have made the book far better and highlighted in a far more powerful way the shady, disreputable side of Blair.

Probabaly not - I dont feel their work is balanced. Or even tries to be balanced.

Have you listened to any of Roger Davis’s other performances? How does this one compare?

No - but i was very impressed with his reading of this book.

It's certainly interesting - and certainly uncovers many secrets that should be out in the open. So yes, there is a lot here to commend it and the work of the authors, it's a sahme they let themselves down by twisting the story.

This was an excellent book which certainly exposed a number of contradictions in how Blair likes to portray himself. He seems to be very conflicted in his desire to make money versus his desire to be a respected elder statesman across the world.
In my opinion, he has struck the balance all wrong and has mishandled how he has dealt with criticism. His obsession with secrecy and confidentiality hasn't helped his cause at all and only fuels suspicion in many people's minds.
The only part of the book I thought was unnecessary was when it focusses on some of his friends such as Stephen Byers etc. It felt a bit like the authors were implying guilt by association which whether true or not detracted from their main central argument.
Overall, I thought the authors justified their major arguments and although I have nothing against people making money, you just felt Blair could have gone about it a different way and done some good along the way too.

Like many Labour supporters, I was delighted and full of hope when Blair came to office, sadly, I will never support this party again due to Blair. This book is well researched, shows how this man became the vile, corrupt and greedy, individual he is today, paid vast amounts to support some of the most evil dictators. if you want to understand why he is so disliked, read this.

Before the end of the first chapter I was counting the number of occasions where the authors seemed more interested advancing their apparent view that TB is just an awful human who only seeks to engage in subterfuge and dirty dealings, whilst painting other people who share characteristics as paragons of virtue. The hypocrisy of the mental double standards gets tiring quickly. One example is the description of the former Quartet rep as a 'principled {etc etc} person' who gave up the post for lack of opportunity to engage a political dimension to the role, and then criticizing TB for not pursuing a political dimension to the role, which was, as previously noted, outside the scope of the role... This approach continued, leaving me with the view that the authors are Guardian reading liberals trying to sell books, rather than authors who are seriously interested in presenting unbiased facts and letting the reader decide what they want to think about TB.

Sections were interesting of course, such as how TB has set up his businesses in order to prevent the kind of info disclosure regarding his business affairs. But, given the tenor of the authors and the fact TB is a widely disliked person (by persons who would actually harm him), I don't blame the fellow for taking security seriously. Given that the public has no real right to otherwise know about a private individual's private affairs, and the organisations TB otherwise works for, including the Quartet, are not state institutions that are accountable to democracies, this book is left with little to stand on apart from petty dislike and probably jealousy of a man who has leveraged his experience and contacts to his advantage. So what?

This book is from the same vein of thinking as those who believe all politicians should earn the national average wage, commute on the tube and then retire as Guardian columnists, telling the world how awful wind farms are.

Quote from wikipedia on Francis Beckett:

'Beckett has been described as "an Old Labour romantic" by Guardian associate editor Michael White.[1]'

I bought his 'auto' which was sort of interesting if you happened to live in the UK at the time.
However this 'saga' is as boring as bat !@$^ !!

We all know how this guy behaves , lets just leave it at that !!