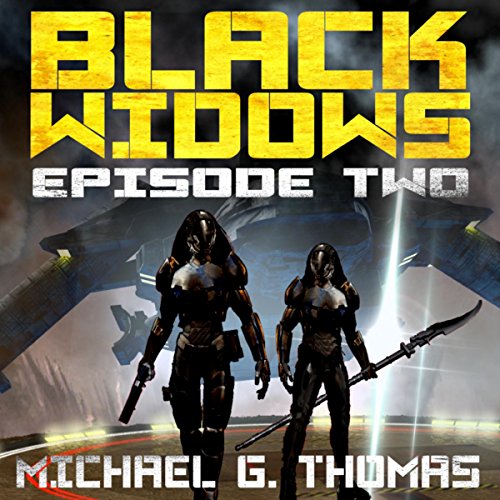 By: Michael G. Thomas
Narrated by: Nancy Peterson
Try for $0.00

Black Widows: Episode 2 is a thrilling science-fiction series about the infamous all-female mercenary unit. Aboard their heavily-armed ship Medusa, they embark on secretive missions throughout the crumbling Confederacy as it wages a terrible and bloody civil war.

The Black Widows head for the massive transport ship MS Monterey, captained by the tough-as-nails Lothar Bartholomew. Following a series of difficult operations, they need to take on supplies and collect payment for a recent contract. While the Widows look forward to some time away from Medusa, Syala has other plans. She is looking for information as she desperately tries to locate her missing sister and the sinister slavers who tore her home apart. What none of them realize is that something left Skylla with them, and now it's on the ship and stalking its prey. As the death count rises, only the Black Widows can save the day, and Syala is caught up right in the middle of it all.

Black Widows is serialized over six short episodes per season, in the same fashion as a TV series. More adventures will be released over coming weeks before being combined into a six-volume compilation.

Great continuation of this sci-fi adventure

I've really enjoyed both books of this series so far, this book kept everything I liked about book one and made it better. The action starts early and continues throughout the entire book. I am enjoying all of the characters that the author has introduced, and it seems like even minor characters have a lot of depth. The characters are all relatable and all act in a believable way. The narrator does another fantastic job here. I really enjoy the way she voices the characters, and I like how she voices the male characters, especially Lothar. So far this series is definitely worth a listen, and I can’t wait for book three.

This audiobook was provided by the narrator at no cost in exchange for an unbiased review.

STORY......
Good story but there was to many characters introduced that were needless. However I do still want to continue with the story.

NARRATOR....
The narrator does a great job of bring life to the characters.

TARGET AUDIENCE: Unsure if this was intended as Adult Genre, or YA, but it would be great as either. This is my first experience in a series set in episodes, and wow it is great. All of the best parts of both a book and a TV series.

PROFANITY, VIOLENCE AND SEX: There is violence, however not horrible. No sex or profanity.

STORY: Science Fiction, where a young girl (Syala) finder herself a member of an all-female mercenary unit. The author is able to provide plenty of twists and turns.

NARRATOR: Excellent narration. Nancy really does a terrific job at bringing the characters alive. Never a problem knowing who is speaking, the prosody and flow of her voice is amazing

OVERALL: Absolutely loved this episode. I can’t wait to listen to more of these. All too often sequels do not meet up to my expectations. Didn’t experience that with this book. The second episode is better than the first.