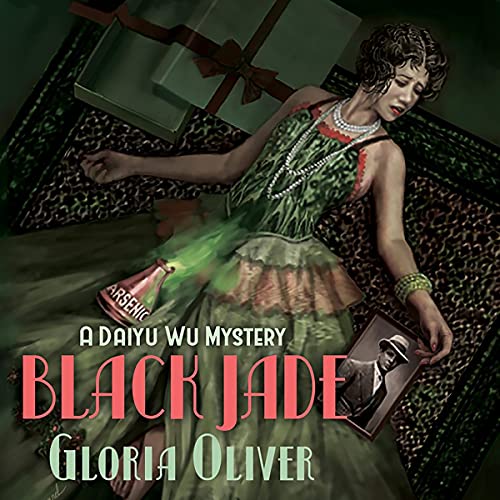 By: Gloria Oliver
Narrated by: Tom Briggs
Try for $0.00

Could an old-fashioned ballgown be used to commit murder?

Daiyu Wu is aware that fear of the Yellow Terror has made her nationality a rare breed in the Lone Star State. Being Chinese and blind makes her doubly unique in 1930 Dallas. Despite these impediments, anyone who dismisses her for either fact does so at their peril.

One day, at her family-owned laundry business, Dai detects the scent of burned garlic. With the help of her companion, Jacques, the source is soon discovered. It is a green ballgown. The gown has money pinned inside it to pay for the cleaning, but oddly, it came with no address label to identify its owner. Her extensive knowledge leads Dai to believe someone has committed murder using arsenic. The perpetrator is trying to use White Laundry to hide the evidence. But no mention of foul play turns up in the newspapers, and there's not enough proof to convince the police there's been a crime.

Her curiosity and intellect stimulated like never before; Dai ignores the possible consequences and sets out to solve the mystery with the help of her canine companion, Prince Razor, and her confidant, Jacques Haskins. It's either that or let the killer get away with it - assuming a spoiled popinjay, his jealous self-appointed girlfriend, and Dai's overprotective parents don't get in her way.

What listeners say about Black Jade

The story is well-paced and uses the time period well. I think you’d be hard-pressed to write a story about arsenic poisoning on a green dress set in the modern era. I appreciate this as it would have been senseless otherwise.

I like the characters in this story. They’re believable, annoying funny, relatable. I could see myself listening to or reading other books in the series just to get to know them more.

It took me a while to get used to the narrator. It sounds like he’s got a mouth full of cotton. It took me longer to be able to speed up the book than normal because I wasn’t able to understand what he was saying. Overall, he did a great job and I found his voice relaxing to listen to. At the end of one chapter, some dialogue is repeated 4 – 5 times. Another time at the start of a chapter, there are audible clicks which are also distracting.

Minor issues with the audiobook version aside; I enjoyed this story very much and recommend it to anybody who likes mysteries or Sherlock Holmes stories.

NOTE: This copy was provided to me free of charge as a digital review copy. The opinions stated in this review are mine and mine alone, I was not paid or requested to give this book a certain rating, suggestion, or approval.