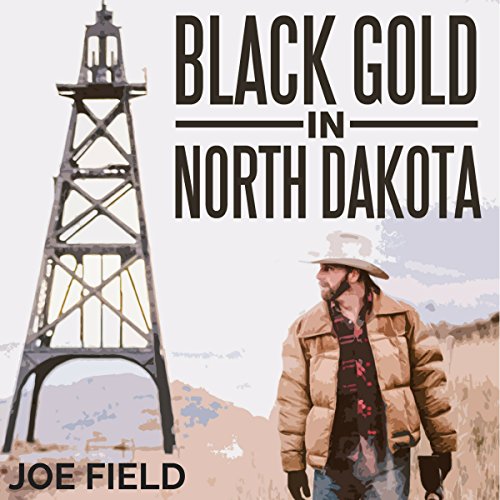 When the granddaughter of a prominent North Dakota state senator goes missing from her hometown of Williston, law enforcement has a couple leads on out-of-state roughneck oil workers – but with the holidays approaching and the trail growing cold, each day that passes decreases the chances that she will ever come home. Reporter Cooper Smith is chasing a story about the Bakken oil industry for Minnesota Public Radio when he learns that the missing woman is his wife’s best friend. Leaving the story behind, he puts his investigative skills to work to help rescue her. His pursuit takes him to the Deep South, where he learns that this may be one story too big for his Northern britches to come back from in one piece.
©2017 Paul Bunyan Publishing (P)2017 Paul Bunyan Publishing

Rather Slow But the Kidnapping Kept My Interest

A prominent politician's granddaughter goes missing, kidnapped by a couple of roughnecks. Those men who are only in North Dakota; semi temporarily to work in the hot oil industry boom.

A mishmash of characters including a journalist, who is married to the best friend of Gabby (kidnap victim) He descends upon the small North Dakota town and with permission of his bosses at NPR he is able to investigate the kidnapping. His wife joins him along the way and they traveled cross-country to try to find Gabby.

This is a standalone book and whilst tying up the loose ends the listener is treated to a political opinion on drilling, fracking and the like. I could've done without that.

The narration was good and as per my preference I sped it up and enjoyed it more.

*I received this book in exchange for my review. I'm happy to open introduced to these new to me authors and performers. I will look for them in the future. Thanks for reading my review. Please vote below if you found it helpful to you. I invite you to follow me on Audible as well – read my latest reviews, vote and share them.

Narration does not much intonation or modulation.

I got a copy of this book via Audiobook Boom in exchange for an honest review.

I didn't read the first book in this series, so I don't have the back story. The story starts out with a young woman being kidnapped by two thugs in the parking lot of the town gym. It's an oil boom town with a high population of roughnecks - what an amazing backdrop for a mystery. So much potential. Then I met Cooper Smith and I was like, "Oh..."

I'm willing to suspend disbelief for a lot of things, but this book was a bit too much. How does a person who works for NPR get a month of vacation time for his honeymoon? Why is the NPR boss such a cranky pants when his workers are doing their jobs well? What police officer will take the word of a man in jail for fighting that he's a credentialed reporter AND let him stay his basement? What police force doesn't make a missing prominent citizen a top priority - especially if her grandpa is a political leader? No police force is going to cut their force back over the holidays. It's one of the most high-crime times of the year. Cooper's whole family are cops. Yet, he completely ignores the direct command of police officers?

I feel like the plot promised a lot, but then I got distracted by the trees and didn't see the forest anymore.

I frankly don't get why Cooper is the hero of this story when his wife kicked a creeper's butt and Gabby has to use her wits to survive a kidnapping. I'd happily read about strong, clever women.

The narrator was pretty wooden and rote - not much intonation or modulation.

I recommend this mystery to everyone. It kept me interested thru out the story. Narration was great. I was given this free review copy audio book at my request and have voluntarily left this review. The fact that I was gifted this book had no influence over my opinion of it.

You have the right to remain silent

When investigative reporter, Cooper Smith, arrives in Dakota in pursuit of a story about the oil industry, he learns of the abduction by a couple of rednecks of Gabby, a member of the City Council, granddaughter of the local and long serving Sensor, and close friend of his new wife. With a storm approaching, the trail is literally going cold as Cooper investigates her disappearance, soon to also be joined by his wife.

In this cleverly constructed story, the reader follows both the initial kidnap of Gabby and the events following it as well as the Smith's investigation and the reactions of the powerful politicians of the state. This is a slow burn thriller with great characterisation, interesting and atmospheric insights into the oil industry and those involved in it as well as a good detective story in it's own right.

The narration by Ward Paxton was very pleasant to hear, pitched perfectly for this book, clear, steady, with good intonation and character voicings. It was easy to believe him to actually be the reporter, Cooper Smith. This is the second in a, so far, short series featuring Cooper but I was unaware of this when I requested, and was freely given by the rights holder, a complimentary copy of Black Gold, via Audiobook Boom. Not having read book one in no way diminished my enjoyment of this second story. It is completely stand alone.

This is a good, solid detective story with complimentary conspiracy thrown into the mix and with very three dimensional, realising characters and without too much overt violence. Recommended.

Really enjoyed this story and the mystery/suspense aspect. It kept me interested all the way through. Narration was fantastic!


I was given this free review copy audiobook at my request and have voluntarily left this review. The fact that I was gifted this book had no influence over my opinion of it.

This is a thriller in which Gabby, the granddaughter of a popular and prominent State senator from Williston, North Dakota, is kidnapped from her local community rec center. Gabby, herself, is an upright and upcoming politician in her own right as a city councillor and is opposed to many aspects of the oil industry. Gabby's college roommate and best friend, Soojin Smith is married to Cooper Smith, a Minnesota Public Radio reporter, and when they learn of Gabby's disappearance they commit to helping find her. The kidnapping and disappearance happens on the eve of a huge snowstorm a few weeks before Christmas. This together with the additional inserted characters of the oil worker roughnecks who did the kidnapping, and the dirty politicians trying to stay abreast and thwart the investigation with the aid of an ex cop PI, sets the stage for a great read. Everything progresses at a reasonable pace, characters are developed well with twists and turns, and enough facts about the Bakken oil industry are used to keep you interested. I would rate this as a solid 4 in all categories.I was given this free review copy audiobook at my request and have voluntarily left this review.

I may have been given a review copy of this audiobook but I swear it is not affecting my review. I thoroughly enjoyed this audiobook. I liked the storyline, the characters and the locations. I especially enjoyed the pace the narrator chose for the narration. Great listen. Hope to run across more Joe Field and Ward Paxton combos.

This is the second book in the Cooper Smith series, and though I have read the first, this book could easily stand alone for those who don't want to start at the beginning. The book started a little slow for my tastes, but it picked up shortly thereafter. It was interesting how the story wove together and spanned different parts of the country. What I really like about this series is that the main characters are good people, and so I don't feel bad for rooting for them (like I do with anti-heroes). I listened to the Audible audio edition of this book narrated by Ward Paxton. At times he came across a little robotic in his reading, but he has a pleasant voice, so it didn't annoy me too much. I was able to get used to his voice pretty easily. Overall, an entertaining mystery. I would continue reading this series.

I saw the title of this audiobook recently and it immediately grabbed my attention. As a life-long resident of South Dakota, I enjoy reading fiction that is set in this area of the country.

This is the second installment in the Cooper Smith series but the first book I've heard. When you start at somewhere other than book one, you run the risk of not getting all of a character's back story or even worse, having the first book spoiled for you. Luckily, I was able to jump in right away and was left wanting to read the first installment as soon as possible.

I was surprised when I started listening and heard a song titled 'Banshee of the Bad Lands' which I have to admit is pretty catchy and fits the story.

The story moves at a brisk pace with not a lot of wasted scenes or moments. Everything had a purpose and I was hooked long before the final car chase.

As for the narration, Ward Paxton has a voice I found oddly familiar. I felt like I had heard it before even though this was the first book I ever heard him narrate. It felt...comfortable. I thought the voices for the different male characters were quite distinct and I could tell which character was speaking without it being pointed out. His female voices could maybe use a little more work but that's okay because I believe that men doing women's voices is quite a difficult skill to master. At least his weren't overly winy like I've heard some other male narrators make the mistake of doing when voicing women.
Other than that, he read at a good ace and did a lot of nice accents.

I will definitely go back to the first book in the series and look forward to hearing more from both author and narrator. The only drawback is now I have a vicious craving for 1919 root beer that is likely to go unsatisfied for the near future.

Reporter Smith Gets a Major Story

I very much enjoyed this story about the hellraisers working in the Bakken oil fields of North Dakota where reporter Cooper Smith and his wife are drawn into a kidnapping case. The author does a great job of capturing the feel of small town America hit with disturbing crime. The narrator is excellent, well matched for the story and characters.