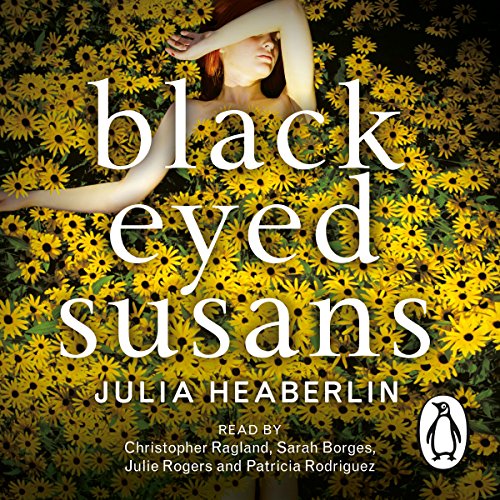 Seventeen-year-old Tessa, dubbed a 'Black-Eyed Susan' by the media, became famous for being the only victim to survive the vicious attack of a serial killer. Her testimony helped to put a dangerous criminal behind bars - or so she thought.

Now, decades later, the black-eyed susans planted outside Tessa's bedroom window seem to be a message from a killer who should be safely in prison. Haunted by fragmented memories of the night she was attacked and terrified for her own teenage daughter's safety, can Tessa uncover the truth about the killer before it's too late?

Where does Black Eyed Susans rank among all the audiobooks you’ve listened to so far?

Amongst the top handful

The story was constructed beautifully, the suspense lasted, the twists were beautiful, and so well read.

I am not completely convinced of the ending, it felt rushed that then I also hate it when a good book ends - so maybe its me not the book!

I picked this title up from an Audible recommendation. Not my usual sort of listen but entertaining nonetheless.
The characters are well portrayed and the "truth" doesn't become clear until the very end.
I found this story a bit disjointed in places but overall an entertaining piece.

This is in my top 25% of Audible books. The story held my interest. The perspective changes character and jumps backwards and forwards in time just a little too often for me and I found that a distraction from the plot.
There are a number of narrators. A couple of them grated and I had to work to focus on the story rather than the somewhat OTT accents and inflections. The odd use of words (most notably 'digger' for spade) had me on an odd trajectory a few times, but perhaps that's my fault for being English. Do they really call windows 'winders' in the US?

Loved this! everything about it was brilliant. great narrative, excellent story line, couldn't stop listening to it. going to listen to it again!!

Original -not your typical who done it

very enjoyable. Good story well read.
The story is told by going back and forth between past and present and we hear from different characters too. This adds interest and ensures everything feel dynamic.
I liked all of the narrators.
Good story with some mystery but without being a typical 'who done it', much more original

I heard this book being reviewed on the Simon Mayo show on BBC Radio Two and also looked at reviews on Audible. Somebody compared the book to the brilliance and suspense of Silence of the Lambs and there were other great things said. Well, I just don't get it, I thought it was terribly boring and barely managed to finish it. The characters aren't particularly likable or interesting and nothing grabbed me. I didn't find it had suspense at all because I didn't care who the murderer was or what happened, apart from what happened to Terrell perhaps. Very disappointed.

Wish I had the film rights !

Unfortunately this book left me a little underwhelmed. It was too long, and the jumping back and forward every alternate chapter was annoying and confusing. I persevered, despite almost throwing the towel in on numerous occasions, thinking that the ending would be worth it.... It wasn't. It was entirely predictable and painfully drawn out. Definitely not my favourite Audible listen. I wouldn't recommend.

Loved the story and brilliant writing.
Had a little issue with jumping back and forth to different times.
But a brilliant read and a must for any adult reader.

What did you like most about Black Eyed Susans?

The storey stood on its own feet, was a bit long winded before reaching its climatic end. The characters were plausible, and I grew affection for most of them. The back drop is quite disturbing but that is hardly touched on as you spend your time living in the tormented mind of Tessie/Tessa. Overall, 7/10

If you’ve listened to books by Julia Heaberlin before, how does this one compare?

I haven't but I will keep an ear out for her

Tessie as a teenager and Tessa as the tormented adult

Not particularly, I consider being moved by something emotional in a beautiful way. As I've said the back drop to this storey is quite disturbing.

Don't let anyone tell you its like Girl on a Train (a fabulous book). This book deserves to be considered on its own merit, but it didn't blow my mind like some of my recent books.

An excellently crafted storyline. The narration suits it perfectly and the result is utterly compelling.

Excellent story with a great result

This book is very engaging - told by the same character in both her present day state, and when she was a teenager. A very clever story with a very satisfying ending.

Very well narrated and the production is great.

Great to listen to as the voices an their accents, really set you in the south.