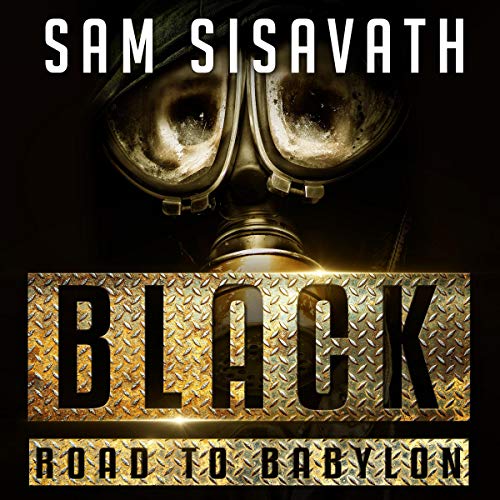 By: Sam Sisavath
Narrated by: Lauren Ezzo
Try for $0.00

The long night is upon them.

After five years of hard work, dedication, and too many sacrifices, Lara thought she had made progress in bringing what remained of humanity together in her small part of the world. She also thought they had seen the last of the ghouls as a major threat.

She was wrong on both counts.

An unnatural alliance between two enemies, forged in secrecy, has finally been revealed. With Keo away on a mission, the real threat is at the gates, leaving Lara, Gaby, and a city full of civilians unprepared for a long and relentless night of fighting.

The survivors thought the worst of times were behind them, but they were mistaken. Fenton was always just another front in a secret war that Gaby and Lara didn’t know they were still fighting. Before the night is over, they will discover that the only thing more powerful than hope is vengeance.

In Black, the fifth book in the Road to Babylon series, it’s all-out war, and no one will be safe.

What listeners say about Black

So the issue is not really the story but the narrator. Whenever she portrays Gabby, it sounds like she’s about to cry. It sounds like Gabby is a weak and scared child which isn’t the case. The same can be said for several other female characters. So quivering your voice and speak firmly like they’re meant to be portrayed. Also, she literally squeals many times after a large explosion in the story. It’s almost unbearable with headphones. Fair warning. Kinda stinks that I am so invested in the story that I have to listen. Please do better guys.

This series has me spending to much money

After the last book that was basically exclusively about Keo I was excited to start on Black hoping to get some more Keo action; However that is the exact opposite of what I got, which is basically just a bunch of Gaby. Turns out with a few awesome supporting characters she can carry a whole novel! Not was I was prepared for but what I needed

Best PA series out there!

Sam Sisavath's PURGE series and spin-offs are an automatic 1-click for me. Outstanding world development, characters who feel real, and danger that never ends. I re-read the books and re-listen to the audio over and over. A+ experience for readers.

It's LARA not LAURA

The entire audiobook the Narrator Lauren pronounced Laras name - as Laura. It's always been Lara.
No check on that?
Why switch up the Narrator for this book? Ryan does such a good job.
You switched back to him in Book 6. Is it because it was a near all female storyline with Gabby and Lara?
So confusing on listeners when this happens, and real bad on the pronunciation name of a lead Protagonist..

I really liked the way the story was narrated..Lauren was the best in doing Gabby..excellent story

OMG, enough with the sound effects.

I really like the babylon books. This is my least favorite, but the sound effects pushed me over the edge. between "bang bang bang" over and over and "squeeeel" ear ringing. Ive had to fast forward countless times in this book. annoying repetition is never good. lets hope it doesnt continue with the next book. ill get my credit back before i do that again.