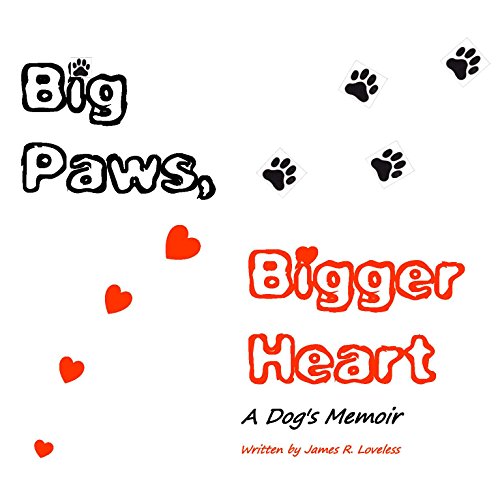 Once in a lifetime a person may find the perfect dog, but to have two perfect dogs in a lifetime is practically unheard of. Big Paws, Bigger Heart presents a story of that improbable situation as told by Finley, a Belgian Tervuren dog who came into the life of his adopted dad, Jim Loveless, to fill the enormous void left behind by the loss of Jim's first dog, Brooks. Finley goes back in time to tell the legend of Brooks. He shares the heartwarming and often humorous tales of how Brooks shaped the lives of not only his owner but of a community by proving faithfulness meant more than championships. Part one of this true and inspiring story follows Brooks from his early days of fitting in with his newly adopted family until his forced retirement from the agility competition he and Jim so dearly loved due to bad hips. With the loss of Brooks, Jim couldn't imagine that the void left behind could ever be filled. The sequel, however, recalls how Finley came along, picking up where Brooks left off. He exceeded Jim's wildest expectations with his loyalty and unbelievable sense of humor. Written from a dog's perspective, Big Paws, Bigger Heart explores the love that dogs can bring into our lives and shows how two dogs changed one man's life.

What did you love best about Big Paws, Bigger Heart: A Dog's Memoir?

Writing a book from a dog's perspective, what a great idea. The ups and downs gave the book dimension and kept your interest chapter after chapter.

What about A. T. Al Benelli’s performance did you like?

His performance was awesome, his voice rendering added so much, it made the book come alive, you feel like you are right there living the moment.

Enjoyed the audible & book immensely, it will make a great gift.

Where does Big Paws, Bigger Heart: A Dog's Memoir rank among all the audiobooks you’ve listened to so far?

Jim,because he loved his dog the way I love mine.Dogs are our family and Jim proves this in the book.

He did a great job telling the story by Finnly.He sounded like a dog should sound if one could talk

I loved the way Brooks knew from the first time he laid eyes on Jim that he knew this was his person.

I highly recommend this book for all people who ever loved a dog.

Where does Big Paws, Bigger Heart: A Dog's Memoir rank among all the audiobooks you’ve listened to so far?

Finley... the dog telling the story! He sees the family, the friends and the other animals through the eyes and ears of the family dog... beyond cute... a whole new perspective! Finally a dog who tells the story of his owners... not the other way around

The "personalities" of the characters... even down to the dogs in the ring! It seemed like everyone got their own voice, making the performance totally "full" and through the sounds and affectations of their voices I got a clear "picture" in my head of the characters in the book. It was like when I was a little kid, long ago, listening to the radio with my grandparents on Sunday nights. "Theatre of the Mind" was my favorite. It was like that!

This is the fifth book narrated by Al Benelli that I've listened to. He seems to get hooked up with really creative and talented new authors and the collaboration is an enjoyable product that hasn't hit the bestseller's list yet... but should shortly!