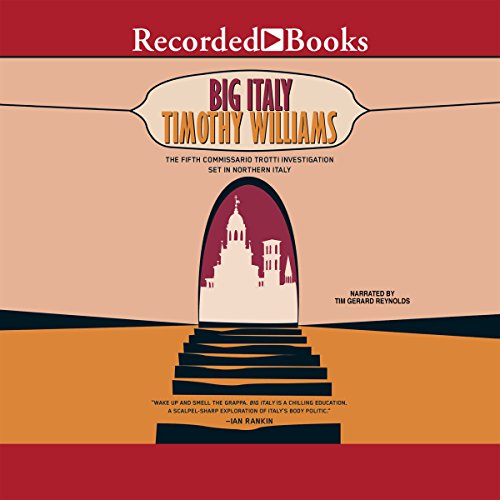 By: Timothy Williams
Narrated by: Tim Gerard Reynolds
Try for $0.00

After what seems like several lifetimes as a policeman, Commissario Trotti can't wait to retire to the villa he jointly owns with his cousin, where his biggest concern will be keeping track of his chickens. But things keep getting in the way of his plans. Like Fabrizio Bassi, for instance.

With his camel-hair coat and sallow complexion, Bassi is notorious - he was on the Polizia di Stato for 10 years before being dismissed and setting up his own detective agency. The last thing a cop with retirement in mind wants is to be associated with a seedy PI - especially one with a bee in his bonnet about a murdered doctor and a conspiracy theory to match.

So what if someone wants Bassi dead? Despite his many enemies, he's lasted this long.... And amid all of this chaos, Trotti's boss wants him to head up a child abuse unit. Big Italy is a rich, ambiguous mystery of politics, corruption, love - and death.

What listeners say about Big Italy

NOT a stand alone!

Frankly, I would recommend this one only for Trotti fans. I found it highly confusing, as it's more a collection of subplots (threads) than a specific narrative. I'm not an Italophile, so in addition to keeping track of which plot we were dealing with in each chapter, I found it tough to keep track of the characters. Narration was a bit of a challenge for me, as there were voices for each person, but they were done in a sort of "hard boiled" English manner, which sometimes slightly distracted me from the fact that these are Italian characters.

I normally love crime stories, and in particular those set in Italy, but not this one. I had to keep pushing on in order to finish it. The story is repetitive and very predictable. Just don't bother.