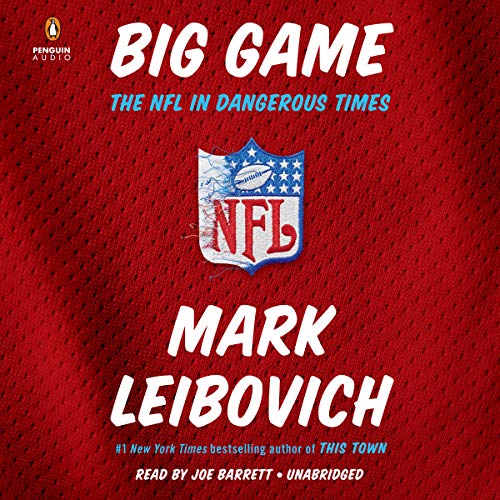 From the number one New York Times best-selling author of This Town, an equally merciless probing of America's biggest cultural force, pro football, at a moment of peak success and high anxiety

Like millions of Americans, Mark Leibovich has spent more of his life tuned in to pro football than he'd care to admit. Being a lifelong New England Patriots fan meant growing up on a steady diet of lovable loserdom. That is until the Tom Brady/Bill Belichick era made the Pats the most ruthlessly efficient and polarizing sports dynasty of the modern NFL, and its fans the most irritating in all of Pigskin America. Leibovich kept his obsession quiet, making a nice career for himself covering that other playground for rich and overgrown children, American politics. Still, every now and then Leibovich would reach out to Tom Brady to gauge his willingness to subject himself to a profile. He figured that the chances of Brady agreeing were a Hail Mary at best, but Brady returned Mark's call in summer 2014 and kept on returning his calls through epic Patriots Super Bowl victory and defeat, and a scandal involving Brady - Deflategate - whose grip on sports media was as profound as its true significance was ridiculous.

So began a four-year odyssey that took Mark Leibovich deeper inside the NFL than anyone has gone before. From the owners' meeting to the draft to the sidelines of crucial games, he takes in the show at the elbow of everyone from Brady to big-name owners to the cordially despised NFL commissioner, Roger Goodell. Ultimately, Big Game is a chronicle of "peak football" - the high point of the sport's economic success and cultural dominance but also the time when the dark side began to show. It is an era of explosive revenue growth but also one of creeping existential fear. Players have long joked that NFL stands for "not for long", but as the true impact of concussions becomes inescapable background noise, it's increasingly difficult to enjoy the simple glory of football without the buzzkill of its obvious consequences.

And that was before Donald Trump. In 2016, Mark's day job caught up with him, and the NFL slammed headlong into America's culture wars. Big Game is a journey through an epic storm. Through it all, Leibovich always keeps one eye on Tom Brady and his beloved Patriots, through to the 2018 Super Bowl. Pro football, this hilarious and enthralling book proves, may not be the sport America needs, but it is most definitely the sport we deserve.

One of Mother Jones’ Favorite Nonfiction Books of 2018

“A raucous, smash-mouth, first-person takedown of the National Football League, it is also the story of an aging fanboy whose reportorial eye and ear are far too acute to ignore what’s wrong with the game and the team he loves.... Mr. Leibovich understands that humor - bruising, black-and-blue humor - is the best way to attack the self-seriousness and grandiosity of the NFL. It works as well for him as it did for his comically insurgent predecessors - Dan Jenkins in Semi-Tough and Peter Gent in North Dallas Forty - making Big Game an instant classic in the pigskin oeuvre.” (Wall Street Journal)

“What we have here are 349 unflinching pages detailing the NFL’s rampant boobery.... It probably took a reporter like Leibovich to write a historic book like this. A top-flight journalist who’d gorged on a product for decades parachutes into the factory to see exactly how the product is made and who’s making it. The findings are mind-numbing, stomach-turning, and stupefying. But the product is still so delicious.” (NBCSports.com)

“The high point of any monster movie, whether you’re talking 'King Kong' or 'Jurassic Park', comes at the moment when you finally get a full view of the giant beast. You’ve caught a glimpse or two, heard a roar in the distance, but when you finally see the monster’s full immensity, it’s a sight to behold...and you wonder how in the hell your little heroes are going to survive its fury. Big Game: The NFL in Dangerous Times, an exceptional new behind-the-scenes book by Mark Leibovich, is a monster movie disguised as investigative journalism. Running from 2014 right on up to this year, Leibovich’s narrative presents the NFL’s owners and commissioner in all their bumbling, well-meaning, self-serving, self-satisfied glory...and shows in high definition how unprepared they were for the monster that stomped in to demolish everything they hold dear.” (Yahoo Sports)

What listeners say about Big Game

I did not learn anything new in this book or really interesting at all. I enjoy hearing stories about pro sports, but this was basically everything that was already reported.

Great look into the NFL

I enjoyed this book very much, some of the accents used by the reader weren’t very good. I would have just suggested he read in his normal tone.

A Peek Behind the Curtain

This ended up being a better book than I thought. It's a gentle skewering of the Football Industrial Complex by a fan who was granted insider access to write this book. Mark Leibovich is a political writer by trade and his style -- observation with biting wit -- suits the subject matter of today’s NFL. The narrator really gets this and delivers.

You'll see the hubris of the ownership. (What is it about sports owners?!) Jerry Jones makes quite an impression, drunk on booze and pride. So does Robert Kraft, from normal rich guy upon entering the league to self-important rich guy today. Roger Goodell comes off as a less than sympathetic character, sometimes the orchestrator of his own demise. Tom Brady, who can be both thoughtful and vacuous, has football and everything else is a distant second, if there really is anything else.

Deflategate is covered, as is the major problem of CTE and concussions -- an existential crisis for the NFL. Some in the league denying the effects of head trauma are reminiscent of the Soviets denying that Chernobyl's exploding reactor was an emergency. Also making an appearance are players kneeling during the National Anthem and the league’s hamfisted way of dealing with it. And then there are the NFL "nugget chasers" -- the names you know well in media who spend all their time tweeting bits of trivial league info to the masses. What a life. What a sausage factory.

The author is a Patriots fan (by birthright), and while the Patriots get a lot of ink it isn't the egregiously fanboy type. The NFL could stand to take itself a lot less seriously. But being a billion dollar industry there’s a lot riding on the facade created by NFL Films that it’s a glorious and righteous endeavor, rather than a brutal game that chews up and then spits out young men while the overseeers make much bigger bank.

Really good inside dope on Patriots and Tom Brady.

Also good on the gritty and notsopretty business of football. Who knew how much the loyaly fans pay to support a stadium and a team and how cavalierly they can be abandoned by owners looking for a better media market.

Entertainment for a non-sports fan!

Even though I hardly ever watch a football game I found this book highly entertaining and amusing, thanks to the author's insights and his skilled reading.

If you’re a Patriots Fan

Sort of a historical summary of the last few years of the NFL from the perspective of a Pats fan than a critical look at the NFL’s problems. Yes the issues are written about but more like a news report.

First time I have ever criticized a narrator, but this was absolutely the wrong choice. Anyone who has ever heard an interview with Leibovich knows he drips with sarcasm, disdain, and irony - so they got the most earnest narrator possible for his book, who just reads its straight off he page. Very disappointing, Leibovich should have read.

Not exactly what I expected, but an ok listen

Was interesting but seemed more about the authors relationship with Tom Brady and the Patriots.

Gives us a peek behind the curtain of the NFL, told with a love of the game and a disdain for the league. Mostly about football as a business, with a lot of time spent on Tom Brady. A lot like This Town, a book on the Washington D.C. political scene by the same author. Except the author loves football while thinking much less of D.C. The same narrator for both books too, which is great because he performs with a dry humor and deep sarcasm befitting the subject.