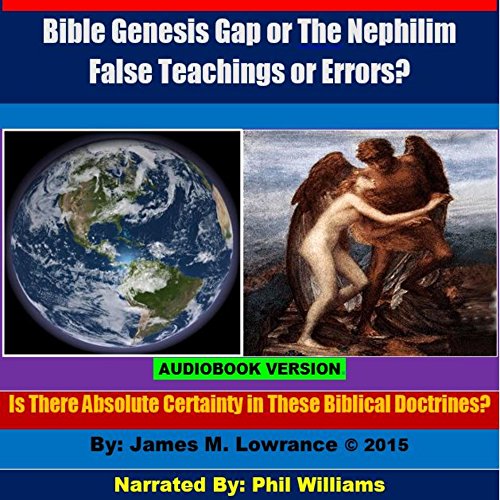 Bible Genesis Gap or The Nephilim False Teachings or Errors?

By: James M. Lowrance
Narrated by: Phil Williams
Try for $0.00

Stated simply, the Genesis Gap is the belief that angels rebelled against God at a time not revealed but that was obviously previous to Adam and Eve, who were given dominion of the Earth after it was destroyed by God and recreated. This is why we see a finished heaven and Earth in Genesis 1:1, followed by an Earth that is covered by darkness and a catastrophic flood of water in verse two. The teaching postulates that angels may have actually inhabited the Earth (Jude 1:6) and that they had some type of kingdom over which Lucifer ruled.

"In the beginning God created the heaven and the earth. And [can be translated as "but"] the earth was [can mean "became"] without form and void; and darkness was upon the face of the deep. And the Spirit of God moved upon the face of the waters." (Genesis 1:1-2 - words within brackets were added by me)

"And the angels which kept not their first estate, but [left their own habitation], he hath reserved in everlasting chains under darkness unto the judgment of the great day." (Jude 1:6 - brackets were added by me)

What believers in the Nephilim say (belief in an interbred race of angel-men) is that the scripture in 2 Peter 2:4 stating that "angels sinned and were cast into hell" (past tense) is actually talking about fallen angels and human women creating a race of mixed angels and men. Their belief in this doctrine is almost exclusively based on a scripture passage in the book of Genesis, which reads as follows.

"And it came to pass, when men began to multiply on the face of the earth, and daughters were born unto them, That the sons of God saw the daughters of men that they were fair; and they took them wives of all which they chose.... There were giants in the earth in those days...." (Gen. 6:1-4, quoted in part)

In this audiobook further discussion on both topics is offered.

What listeners say about Bible Genesis Gap or The Nephilim False Teachings or Errors?

The author presented a wonderful rudimentary teaching of the Genesis Gap. Provided sufficient scriptural information for the curiosity of any level student of the Bible. The author politely and lovingly provokes one to study and learn of the pre-Adamic time.

I strongly believe that this author could have written this book on a much deeper level; but, I am greatful for his modest way of teaching.