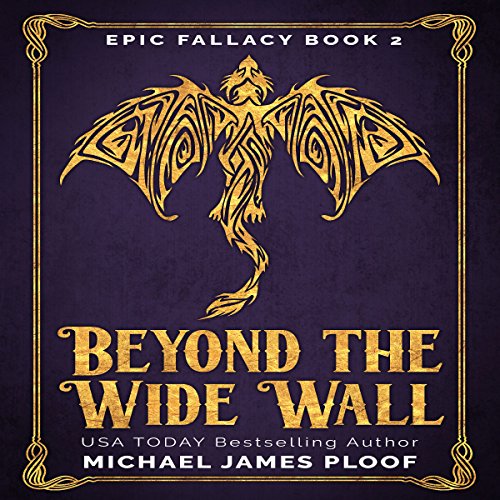 Beyond the Wide Wall

The Champions of the Dragon have survived the darklings, bandits, flocks of harpies, cyclopes, and have finally reached the Wide Wall; now the hard part begins.

Murland and the companions must now travel west beyond the Wide Wall, through the Forest of the Dead, past the Swamp of Doom, over the Horrible Hills, across the Long Sand, all the way to the shadowy peak of Bad Mountain. For Drak'Noir awaits her sacrifice.

Taken prisoner by the fearless Captain McArgh, Princess Caressa, Valkimir, Hagus, and Dingleberry are traveling farther away from the champions with every passing minute. If they cannot figure out a way to escape, they will never reach the champions in time to deliver their shocking message. Meanwhile, Kazimir plays a dangerous game with Zuul, the Dark Lord reborn, and Headmaster Zorromon the Off-White sets out to save Murland from a fool's fate.

Beyond the Wide Wall, book two of Epic Fallacy, is a satirical high-adventure romp through the fantasy genre in the tradition of Terry Pratchett’s Discworld series. From USA Today best-selling author Michael James Ploof.

What listeners say about Beyond the Wide Wall