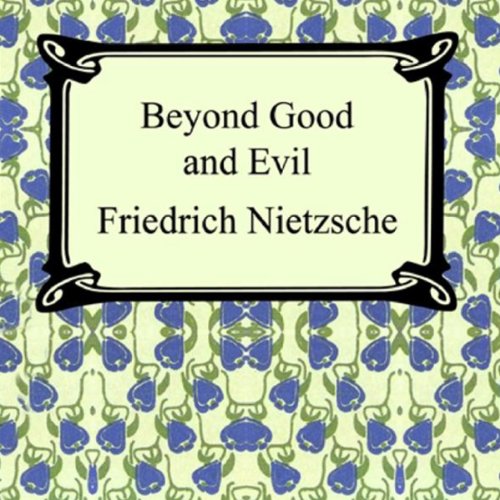 Beyond Good and Evil

By: Friedrich Nietzsche
Narrated by: Steven Van Doren
Try for $0.00

In Beyond Good and Evil, Friedrich Nietzsche attacks past philosophers for their alleged lack of critical sense and their blind acceptance of Christian premises in their consideration of morality. The work moves into the realm "beyond good and evil" in the sense of leaving behind the traditional morality, which Nietzsche subjects to a destructive critique, in favor of what he regards as an affirmative approach that fearlessly confronts the contextual nature of knowledge and the perilous condition of the modern individual.

This is a major work by the philosopher Friedrich Nietzsche, whose writings have been deeply influential on subsequent generations of philosophers.

What listeners say about Beyond Good and Evil

one of the best.

Wether or not you agree with the topic is not what I am rating. Some of Freds ideas are violently original. What I will say is that the narrator has a great pace and his voice is easy to listen too. The author does the topics justice and explains some philosophical ideas well without over simplification. This is not philosophy for dummies but at the same time its not Being and Time. Nice middle ground. If your a fan of the Freddy N. then yo will enjoy.

excellent book with a narration to match!

definitely a worthy read of Nietzsche's! would suggest it to anyone looking for an all-encompassing introduction to his work.

Ol' Friedrich was a man of his times, and often he reads as an jilted misanthrope doing his best to remain misunderstood.

But, please, don't have this stop you from reading Beyond Good and Evil. Yhe language is often sublime and it holds wisdom, insights and questions of deep relevance to our modern, technological, infected lives and our struggles with our world. With what do we replace the lie of Christian morality? Nihilism? What are the mechanics and nature of Will? What is the value of Truth?

Sometimes there's even inklings of answers.

greatness..absolutely great. one of my favorite of neitchze . a verbal assassin . . .

It was always the liking of an individual that was the best part. After attaining and perhaps living/loving with the individual of once consumed affection, the once volatile liking stage had more weight..... Before the fish was caught, the passion of the worm ensnared those not careful enough.....

without trying to listen to a book with 4 different languages and only a handful of translations being included. great otherwise.

Im french canadian and everytime they spoke french I rolled my eyes cause of the pretentious and "royal" toned they used.
The book is way too long for way too little quality content.

I’m a casual reader not a philosophy major fluent in 5 languages. Save yourself the time. Read a book explaining this one instead.

Want to start reading philosophy? This is the one.

One of the things the that struck me most when he analyze the society at when this one was written in 1880s was that it fits so well into todays and previous years division between people class and identity. About how the mediocre class moralists sits on high horses and tell the peasants that they are evil and that they stand for goodness while they break their on morals of goodness in a socialist woke way. About other people who sees themself as superior over others in a fascist way. This was before we got to see the results of such peoples ruling.