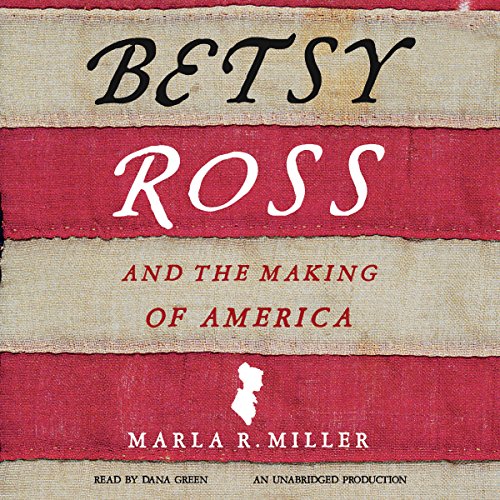 Betsy Ross and the Making of America

Legend has it that as the American colonies hurtled toward independence, representatives of the Continental Congress, including George Washington, walked into Betsy Ross’s Philadelphia upholstery shop and commissioned the first flag of the Revolutionary nation. Although this story has long made Betsy Ross one of America’s most celebrated patriots, little had been known until now about the woman behind the flag.

Drawing on new sources and bringing a fresh, keen eye to the fabled creator of "the first flag", Marla R. Miller thoroughly reconstructs the life behind the legend. This authoritative and thoughtful work provides a close look at the famous seamstress, and along the way delivers an epic depiction of the tensions that animated life in Revolutionary Philadelphia. At the same time, Miller casts new light on the lives of the hardworking artisan families who peopled the young nation and crafted its furniture, clothing, ships, and homes.

This history of the ordinary craftspeople of the Revolutionary War and their most famous representative will be the definitive volume for years to come.

"This first-rate biography of Ross (1752-1836) is authoritative and engrossing and goes a long way toward recovering the history of early American women and work." (Publishers Weekly)

What listeners say about Betsy Ross and the Making of America

More than just a biography this books give a complete picture into, not only the life and times of Betsy Ross, but a complete picture of what life was like during her lifetime. The author includes an amazing amount of detail on members of the family going back many generations. She also described in detail the trades of the time, what it was like to walk the streets, the political feelings, the Quaker faith, architecture and so on in such detail that it give you probably one of the most complete works on 18th century history I've ever read (or listened to). The one draw back is that you have to listen intently as she talks about family members- for the simple fact there are many of them and they come and go throughout the story.

I was prepared for this book because I knew that there is very little historical information about Betsy Ross and her making of the flag. BUt I enjoy history and I thought this was a good story of the history of her family and life in Philadelphia at the time.