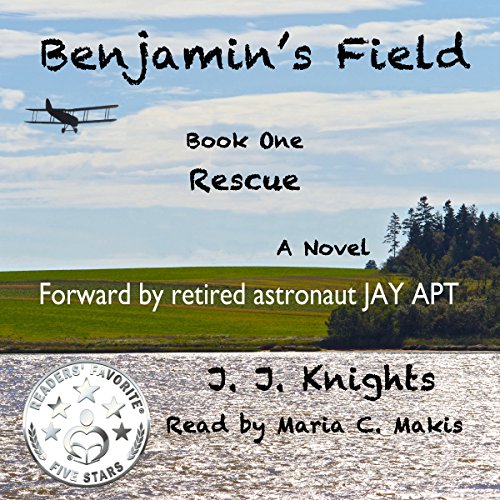 Benjamin's Field: Rescue has been awarded a five-star review by the literary site 'Reader's Favorite' (readersfavorite.com).

The year is 1918 and the world is mired in the 'Great War.' Benjamin Kyner, a poor farmer from rural Pennsylvania who is reeling from a father's worst nightmare, discovers his son's fiancé, Eleanor, has given birth to their disabled child and has been disowned by her parents. Amid the turmoil of war and a world ravaged by the worst epidemic since the Black Plague, Benjamin finds himself crippled by his own self-doubt as he struggles with the overwhelming implications of accepting Eleanor and his disabled grandchild. If he fails, he will lose his last remaining chance at happiness. Fighting for Eleanor are Father James Templeman, who, torn between his humanity and his Church, is struggling with a tragic secret, and Randy Bridgewater, a playboy-turned-fighter pilot, who is sinking into the depths of alcoholism as he fights his own demons of guilt. In the background is Hiram Bolt, Benjamin's gentle farmhand, descended from slaves, who strives to hold them all together in a world that has seen far too much pain and suffering.

The "Benjamin's Field" trilogy follows a family over the course of 60 years through war, peace, triumph, tragedy, heartbreak, and final happiness from the viewpoint of its youngest member, Jeremy Kyner. More a philosophical treatment of the human condition than a mere fictional story, the "Benjamin's Field" trilogy is an interwoven tapestry of parables that explore various aspects of human existence, such as the role of family loyalty versus individual need, personal liberty and how it relates to society's demands, religious prejudice, racism, intolerance, the role of charity, and the overwhelming need for humans to forgive one another.

Sees from both sides

The audible summary says it all. There is not need for me to repeat the synopsis. I thoroughly enjoyed this book and look forward to listening to more of this series. I have never read/ listened to any other books by this author, but would happily do so.

I think all aspects of this story were adeptly portrayed- from the descriptions of the war and air battles, to the difficulties and reasons Benjamin had with accepting his grandson, to the opinions of the priest and Benjamin on the Christian church versus Freemasonry. The story had me laughing, thinking, crying and rejoicing along with the characters.
The book ends at a point that is obvious there is another book to follow.

This is the first book I’ve listened to by this narrator. She did well brining the characters to life, personalities and all. She read with good cadence, diction, and expression. I’ve learned the joys of listening at 1.25 times speed and this book lends itself well to this due to the slower narration pace.

There are no explicit sex scenes or excessive violence or swearing.

This thoughtful and moving story is enhanced by the vivid narration which captures each character with an appropriate and distinct voice. Even the inner thoughts are carefully crafted. I highly recommend this book and am looking forward to part two.

Not My Cup Of Tea

I have two comments about this book. 1. I have never understood how pride will keep a mother from doing everything possible to help her child. She said she prays for a solution when God has not just provided her with one but two solutions. Her parents and Randy. I would never let pride get in the way of helping my son. 2. I hate cliffhangers. "I was given this free review copy audiobook at my request, via Audiobook Boom, and have voluntarily left this review."

If you could sum up Benjamin's Field: Rescue in three words, what would they be?

Benjamin's Field: Rescue started off fairly slow. I found it difficult to understand or sympathize with Benjamin's dispute with the local priest over the conflict between the Catholic Church and Freemasonry, and to be honest, the amount of profanity was off-putting. But I'm glad I stuck with it. The tension rose slowly and my interest grew along with it. By the point of a certain tragic event about halfway through the story, I was invested enough that I started crying, and from then on I was hooked. I definitely want to finish this trilogy.

I really enjoyed the transformation in the main character, accomplished through believable circumstances and steady revelations about himself and others.

Have you listened to any of Maria C. Makis’s other performances before? How does this one compare?

I have not heard any of the narrator's other performances before this. Overall she did a good job. I did notice a few little production problems here and there--ambient noise or equipment noise, perhaps. But it was not enough to detract from the entire production. I was more annoyed by Makis's pronunciation of the name of Benjamin's wife. Was it Delilah or Delinah? That was the only reason for four stars instead of five.

If you could rename Benjamin's Field: Rescue, what would you call it?

The name of this book fit it perfectly, but if I had to choose a different title I might go with something like, "Regret and Redemption."