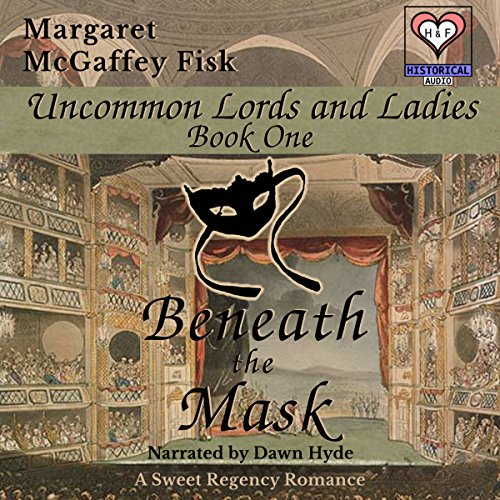 By: Margaret McGaffey Fisk
Narrated by: Dawn Hyde
Try for $0.00

In the flash and glitter of the Regency Era, a young noblewoman craves to dance not in the ballroom but on stage, blending music, movement, and soul. Will these scandalous dreams destroy her family, or gain her a loving patron? Lady Daphne's duty as daughter to the impoverished Earl of Scarborough is to be chaste and pretty. Instead, she dreams of being a professional dancer at a time when stage performers are considered little better than harlots. Talent and determination compel her, but discovery would cost her the wealthy husband her parents have under negotiation and ruin her family.

Baron Jasper Pendleton has learned love does not exist from suffering his parents' barely civil marriage. He plans to accept the bride his ambitious mother secured, get her with child, and go his own way, confident there is nothing to be had beyond momentary pleasure. But when a masked dancer's passion inflames his frozen heart, will he follow convention or risk everything to take a chance on love?

What listeners say about Beneath the Mask

I don't read 'romance' novels. Not if I can help it. But I consider Margaret McGaffey Fisk to be my friend so I felt I should try. I knew I couldn't go wrong with her writing. I don't think I saw a passive sentence anywhere in the book. This reading comes close after I read of Pride and Prejudice. If this were to be a contest, this would win heads down!

Passion is what wins it for me. No! Not that kind of passion! I mean the passion this young girl had pursued since she was small. But, now that she was to be presented as a woman... She wants to dance, something frowned upon back in those days.

Dawn Hyde, narrator of the Audible version of the book made this book so beautiful! Her accents and voice changes helped keep the characters separated and unique. I look forward to reading more with her voice.

Okay, for the romanticohics, there is romance in the end, but most of it is this girl coming of age and her trying to live out her passions, somehow. It makes me sad to know women of the past weren't encouraged to follow their hearts and passions. When I start feeling like we've made no forward motion in the feminist movement, reading something like this shows we have made some progress.

I am looking forward to more by Margaret McGaffey Fisk!

A short story disguised as a novel

What would have made Beneath the Mask better?

The problem was that the H/H did not actually meet until approx. 4:30 hours into the 7:46 hour story. This left very little time to get to know them together. The hero does not make any real appearance until hour 4 and most of the interaction is with him and his friend Aubrey. The reader gets a better understanding of the two friend's relationship , instead of the H/H.

What could Margaret McGaffey Fisk have done to make this a more enjoyable book for you?

I don't think this author is a good writer. There was a lot of opportunity to be drawn into the lives of the heroine and her sister, but a lot of time is taken up with rides in hacks/carriages and what people are eating. There are a lot of little details that are written into the story that give no added understanding. For example, there is a scene where the heroine slams down a hair brush, almost smashing a hand mirror given to her by her grandmother. Why this detail, as we never know about a grandmother and the mirror does not need this kind of detail as it is a very minor occurance.
There was a lot of waste, especially regarding the sister Grace. We never get to know her, so when she runs away, there is no emotional connection...and we never get to know the man she ran away with to cheer for them.

Would you be willing to try another one of Dawn Hyde’s performances?

I don't mind Dawn Hyde. I have heard her in the Sheik -retold. She is not my favorite, but It's not a deal breaker.

If you could play editor, what scene or scenes would you have cut from Beneath the Mask?

If the first 3 and a half hours were cut and the story made some sense, or had emotional resonance, then it would have been better.
The scenes where the heroine is flirting with the coachman , Willam were taken out it might have been logical. The fact that the interaction with the coachman had more detail and sweetness ( it was quite romantic, when he said he loved her, but that he would go on to find someone else), made her ending up with another man seem anticlimactic.

I really did not understand the H/H. The part that really got me was after the hero saw the heroine dancing he says " Iunderstand her better than I understand any woman before her" * or something close. I am a dancer and have watched other dancers and this has never happened. When you dance you are playing a part, as it's a performance. He loved the act and there weren't enough scenes of them together to make the love believable. I know some reality has to be suspended, but emotional development can't be skipped.
The author was very lazy in her writing style .