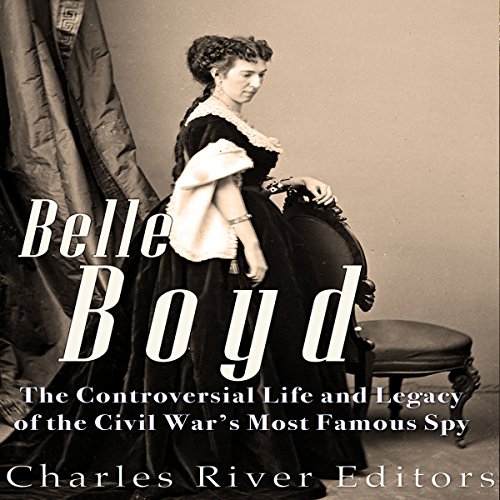 The Controversial Life and Legacy of the Civil War's Most Famous Spy
By: Charles River Editors
Narrated by: Scott Clem
Length: 1 hr and 18 mins
Categories: Bios & Memoirs, Celebrities
3 out of 5 stars 3.2 (5 ratings)

Americans have long been fascinated by the Civil War, marveling at the size of the battles, the leadership of the generals, and the courage of the soldiers. Since the war's start over 150 years ago, the events have been subjected to endless debate among historians and the generals themselves. The Civil War was the deadliest conflict in American history, and had the two sides realized it would take four years and inflict over a million casualties, it might not have been fought. Since it was, however, historians and history buffs alike have been studying and analyzing the people and places that shaped the course of the conflict ever since.

Much about the war remains controversial over 150 years later, and that includes the extent and nature of the spying that took place on both sides. Thus, it is only fitting that the war’s most famous spy, the Confederate sympathizer Isabella Maria Boyd, is one of those people in American history who is as much myth as reality. Part of this is because she lived in an era that is still heavily imbued with a sense of nostalgia and myth, but her own personality is also heavily to blame, for she was what might in modern parlance be called a drama queen; since she was known for serial exaggerations in her work, historians are still trying to separate fact from fiction when it comes to her exploits. In the same vein, there was the matter of the people she surrounded herself with, many of whom needed a mythical figure to attach their last fading hopes for a Confederate victory to. They found such a person in Belle Boyd.

Boyd’s early life was in no way mythical, for she grew up in a lower middle class home in rural Virginia. While some of her more romantic biographers would describe her riding her horse into her parents' elegant dining room during a dinner party, it is unlikely that the Boyd family's home would accommodate a horse and rider within its four walls. Well on her way to fame before she left her teens, Boyd went on to be known to the French as "La Belle Rebelle", and to her own countrymen as "the Rebel Joan of Arc". Some, more impressed with her charms than her brains, named her "the Siren of the Shenandoah", while others gave her the less flattering nickname "Amazon of Secessia".

Ultimately, Boyd became a victim of her own thirst for fame. She found life after the war to be empty, and she spent the rest of her days trying to recapture the sense of satisfaction and excitement that she enjoyed during her brief years as a spy. It cost her two marriages and perhaps even her life; she was far from home when she died, still only in her mid-50s, leaving sympathizers to speculate that her heart gave out under the strain of trying to recapture lost glory.