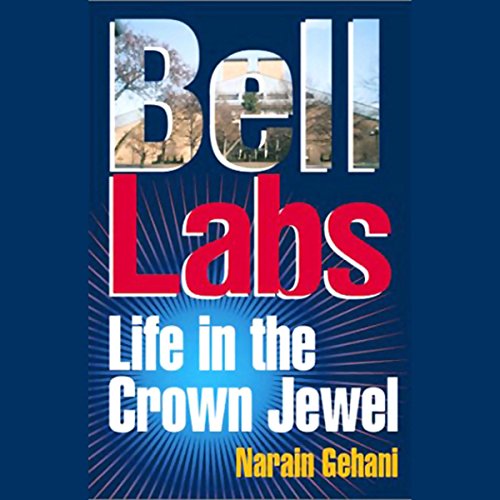 Bell Labs, the greatest research lab of the twentieth century, has been called America's national treasure and the crown jewel of AT&T and Lucent. To scientists all over the world, pursuing research at Bell Labs has long been a dream because of its brilliant scientists, numerous inventions, academic freedom, and plentiful resources. But now, forced by the marketplace, competition, and economic conditions, the world's most prestigious research lab is in the midst of radical cultural change.

Bell Labs: Life in the Crown Jewel tells the fascinating story of the transition Bell Labs is undergoing as it adapts to new business conditions. After AT&T's break up in 1984 as part of the settlement of a government anti-trust lawsuit, the boom years of basic research started to end. A much smaller AT&T, still a giant company, was thrust into the competitive world. The change, slow at first, picked up pace in the 1990s following the next breakup of AT&T, which created Lucent, Bell Labs' new parent. After a few good years, Lucent found itself in financial difficulty in a very tough telecommunications market. Lucent responded by breaking up into smaller companies, which led to a smaller Bell Labs. Lucent's worsening financial condition forced it to downsize with Bell Labs sharing the pain. Bell Labs is now being forced to move faster and further towards helping Lucent's business needs.

Moving from university-style (basic) research to industrial (applied) research is much more difficult than going from industrial research to basic research because industrial research puts constraints on scientists while basic research frees them to explore new frontiers. Bell Labs researchers, who once were free to focus on innovation, research excellence, and prizes, now have to worry about business relevance. The culture of lifetime employment is gone and the pendulum has swung from basic to applied research.

I was hoping to hear a fascinating tale about all the incredible work that went on at Bells Labs and maybe a few interesting antidotes about quirky researchers, but all that was offered was an extremely dull account of the authors tenture at Bell Labs. The author managed to make any attempt at an interesting story hopelessly flop by over-explaining unimportant details and assuming that his readers were on a completely different intellectual level (i.e. completely beneath him).

I found myself continuing to listen just to see if the book really didn't get any more interesting (it didn't)...

It's too bad, because I am quite sure that the Author met and interacted with fascinating people and Bell Labs certainly did a great deal of interesting work (this book doesn't do any of it justice)

As many people have already pointed out, this is a rather dull book. The conflict between 'long term research' vs. profitability is relentlessly repeated. There is a lot of discussion about personnel issues and company politics that exist in all organizations.

The only positive thing I have to say is: If you were interested in Bell Labs minutae, this is your book.

In addition to being boring, the quality of narration is low. It is full of awkward pauses and hesitations, mispronunciations and overlooked punctuation. Example: The narrator frequently pronounces 'programming languages' as though they are two separate entities -- as in, 'Bell Labs was interested in operating systems, programming, languages and compilers' (written as spoken). Problems like these exist throughout the audiobook.

Could have been great - but not

There are some interesting bits - but they are sprinkled throughout the redundancies.

I gave up on this after a couple of hours and the 50th time he reminds us that Bell labs researchers did not like to work with the 'business units' - As a 'researcher' with direct experience in C and UNIX he has a story to tell , unfortunately this is not it . Don't waste your Credit on this.

What a waste of time, energy, and money!!!

In case you are wondering about this book, listen up. It it a gigantic waste of your time, enery, and money to even bother with this book. The author just does not know how to write an interesiting story. The book reads like a technical manual from Bell Labs, and the author just reiterate the same points and stories throughout the book. After about two hours into the book, I just deleted the book from my ipod. Spend your money on someone other book.

perhaps for an insider this might have been useful, but too much talk about jobs and positioning and not enough about the technology.

This book is like listening to paint dry. Like so many other reviewers I expected something completely different. After about 2 hours I gave up; as dull as it is to listen to I can't imagine someone reading the written version.

This is only the second audiobook that I haven't been able to finish. The author manages to make a fascinating story incredibly boring by assuming that the readers care about his management decisions. And with chapter titles like "I Arrive at Bell Labs", you know it is only going to get worse as it plods along. Don't waste your time!

I wish I'd read Greg's comments before I bought the book. I agree with his review entirely!

If you want an interesting book about technology try The Soul of a New Machine, or The Second Coming of Steve Jobs. This book could just as well have been about an accounting firm. We hear tales about downsizing, expense reports, and silly stories about employee's quirks that weren't worth repeating. I've tried and tried to get through this, and haven't succeeded. Save yourself the trouble.

If you're interested in finding out about the history of an incredible lab, don't waste your time with this.

The book is more about the author and how pleased with himself.

It really is so disappointing.