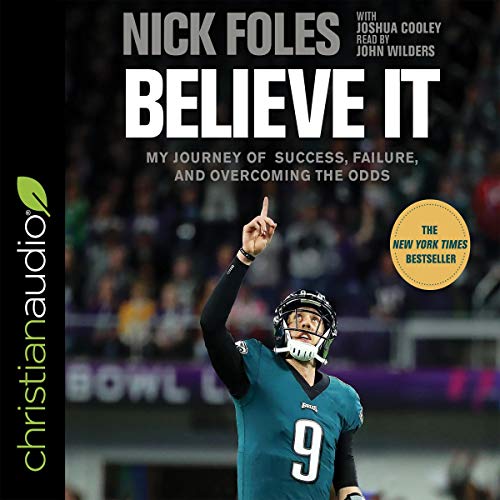 Get ready to defy the odds when everyone’s counting you out.

When the Philadelphia Eagles’ starting quarterback went down with a torn ACL in week 14 of the 2017 NFL season, many fans - and commentators - assumed the Eagles’ season was over.

Instead, Nick Foles came off the bench and, against all odds, led the Eagles to their first Super Bowl victory in history. How did Nick get it done - winning MVP honors, silencing the critics, and shocking the world? How did the man who was on the verge of retiring just two seasons earlier stay optimistic and rally the team to an astounding win? How did he stay ready despite numerous trades and discouraging injuries, able to step up in the moment and perform at the top of his game?

Believe It offers a behind-the-scenes look at Nick’s unlikely path to the Super Bowl, the obstacles that threatened to hold him back, his rediscovery of his love for the game, and the faith that grounded him through it all. Learn from the way Nick handled the trials and tribulations that made him into the man he is today - and discover a path to your own success.

What listeners say about Believe It

Found this to be a very well written and inspiring book. anytime I'm feeling down I can listen to this book and feel encouraged.

From the heart of a true Christian, with the gifts to play football at a high level.

Great book, inspiring story of a Christian athlete that places God first and how the good Lord leads him to success and fulfillment on and off the field

Believe it read it graet so good

Nick's Journey was all about perseverance and overcoming the odds of many kinds. He has found many ways to deal with all the stress and tough work he has been through such as reading God's word (The Bible) spending time with family and friends and sleeping to named a few. As this story can help us in during our hardships in life, this book can always remind us of two important things to remember and that is Never give up and Just keep moving forward.

Great story that encouraged me

Surprising not your typical sports book. It was amazing to see how transparent Nick was ..

As a huge eagles fan, I love Nick Foles, and I went into this book hoping to hear his story of his life and football. I got some of that, and an immense amount of preaching. I'd say a good 60 percent of this book is either preaching or regurgitating bible passages. I know that Foles is a holy man, and that's fine, but if I wanted to read the bible, I'd read the bible. I was just trying to hear his story. Still though, I respect what he has written.

Beautiful story of a man's passion

Love this story of Nick foles and his highs and lows. Full disclosure I am an Eagles fan so I might be slightly biased but I really appreciated his candor in describing his falling out of love with the sport and falling back into love with it.

Such a great Book

One of my favorite books I've listened to. Well written and an easy listen. Very encouraging and reminds you how to be a team player.

A joy to read.

A joy to read. Inspiration. Story of ups and downs. Failing and Succeeding. Humbling. Glory be unto Him...

A good read to get an insight into a current, succesful NFL player... As I'm not overly religious it was humorous to hear the constant praise of God and the Bible verses became a bit preachy... But on the whole a good read.

Pet peeve was the voice kept changing halfway through some sentences, threw me off at first but soon got used to it.

Get it if you've read this far and have a credit to use, probably not worth payment...

Thankyou for everything that you’ve done for the Eagles Nick, your truly an amazing individual, both on and off the field 🙏🙂🦅