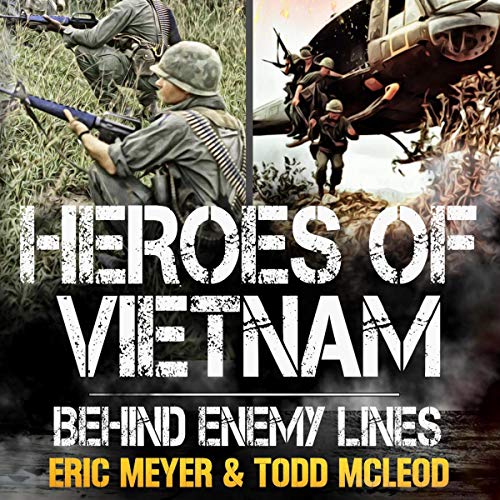 By: Todd McLeod,Eric Meyer
Narrated by: Heath Douglass
Try for $0.00

Rookie Joe Walker, 3rd Brigade, 7th Air Cavalry, was finding life in Vietnam tough. The war is building into a major conflict, yet despite his efforts, he feels like a square peg in a round hole. He can’t shoot straight, missed the bayonet course, and nothing ever goes right. He can throw a mean grenade, but the army made him a rifleman, and they’re determined to make sure he can shoot straight. Or else.

Before they pitched him into the maelstrom of Vietnam, he’d planned to be a major league baseball pitcher. The chances of him surviving long enough to realize his dream are receding fast.

When they hand his unit a mission to go north of the DMZ to rescue a downed aircrew member, he knows his dream is at an end. For, north of the demilitarized zone is a country known as North Vietnam. Along with millions of enemy soldiers just waiting for the chance to kill any American who sets foot on their sacred, communist soil.

A job for the rangers or the Navy SEALs, the men in green faces. The army wants something different, a unit that won't be missed. Led by a newbie lieutenant who is as green as Joe, a helicopter drops them close to their target.

North Vietnam is within spitting distance, and their orders are simple. Cross a flimsy bamboo bridge over a fast flowing river, grab the man they came for, and bring him back. Simple. Until they encounter the enemy, and all hell breaks loose.

Behind Enemy Lines is the second book in Heroes of Vietnam - a fictional war story set during the Vietnam War. The book is a collaboration between Todd McLeod and Eric Meyer, the best-selling author of more than 50 war novels.

What listeners say about Behind Enemy Lines