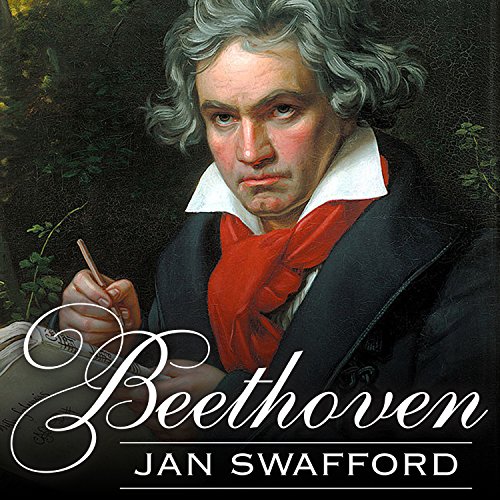 By: Jan Swafford
Narrated by: Michael Prichard
Try for $0.00

Jan Swafford's biographies have established him as a revered music historian, capable of bringing his subjects vibrantly to life. His magnificent new biography of Ludwig van Beethoven peels away layers of legend to get to the living, breathing human being who composed some of the world's most iconic music.

Swafford mines sources never before used in English-language biographies to reanimate the revolutionary ferment of Enlightenment-era Bonn, where Beethoven grew up and imbibed the ideas that would shape all of his future work. Swafford then tracks his subject to Vienna, capital of European music, where Beethoven built his career in the face of critical incomprehension, crippling ill health, romantic rejection, and "fate's hammer," his ever-encroaching deafness.

"Indeed, readers will want to refer to the book often when they listen to Beethoven. A marvelous achievement." ( Booklist)

What listeners say about Beethoven

This is an exhaustive book. Not being a trained musician, I found it a little hard to follow some off the discussions of music theory. And because the author often quoted from contemporary sources certain aspects of the composer's life seems to be duplicated. I found that by printing a list of Beethoven compositions and having that available as I listened, I was able to place my favorites in context. It's hard to imagine a more complete version of a person's life from that period. A fine story well told. Had I been more musical I would have rated it much higher.

The level of details available about his daily life. Letters and manuscripts (many records kept due to conversations written down because of his deafness).

I read other reviews that complained about too much musical composition details. I thought that I would still enjoy that part but found myself eventually skipping through those parts as they could only be enjoyed by another composer. I still enjoyed the book and learned much about Beethoven's life which is what I was hoping to learn.

Very poor choice of reader for this book. The voice and affect of the performer are really spoiling it for me. Much as I want to read this, I'm not sure I can take 39 hours of this narrator's voice.

Listen to Sample Prior to Purchase

This is probably one of the worst audio books I've ever encountered. The voice of the narrator is unpleasant, and he reads in a mechanical, detached way as if he doesn't understand or doesn't care about what he's reading. The tone and cadence are like a bad imitation of the news reels one saw in movie theaters in the 1960s. I have been unable to listen to more than 5 minutes of narration at a time and have now given up on it completely. For the sake of this excellent book, please redo the narration with a more engaged, more vibrant person. Or go all Victorian as Swafford describes Thayer's monumental biography of Beethoven and get a Brit to do the reading.

Wonderful Biography of A Supreme Artist

Would you listen to Beethoven again? Why?

Yes. You cannot separate the music from the person. The author told the story of Beethoven and wove in the analysis of his music synchronized with his life.

What other book might you compare Beethoven to and why?

There are other masterpiece books about Beethoven, but this one gave the most expert analysis of the music.

Beethoven's writing the Heiligenstadt Testament and his death bed.

No film could do justice to such a person.

Mr. Pritchard is an experienced and excellent narrator. His narration was wonderful, except he mispronounced "Pianoforte" 100s of times.

Audio Books Can Hardly Get Any Better than This!

Would you consider the audio edition of Beethoven to be better than the print version?

What was one of the most memorable moments of Beethoven?

Have you listened to any of Michael Prichard’s other performances before? How does this one compare?

no..but very much liked it. (first "American" narrator I have listened to in which I really did like the tone or style of "Accent" and narration)

Would you consider the audio edition of Beethoven to be better than the print version?

This is a wonderfully in depth examination of Beethoven's life and his times. My only complaint is the occasional mispronunciation.

Way too much time was spent on the verbal detailing of individual works. I would far more prefer to listen to the works themselves than get one persons descriptive take on them. However, the information about the historical period and Beethoven's peculiarities and character traits, was good. The detailing of personal events involving Beethoven the composer and Beethoven the man, were also good. There is a very obvious "bent" in the author's account. BUT, there would be a very obvious "bent" if I wrote about Beethoven too.

I’m not knowledgeable about music, but this book keep me coming back. Interesting, engaging and informative. It was superbly performed.