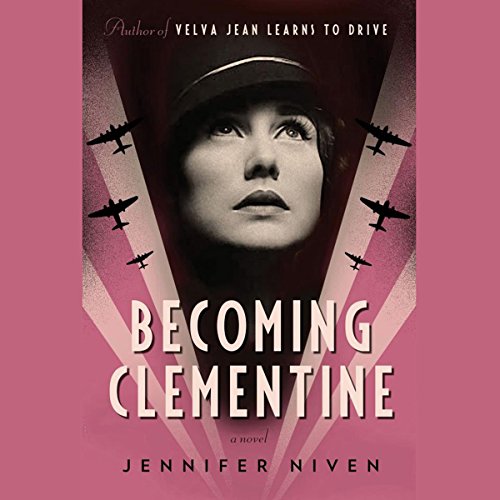 By: Jennifer Niven
Narrated by: Käthe Mazur
Try for $0.00

England, 1944. An American volunteers to copilot a plane carrying special agents to their drop spot over Normandy. Her personal mission: to find her brother, who is missing in action. Their plane is shot down, and only she and five agents survive. Now they are on the run for their lives.

As they head to Paris, the beautiful aviatrix Velva Jean Hart becomes Clementine Roux, a daring woman on a mission with her team to capture an operative known only as Swan. Once settled on Rue de la Néva, Clementine works as a spy with the Resistance and finds herself falling in love with her fellow agent Émile, a handsome and mysterious Frenchman with secrets of his own. When Clementine ends up in the most brutal prison in Paris while trying to help Émile and the team rescue Swan, she discovers the depths of human cruelty, the triumph of her own spirit, and the bravery of her team, who will stop at nothing to carry out their mission.

About the author: Jennifer Niven is an author and screenwriter. Her first book, The Ice Master, was named one of the top 10 nonfiction books of the year by Entertainment Weekly. Her second book, Ada Blackjack, was a Book Sense Top Ten Pick. Her memoir, The Aqua Net Diaries, was optioned by Warner Bros. She lives in Los Angeles.

“ Becoming Clementine is a spirited tale of courage, honor, and loyalty. Jennifer Niven succeeds in not only illuminating an important and little-known role played by women during the war, but creating an unforgettable and heartfelt story that will resonate with readers far and wide.” (Pam Jenoff, best-selling author of  The Kommandant’s Girl)
“Jennifer Niven has done something I didn’t think was possible. She has topped Velva Jean Hart’s first two stirring adventures with a third that is an epic - powerful, gripping, tragic, romantic, and inspiring.  Becoming Clementine, like all Niven’s books, is a page-turner of a story, with its riveting, insightful, on-the-ground perspectives of World War II. The time, the place, and the events are as authentic as Velva Jean herself. Spellbinding.” (James Earl Jones, award-winning actor)
“In her third book featuring hardscrabble Appalachian girl Velva Jean Hart, Niven delivers a heart-stopping tale of wartime intrigue, romance, and high adventure. Given Velva Jean’s preternaturally wise Southern outlook on human nature, one wonders if Scout Finch Goes to War wouldn’t be a more appropriate title.” ( Romantic Times, Top Pick)

What listeners say about Becoming Clementine

I enjoyed this book so much. I loved the book before this one, Velva Jean Learns to Fly, and I could not believe that this book was even better! The historical component of it is so fascinating and it got to the point where I had a hard time turning it off. There is a different narrator in this book than the first two; I am sure it is because they needed someone with a good French accent. At first, it bothered me a little bit because I had gotten used to Velva Jean's backwoods twang, which the other author did really well, but after a short while, I got used to this narrator and it was fine. The only thing that bugged me a little was that Velva Jean's friend, Gossie, is from New England and in the last book she had the classic New England accent - in this book, she has more of a Southern accent, but I guess you can't ask one narrator to master every accent! I encourage every woman (and it certainly wouldn't hurt a man) to listen to this series - start with Velva Jean Leans to Drive and keep going. I have already downloaded the next book in the series - which I think is the last one - so I am going to relish it!

narrator - she was fine but not nearly as good as

I really wish they would have kept the first narrator throughout. as a down home girl who has made her way into the bigger world, it was refreshing to have that first voice. the later voices weren't bad but the story wasn't as good as it could have been. I wish I'd have read rather than listened.

I thoroughly enjoyed Becoming Clementine!!! It kept me in the moment through the entire story. Once it was over I felt like I had been there, in the moment, and had completed my mission in the end. Though there would be more moments to come in her life, Velva Jean was ready to move forward and not hang on that life and so there was no cliff hanger (which I hate). When I read, I want to finish a story in case I don't get to go to the next part of the story for some reason. I am now going on to the first 2 books since I found there were 2 preceding novels. I highly recommend this book to you all. :)

I loved the first two on the series, and enjoyed this third just as much. I love the introduction of the subject of ww2, and am now purchasing the fourth in the series!

This has been a great series, after the first book I was really disappointed about the narrator being different in each one. The first narrator was so wonderful and made the second book a little disappointing but after I got over it I realized that the velva Jean that was a spy was grown up and needed to be different. Velva Jean, and all the characters in these books are wonderful. you won't be sorry if you enjoy family, excitement and history. Great series, I hate it when each one ends it's so hard to find a book or series that is this good cad can't was wait to start the next adventure of Velva Jean, maybe she'll finally be a singer and find her true love

Enjoyed the third in the series

The storyline in this book was interesting - although it was uncanny how Velva Jean/Clementine just happened to escape certain death, time and time again, often through odd coincidences or circumstances out of her control. The author did a good job of explaining the anxiety that comes from simply living in a war zone, as well as some of the horrors of war. Her reunion with her brother, Johnny Clay, was just too coincidental to ring true.

Her "romance" with Emile seemed to come out of nowhere and was simply not believable. The entire book was entertaining, as long as you don't think too much and just have fun with it.