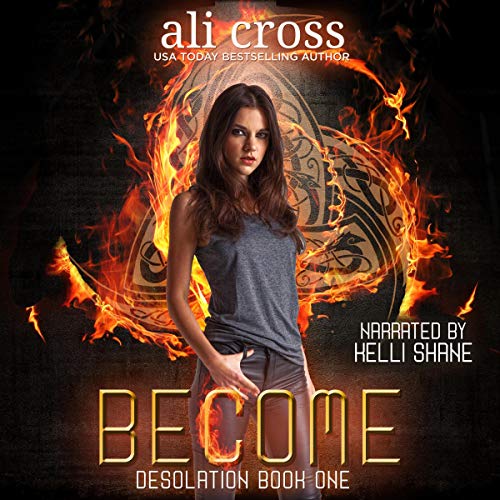 The devil’s daughter wants nothing more than to stay in Hell, where it’s cold and lonely and totally predictable.

Sixteen-year-old Desolation Black is an expert at keeping her emotions locked down tight. The last thing she wants is to return to Earth where there’s a girl she’s compelled to save and a boy whose touch ignites a terrifying spark of goodness deep inside of her.

But the future of Asgard depends upon the choices Desi makes. If she follows in her father's footsteps, she'll undo Odin's great plan and everyone who's ever lived might never Ascend. If she rejects her father, it could mean the end of everything and herald the prophesied Ragnarok.

If Desi could, she wouldn't choose at all.

Fans of Buffy the Vampire Slayer and Lucifer will love this coming-of-age adventure with a touch of romance.

What listeners say about Become

Women face evil in the world every day!

Would you listen to Become again? Why?

I actually listened to Become twice. It left me questioning the facts or fictions in the world today and I wanted to be doubly clear how this story worked them out.

What was one of the most memorable moments of Become?

The female population needs an abundance of reading material with women at center stage. And Desi, the heroine, struggles with internal conflict and challenging key relationship issues. Often our parents seem like gods or angels to us when we are young and the flip-side the moment we seek our independence. Introducing her father as overbearing, yet the ultimate evil force in the universe as well is a notable example of just how difficult that relationship can be for a teen.

Thoroughly enjoyed taking this journey with Kelli Shane narrating. Her voice comes across as soothing, confident, and reassuring. Kelli adds character to the heroine herself.

The interesting twists on Christian based literature and Norse mythology has left me questioning the origin of particular stories told in my own childhood. Were the stories I remember from childhood historical or were they fiction combined with fact? A myth or sacred narrative of a culture explains how humankind assumed their present state. So, which part is fact and which part is fiction? I would love to be able to ask the storytellers.

I’m a new fan of this author and looking forward to reading or listening to more of her books. The subject matter is right up my alley.

I really loved hearing Become by Ali Cross! It was such a great book and I can’t wait to get started on the next story in the series. I really loved the conflict that desi has between who she is and who she thinks she’s destined to be. I love that she learns how to trust herself and that she has people who love her and that she truly comes to believe in herself. I love
That she is willing to sacrifice for others and that she ends up being better for it. I love the whole
Story it was so so good! Ali Cross is an amazing writer!

Couldn't get into the story or the characters

I tried reading and listening to this story but I couldn't get into it at all. It wasn't for me.

Ever heard the saying Loki is the devil?

Oh my I absolutely loved the fact this writer took that saying and made one heck of a story out of it ! It's superb writing and wonderful narrative as well!

I really enjoyed Become: Desolation #1. The story had great pacing keeping me engaged at all times. The characters are well developed, likeable and relatable. Kelli Shane did a superb job at narration with easily distinguishable character voices. I am looking forward to more in this series!!

One of a kind YA novel

Would you consider the audio edition of Become to be better than the print version?

I haven't read the print version yet (it's on my list of TBRs for this month), but I'm sure both are enjoyable in their own way...much like any other set of print/audio editions.

I really enjoyed the way Ali Cross flawlessly managed to combine characters from both Norse and Christian beliefs.

I liked that she spoke clearly, with slight inflections for the different characters she was reading for, and the tone of her voice well represented the way I'd imagined Desi's voice would have sounded.

Maybe, but realistically speaking, since I enjoy reading several stories at one time...there are just not enough hours in the day. I actually broke my listening sessions for this audio edition up into several evenings, but found I enjoyed it just as much as I would have if I'd read it all in one sitting.

I am personally not a religious person in any way, shape or form...but I found I was still able to enjoy listening to this audiobook with no hangups. I found it a very enjoyable read, and I look forward to exploring more editions of this series very soon.

This was a great story. I made a good choice for my 1st audible book

Fantastic Urban Fantasy at its Best

The story was well crafted and the characters brilliant. I really enjoyed the mix of Norse Mythology with Christian Cannon. Ali Cross had made me a fan for life.

Awesome book that should be made into a movie

Fresh new take on angels and demons set against a backdrop of Norse mythology. Compelling characters, Buffy-like epic smack-downs, big-bad betrayals and a few apocalyptic events and you have Become. Move over Thor, Desi kicks more butt and is cooler while doing it.

As a huge Joss Whedon fan I can say that Ali is on track to pick up the mantle.